Time for Europe to stand on its own two feet 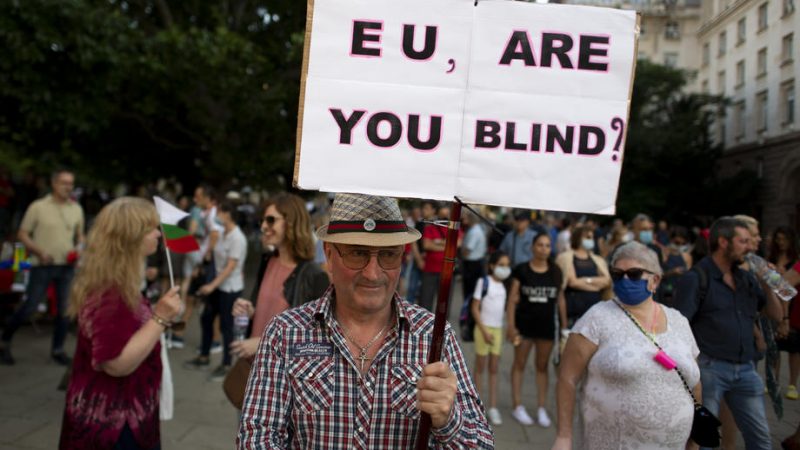 A man holds a sign as people take part in an anti-government protest in front of the Council of Ministers in Sofia, Bulgaria, 24 July 2020. Thousands of protesters met in downtown Sofia every day for months in row another, demanding the resignation of the prime minister, Boiko Borisov, and the prosecutor general, Ivan Geshev, over claims of corruption and calling for early elections. [EPA-EFE/VASSIL DONEV]

The way the US recently applied the Magnitsky Act in Bulgaria may have been beneficial for the country struggling with its mafia, but was a humiliation vis-a-vis the EU, Dick Roche writes.

Dick Roche is a former Irish Minister for European Affairs and former Minister for the Environment. He played a key role in Ireland’s 2004 EU Presidency, which saw the biggest ever EU enlargement when 10 countries acceded to membership on 1 May 2004.

On 2 June 2021, the United States inserted itself into Bulgaria’s already febrile political environment when, just days before polling day, the US Department of the Treasury and the US Department of State announced a series of sanctions under its US Global Magnitsky Act.

The US Treasury sanctioned three Bulgarian citizens and 64 entities involved in their networks for “their extensive roles in corruption in Bulgaria.”

On the same day, the State Department designated five Bulgarians, the three sanctioned by the Treasury and two Bulgarian public officials, as ineligible to enter the US. The wives, partners, and children of those sanctioned, including one official’s minor son and daughter, were also rendered ineligible to enter.

For the thousands of Bulgarians who had taken to the streets during 2020 to register anger and frustration about corruption, flaws in their country’s judicial system, the power of oligarchs, and a range of other issues, there can be little doubt that the US intervention was welcome. During the protests, the Bulgarian President, Rumen Radev had commented, “the Bulgarian mafia has achieved the impossible and united honest people against it.”

The American intervention, however, raises two questions for the EU. First, didn’t the EU have arrangements put in place when Bulgaria became an EU member not delivered reform to the satisfaction of the Bulgarian people? Second, it again highlighted the problem the EU faces with the US implacable belief that it has the right to intervene at will in European affairs.

Where was the EU?

When Bulgaria joined the EU, it accepted that to fully deliver on the obligations of EU membership; it must reform its judicial system and put in place effective measures to address corruption and criminality. Mutually agreed benchmarks were set as to what needed to be achieved. A Cooperation and Verification Mechanism [CVM] was established to monitor progress and support reforms.

The US intervention raises fundamental questions about the CVM process.

For over a decade, Commission reports suggested that Bulgaria was heading in the right direction; that progress was being made. A 2018 report concluded that key benchmarks on the judiciary and the fight against organised crime “could be considered provisionally closed”.

The frustrations demonstrated by the people of Bulgaria question those findings.

In a short debate in the European Parliament in September, last MEPs called the US intervention a “wake-up call”, accused the Commission of being lax, slow to act, and being over “intergovernmental”. The question was posed whether the US was terribly misinformed or had the Commission been acting with its eyes “wide closed”.

Responding to that debate, Commissioner Johansson emphasised that the fight against corruption was a Commission priority, listed actions taken or underway, including the EU Whistleblowers Directive, and promised that future EU Rule of Law Reports would contain “stronger and sharper” recommendations.

Improving the CVM mechanism is within the capacity of the Commission. Well, focused actions could demonstrate that the EU can deliver reform to Europe’s citizens. Concrete actions, backed by a good-faith debate, would also improve confidence and assuage concerns about the EU’s over-focusing on issues in some of the newer member states could be addressed. With the right will, the concerns expressed in the EU Parliament could be addressed.

The second issue, perennial US overreach, is less easy to resolve.

Does US rule the world?

The US decision to intervene in the closing days of an election in a European state, without prior consultation, was an extraordinary departure.

Determining the standards that apply to the governance of Bulgaria is a matter for the Bulgarian people. Whatever its other problems, Bulgaria is a democracy. Its citizens have the sovereign right to judge their political leaders and to do so without third-party interference or ‘assistance’.

The CVM arrangements give the EU a specific role in assisting Bulgaria to reform its judiciary, address corruption and fight organised crime.

Unlike the EU, the US has no legitimate agency in these matters.

The press statement of the US Treasury explained that the action being taken demonstrated the will of the United States to penalise public officials and those connected to them “who use government institutions for personal profit.”

While laudable, those sentiments’ good intentions do not extend extraterritorial legitimacy to US actions.

As the US Chief Justice said in a 2013 case, where the Supreme Court issued a unanimous judgment, “United States laws govern domestically, but do not rule the world.”

A question arises as to the potential long-term negative impacts of the US actions in Bulgaria’s political life.

In publishing sanctions just days before Bulgarian voters went to the polls, the US demonstrated a willingness to intervene at a sensitive point in the democratic process of a sovereign country.

It also demonstrated a disregard for the potential long-term ‘legacy’ of its intervention.

The US has a long and tragic history of interventions in the political life of other nations. All too frequently, when the geopolitical considerations of the moment pass, a dismal and divisive legacy remains.

Recently, the US has experienced its own highly charged domestic debate about “Russian interference” in its elections. That debate has injected extraordinary toxicity into US politics.

Whether the US intervention will produce a similar outcome in Bulgaria remains to be seen, one hopes not. The intervention, however, is all the more remarkable given the reaction in US politics to the suspicion of external interference in its own democratic process.

The US intervention also smacks of double standards.

It is reasonable to question whether the United States, where billions of dollars from powerful lobbies impact elections, shape the content and application of law and generally grease the wheels of politics, is best positioned to sit in judgement on the corrosive role of money on the politics of another country.

In addition, state corruption is not unknown in many countries with which the US enjoys close relationships worldwide. The question arises – why focus in a uniquely intrusive way on an EU member while being willingly aligning with questionable regimes elsewhere?

Time for Europe to stand on its own two feet

In his EU Presidency speech on 9 December, President Macron spoke of the need to move from a Europe of cooperation inside its own borders to a “powerful Europe” that is fully sovereign, free to make its choices and be master of its own destiny.

President Macron did not specifically focus his remarks on the United States; it is not hard to read a concern about US overreach between the lines.

Over the years, the United States has consistently overplayed its ‘sanctions hand’ in Europe. That is a bad mistake. There comes the point where patience with even the closest of friends runs thin. US policymakers might be wise to keep that in mind.

This latest example of US overreach may just be the right time for Europe to decide to stand on its own two feet.