Time for Germany to get vocal on European security 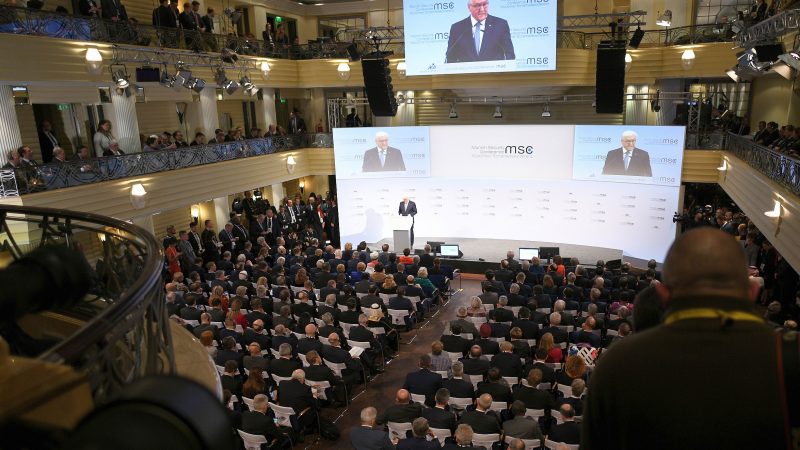 Anna Wieslander offers her reflections on the Munich Security Conference, held last weekend against a backdrop of European confusion about its role in the world.

To enter the hotel Bayerischer Hof during the Munich Security Conference (MSC) is over-whelming. As a Swede, I am not used to crowds and I am uncomfortable. But there, a familiar face, a man so tall that he can hardly be missed, the former Prime Minister of Sweden, Carl Bildt.

We hang out over coffee and loads of macaroons, and gradually I get used to the beat of the 56th MSC. It hosts some 40 heads of states, over 100 foreign and defence ministers, as well as members of parliaments, CEOs and 1,300 journalists. And then people like me, experts from think-tanks and academia.

The main characteristic of the conference is the collection of world leaders, who make speeches in the grand plenary hall.

It is fascinating to compare German President Frank-Walter Steinmeier’s gloomy outlook of the world with US State Secretary Mike Pompeo’s scout-like cheering that “the West is winning!”; to hear US Defence Secretary Mark Esper outline the Chinese threat in detail, while French President Emmanuel Macron hardly mentions China, but talks extensively on Russia.

And when Russian Foreign Minister Sergey Lavrov enters the stage, he claims that the European military budgets are “on steroids” and that it is time to let go of the “Phantom Russian threat”.

The theme of the conference is Westlessness, which nobody but Europeans, who love to indulge in problems, could dream of coming up with. Many Americans in the corridors are furious about it: “What does it mean? It is not optimistic enough!”

On the other hand, after all, the MSC is a German conference, and the pessimistic tone resembles the feeling of powerlessness in Germany.

Germany is struggling to keep the EU together despite the loss of the UK, to heal a halting transatlantic relation, to tandem with an ambitious and restless France, and in addition, to overcome domestic political inertia, most lately fuelled by the stepping down of Annegret Kramp-Karrenbauer as the next Chancellor candidate.

In sum, the challenges are many and the level of support low. As I listen to the German voices at the MSC, it strikes me, that Germany could do with some more help. Here, smaller Europeans states could make a difference.

On security and defence, the Nordic, Baltic, Central and Eastern European states have common views: on the threat from Russia, on the importance of the transatlantic link.

They also share scepticism towards the French vision of European autonomy, which is too far-reaching – and too French – for their taste. Rather, they align with the German emphasis on a European pillar within NATO, and sympathize with the German efforts to use multilateral decision-making.

They are, however, not as keen as the Germans to discuss abstract concepts such as “strategic autonomy”, a “European Army”, and “a new architecture of security and trust with Russia”. For smaller states, it is a luxury they cannot afford. Rather, it causes confusion and hampers action. A

Additionally, it drives the most important ally, the US, nuts. The US listens to the European debate but gets no answer to its questions; what problems do you want to solve? And where is the money? To be fair, the Americans are a bit schizophrenic when it comes to European defence.

While the US has called for greater European responsibility for its security since the 1960’s, once the Europeans move, the Americans get grouchy and suspicious. There is definitely room for a more constructive American approach. Thus, in a way, the Americans need help, too.

In order to break the deadlock, Europe should close the autonomy debate and settle with the fact that the majority of European states do not want to go as far as France. Strengthened capacity to manage European security by own means, yes, but no de-coupling from the United States.

To make that happen, Germany must become more vocal in the debate on a vision for European security and defence. In this process, Germany needs support from the Nordic, Baltic, Central and Eastern European states.

The trick here is to get these countries better coordinated on their common interests, to stay aligned, improve communication channels with Berlin, and work systematically to pursue these interests.

Moving from talk to action in Europe would comfort the Americans and pave the way for concrete steps forward towards a European pillar in NATO, developed in harmony with deepened defence cooperation in the EU.

As the MSC closes on Sunday, I stumble out of Bayerischer Hof, sleep-deprived after three intense days. On the train back to Garmisch-Partenkirchen, where I temporarily stay at the George C. Marshall Center to do research, I contemplate as the peaceful Bavarian landscape passes by.

Despite Corona-virus, climate change crisis and the apparent risk of a new arms race spiral, I feel strangely energized. The talented and inspirational people I have met during the weekend have sparked a sense of hope, of restlessness in me. Let’s do this, it is possible. That is a pretty good result from a conference for a think-tanker. Well done, MSC.