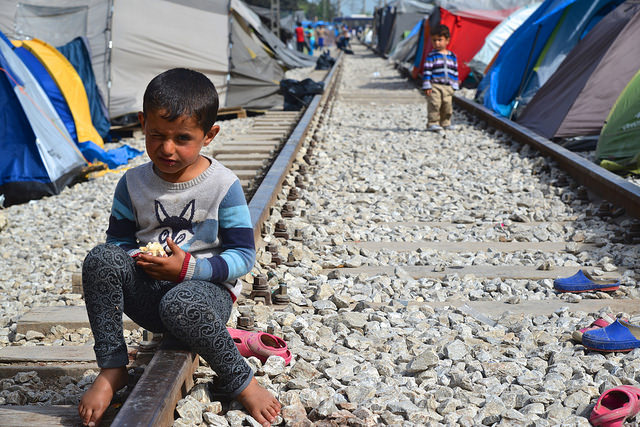 Refugees at the Idomeni camp on the Greek-Macedonian border. [Mario Fornasari/Flickr]

More than 2,000 of the 8,000 refugees that were trapped for several months in the camp of Idomeni, on the border between Greece and FYROM, have been transferred by bus in the last two days to new reception centres in Greece. The situation in Idomeni was absolutely unacceptable and our priority must be an immediate solution to the humanitarian crisis in this no man’s land, since the closure of the borders along the Balkan route.

The transfer of these people to the new, decent and well-organised reception centres should have been done adequately long ago by the Greek authorities. Instead, Idomeni has become a backdrop for police raids (on both sides of the border), disinformation (most of the people transferred yesterday and today were not even aware of their destination) and, in general, of deplorable living conditions (hygiene, medical care, food) for the thousands of people blocked there.

The European Union and member state governments have direct responsibility for what has happened in Idomeni and what is happening in the other crisis points of Greece where refugees are being accommodated, on the islands and the mainland. The EU has not provided the help and support that Greece needed, even though everyone knew it was impossible for the Greek government to effectively manage the support of tens of thousands of refugees without significant help. Everyone knew that Greece was already a bankrupt country with an internal humanitarian crisis due to the economic crisis.

Many of the EU member states have shamelessly used the Greek crisis and the rescue plans to destabilise both the government and the leftist coalition led by Syriza. In this regard, we must remember that experts and Nobel laureates in economics agree that Greece has been the victim of the policies and diktat cuts imposed by the Troika. Moreover, with few resources and virtually no European aid, Greece has had to manage the arrival of 857,363 refugees in 2015 and 156,117 so far in 2016 (up to 22 May).

The question is why these people are now sent by bus to half-finished reception centres in Greece, when the European Union promised to relocate them throughout the European territory. The answer, of course, lies in the absolute lack of political will of the other EU member states to address the arrival of refugees fleeing wars, persecution or hunger with solidarity, justice and dignity. The number of relocated people in the EU is totally ridiculous and unacceptable: less than 1% of the 160,000 agreed and promised at the European Council in September 2015. The answer must also be sought in the disastrous foreign policy (political, military, economic and commercial) of many of the Union’s member states, which have caused or fanned the flames of many of the conflicts in the Middle East that have displaced so many people.

In the absence of political will by the rest of the member states, the priorities of Alexis Tsipras’ government are appropriate: the people stuck in Idomeni (and the ones who are in other camps, petrol stations or badly prepared and saturated centres) should be relocated to centres where accommodation, food, medical services and education for children are covered and guaranteed. They must also be given access to all the information and services they might need during the registration and asylum process. Tension and instability in neighbouring FYROM must be defused, traffickers and mafias in Idomeni and its surroundings must be tackled and the international rail traffic suspension that has severely affected the Greek treasury must be ended.

Solving the serious humanitarian problems is crucial; the European Union needs to assume its responsibility urgently. Citizens must demand more from their governments. They must reject those that are unable to take responsibility for even the simplest agreements and commitments. We must claim all rights for all people, for the migrants and refugees trapped today in Greece and other European states, which have closed the borders and given Turkey the key, instead of opening legal and safe arrival pathways for these people. Turkey, a country with a shocking record on basic fundamental rights and the treatment of the Kurdish people.

2 responses to “We must solve the humanitarian crisis in Idomeni”