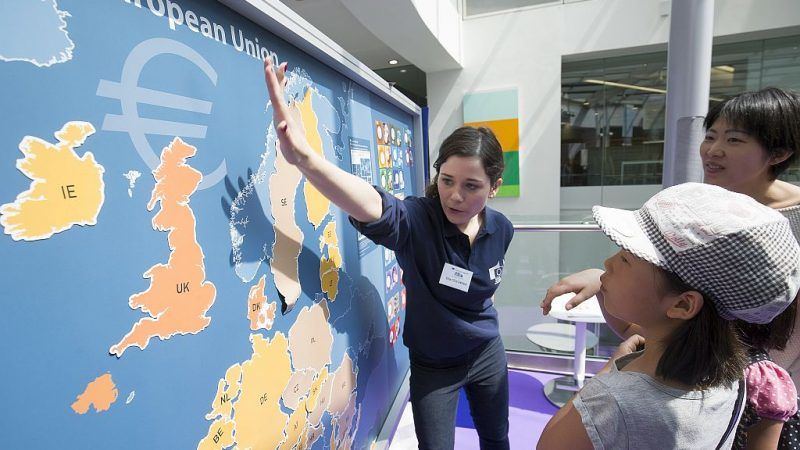 A staff member explains to a family a map of European countries at the EU Commission in Brussels, during open door days on 28 May 2016. [EPA/JULIEN WARNAND]

Numerous analyses of democracy have shown that democracy is under stress around the world, not least in the European continent. Books with titles such as ‘How Democracy Dies’ or ‘The End of Democracy’ hitting bookshelves exemplify the current mood, writes Ken Godfrey.

Ken Godfrey is the executive director at EPD (European Partnership for Democracy.

Based on experience from supporting democracy around the world, there are at least three parallels between politics in Europe in 2018 and the state of representative government in so-called developing democracies. These are the constraints of globalisation on policy-making, equating elections to democracy and a rise in identity politics. There are likely to be others.

Technological change and augmented economic liberalisation, coupled with an increase in supranational decision-making, have increasingly restricted the policy choices available to decision-makers in nation states around the world.

This is particularly the case in the European Union where supranational institutions are most developed but it is a trend around the world due to economic integration.

Both sides of the political spectrum in the UK have highlighted the need to take back decision-making from the EU to realise policy agendas. Italian and French politicians have done the same. The irony of this is that European politicians are finding themselves in a position familiar to leaders of developing economies.

Whether in need of liquidity from the IMF or at the mercy of foreign direct investment, states from Africa to Asia have suffered from significant policy constraints over the last half-century.

In Latin America, such constraints played an important role in transforming the political systems of Argentina, Bolivia and Venezuela in the 2000s. As policy freedom comes under pressure from increased liberalisation and integration, the consequences for democracy at the level of the nation-state are inescapable.

An over-reliance on elections

Secondly, for years democracy supporters have lamented the fact that ‘transitions’ to democracy have been stuck in a grey zone of competitive authoritarianism or electoral democracy where countries are neither fully democratic nor fully authoritarian.

These electoral democracies feature elections as a fundamental component of the political system but are missing other checks and balances that are vital for a functioning democracy.

Despite the fact that these elections are often rigged, they create the veneer of legitimacy that allows these regimes to present themselves as a respectable member of the club of nations. Think Russia under Vladimir Putin or Cameroon under Paul Biya.

The principle of democracy is much deeper than elections and autocrats know this all too well. Victor Orban and the Polish Law and Justice Party have used victory in elections to trample on democratic institutions and basic freedoms to different degrees.

The supremacy of elections over other elements of a democratic system has also been expressed in the UK regarding the role of Parliament in Brexit negotiations and by Donald Trump with regards to the role of independent media. Such behaviour would come as no surprise to citizens of electoral democracies around the world who have lived with such behaviour for much longer.

The third parallel – identity politics – is a feature of the general rise of populist rhetoric and the notion of the ‘people’, a moral appeal that is heavily dependent on identity. The ‘people’ is a loosely defined notion but often draws on elements of collective identity which can be religious, racial or linguistic.

For many years democracies around the world have grappled with the problem of the mobilisation of voters on ethnic grounds – from Kenya to Lebanon, to Cote d’Ivoire, the use of identity politics has led to a profound polarisation of politics.

In the EU, the use of voter identity is predominantly employed by parties on the far right, skilfully combining anti-EU messages with old-fashioned nationalism. Yet, it is not confined to a particular ideology. The use of identity politics poses specific challenges for democracies, primarily because it tends to reduce the potential for cooperation, heightening polarisation and limiting compromise.

So what is to be done?

Above all, there is a need to improve our understanding of European support for democracy in Europe and elsewhere. Without it, there is a risk that efforts to defend and renew our democracies are wide of the mark.

However, what is already clear is that it is time to end the chauvinistic thought that political learning flows in one direction. European democracies are far from dead – but they have much to learn from what has transpired under political systems outside the continent in recent decades.