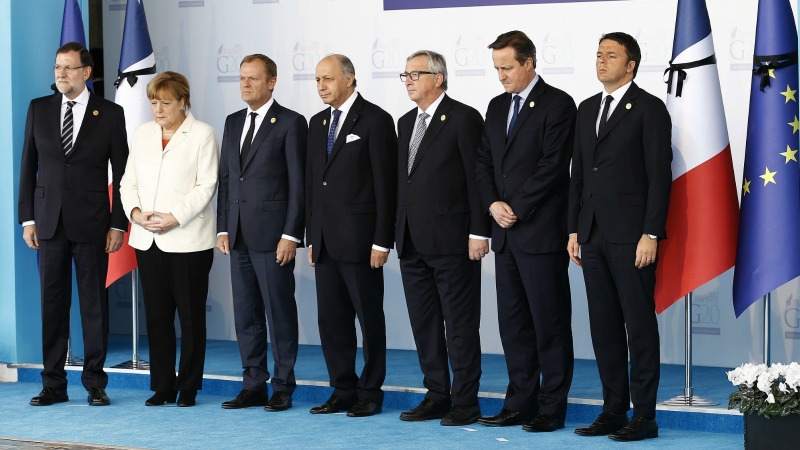 EU leaders observe a minute of silence for the Paris attack victims at the last G20 summit, which took place in Antalya, Turkey, on 16 November 2015. [G20 Turkey 2015 / Flickr]

Fraser Cameron is Director of the EU-Asia Centre and a senior adviser at Cambre Associates.

Although Europe will provide a majority of the global leaders around the G20 table in the Chinese city of Hangzhou this weekend it is by no means clear that they will play a dominant role. The EU (represented by Tusk and Juncker) will be supplemented by Merkel, Hollande, Renzi and May – the latter making her debut on the global stage.

Many eyes will be on the new British prime minister hoping to secure some guidance on how she intends to dispel the uncertainty surrounding Brexit. But the briefing from London suggests that she is unlikely to say anything concrete, even regarding when Article 50 will be triggered.

The EU approaches the summit in defensive mode, shaken by Brexit, the refugee crisis and on-going structural problems in the Eurozone. Leaders will spend more time haranguing China about steel over-capacity than discussing global issues on which they only have a shaky consensus.

This will also be the last summit for President Obama who is struggling to save the trans-pacific partnership (TPP) agreement against a growing antipathy towards free trade in the US. If Trump wins in November there could be a bonfire of FTA deals. And even if Clinton wins she will find it very difficult to persuade her own party to support trade deals whether with Asia or Europe.

The summit also takes place against a background of slowing growth, even in China which has provided the strongest motor for the global economy in recent years. It is clear to all leaders that without steady, inclusive and sustainable growth many of the big political issues cannot be resolved.

As host, China is making a major effort to secure agreement on a large number of dossiers, many of which have little to do with global growth. Leaders are set to adopt over 20 agreements, statements and declarations prompting one Sherpa to remark that ‘Beijing is going for quantity over quality.’

The three main issues on the table are how to ensure the global growth which is tied to the supply-side reform agenda. How to stem growing protectionism and provide a level playing field for investments? And how to agree on tangible measures to strengthen the global financial system against renewed crisis?

Most economists agree that relying on monetary policy alone to stoke the global economy is no longer a practical option. Zero interest rates and printing money have shown their limitations. Tackling structural reforms is key but in Europe there are wide differences in whether let alone how to achieve this goal. The UK and Germany are at one end of the spectrum – France and Italy at the other.

Although the EU will be bashing China over steel it should also give a boost to the flagging bilateral negotiations on an investment agreement. Trade is now intimately connected to investment and the world needs to secure a global investment regime. The Chinese should have a special interest in securing such a regime as their investments in Europe have quadrupled in the past five years. But as the row over the postponement of a decision on the Hinckley Point nuclear plant demonstrates there are huge sensitivities to consider.  Theresa May can be expected to get an earful from President Xi on this particular issue.

Finally the summit has to set an agreed strategic direction. In recent years it has commissioned too many reports and trespassed too much on the turf of other global bodies. Rather than continue down the bureaucratic path and provide endless meetings for sherpas and think tankers the G20 needs to send a clear message that it is not only capable of concentrating on the big picture but it can take practical steps to translate policies into actions that can be understood by the public.

This is a tall order as international summits receive scant media coverage unless there is a dust-up between participants. But Tusk and Juncker should report to the European Parliament on the outcome of the summit and demonstrate the links between the EU and global agendas. As Germany is the next host of the G20 (in July 2017 in Hamburg) the EU should have an increased interest in ensuring that its views are heard at the highest global level.

One response to “G20 is a test for Europe”