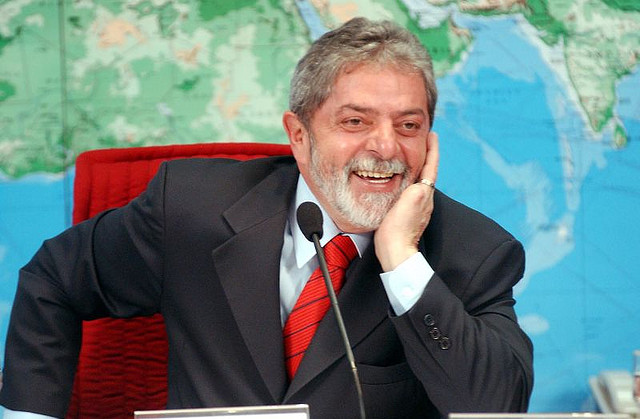 Lula is the former President of Brazil [Glauber Ribeiro]

The former Brazilian president has shared his vision for Europe, calling on the continent’s progressive forces to offer hope and perspective to the most vulnerable parts of society, rather than leave them in the far right’s hands.

Luiz Inácio Lula da Silva was the 35th President of Brazil, as well as a founding member and former President of the Partido dos Trabalhadores (Workers’ Party).

I believe that the construction of the European Union is not just a European legacy, but rather part of the world’s heritage. It is a political institution that inspires countries to work together and increase cooperation and integration in their regions. It was the inspiration for South America with Mercosur and the Union of South American Nations, and for Africa with the African Union and the regional economic communities that are now engaged in developing the continent. It is an amazing achievement that countries that have been at war for centuries, begun to work together peacefully to resolve their differences through dialogue and politics and not by force of arms.

Europe has come a long way

It is perhaps difficult to perceive at this moment, especially from inside a Europe that suffers from unemployment and the loss of worker’s rights after years of economic crisis, which dates from the collapse of Lehman Brothers in 2008. Especially for a generation that had the good fortune to grow up in a developed society and largely did not have to suffer the pain of war. But, just as it is advisable to step back some distance in order to discern the magnitude of a giant monument, certain achievements are only clearly visible when seen from a distance and with a broader perspective of time.

The social rights and the standard of living that Europeans enjoy are still a distant goal for the populations in the majority of countries in the world. The social welfare state is a great achievement, the result of the struggle of generations and generations of workers. We in Latin America, are still struggling to achieve part of that which you, in Europe, must fight to protect against opportunistic initiatives to reduce rights that arose with the economic crisis.

Working people, the middle class and immigrants cannot be held responsible for the crisis caused by the irresponsibility of the financial system. Banks were too heavily leveraged, with huge speculative investments, rather than responsible and productive ones. It cannot be left to the most vulnerable segments of our society – the immigrants, the retirees, the workers, and the countries of southern Europe – to pay the bills for the greed of few.

The brutal adjustments imposed on the majority of European countries – which has been justly called “austericide” – has delayed the resolution of the crisis without reason. The continent will need to have vigorous growth to recover the dramatic losses of the last six years. Some countries in the region appear to be emerging from the recession, but the recovery will be much slower and much more painful if the current contractionist policies are continued. More than imposing sacrifices on the European population, these policies are prejudicial even for those economies that managed creatively to resist the crash of 2008, such as the United States, the BRICS, and a large share of the developing countries.

We need a new utopia

In order to overcome this crisis, we needed in 2008, and still need today, more political than purely economic decisions. It is essential to understand and explain to the peoples the origins of the current crisis. Politics, still analog in a digital world, must be renewed to engage in a dialogue with society to identify the problems and to create new solutions. Political decisions cannot simply be outsourced, shifted to technical commissions, multilateral organisations or third or fourth level bureaucrats. The roles of leaders and political parties cannot be replaced in a democracy. If progressive forces are not capable of presenting new ideas and representing workers and young people, offering advances and hope, we will see, sadly, an increase in the voices that promote fear, intolerance, and xenophobia.

In March, I had the opportunity to talk in Rome with the Italian Prime Minister Matteo Renzi. His courage and skill trying to solve ancient impasses in Italian society was rewarded by the population with voting heavily in favor of the Democratic Party. It is a clear demonstration that it is possible to overcome the scepticism with politics.

We need to create a new historical horizon. Not a new theory, but a new utopia capable of motivating the population and serving as a horizon for progressive forces in Europe.

The world has changed in the last 30 years. But instead of lowering the standards of European workers’ rights against the competition of workers from emerging countries, what is needed is to raise their standards of living to levels similar to those of the Europeans. We need a broader and more generous vision of Europe, facing the fact that it’s possible to achieve the goal of a world without poverty.

30 years ago, when most of South America lived in sombre times with dictatorships spread throughout the continent, the solidarity and support of the European Union and progressive parties were of great help in strengthening the forces of the left and achieving a return to democracy in our region.

Today after great popular and political efforts, our continent is a peaceful and democratic region, with significant advances in economic development and the struggle against poverty made in the last decade.

In South America it was the inclusion of the poorest levels of society that helped propel the economy forward, increasing the income and consumption, creating strong internal markets, that allowed a progressive agenda with the advancement of social and worker rights.

In Brazil, the numbers that best translate the success of that strategy of investing in the poor are the more than 20 million jobs created in the formal sector in the last 11 years, the 36 million people that emerged from extreme poverty and the 42 million people that moved into the middle class.

Seeing the poor as a solution

I am convinced that the solution for the economic crisis worldwide lies in the fight against poverty on a global scale. Social funding should not be seen as simply spending, but rather as an investment in people. We must stop viewing the poor of the world as a problem and start viewing them as a solution, both within countries, and on a broader scale around the world.

Investments in social programs, agricultural production and in financing infrastructure in developing countries, especially in Africa, can create new jobs and a new consumer market. Despite the worldwide economic crisis, African GDP grew consistently at rates of 5% and 6%, making space for the demand for more sophisticated goods and services produced in the wealthy countries and contributing to a sustainable recovery of the economies of Europe and the rest of the world.

The Europe that managed to be reborn after the devastation of the wars of the first half of the 20th century is a proof that it is possible, through politics and democracy, to improve the standard of living of the population.

In South America, a generation of leaders like Dilma Rousseff, Cristina Kirchner, Michelle Bachelet, Pepe Mujica, Rafael Correa and Evo Morales, among others, succeeded, against all kind of conservative, and even reactionary opposition, to reach power by democratic means and promote great social and political advances in their countries.

The contribution of the progressive political forces is crucial to our continents. Therefore, a more direct political dialogue and closer ties are needed between South American and European lefts. It is important not only for our regions, but for the whole world.

This article is co-edited with Queries, the European Progressive Magazine published by FEPS the think tank of the social-democrats at European level