Why are Russian rough diamonds exempt from EU sanctions? 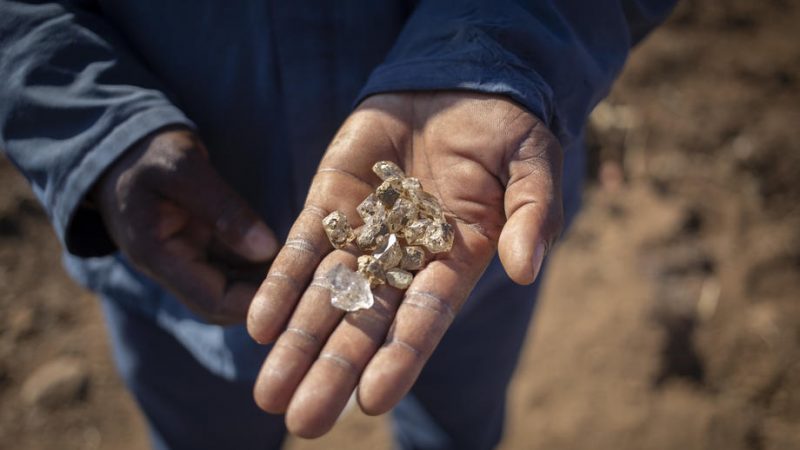 Why, then, has the European import of Russian rough diamonds not been hit by any of the EU trade sanctions adopted since the beginning of the war in Ukraine, asks Larisa Stanciu. [EPA-EFE/Kim Ludbrook]

Russia exports around $4 billion worth of rough diamonds annually, representing one-third of global production. Why, then, has the European import of Russian rough diamonds not been hit by any of the EU trade sanctions adopted since the beginning of the war in Ukraine, asks Larisa Stanciu.

Larisa Stanciu is an advocacy officer for the Justice and Peace Commission.

Four sanction packages have been imposed so far to slam Moscow following Russia’s invasion of Ukraine. These measures cover many sectors and large parts of Russia’s economy. Since March 15, to harm the oligarchs, these sanctions have also prevented the sale of luxury goods such as caviar, certain wines, cigars, and diamonds to Russia. However, when it comes to diamonds, the sanctions only affect the export of diamonds from the EU to Russia, not the immensely more significant imports from Russia to the EU. This is paradoxical as Russia is the biggest diamond producing country in the world. Exporting around USD 4 billion worth of diamonds annually, Russian diamonds represent one-third of global production.

Where do Russian diamonds come from, and who are the main players?

Russian mines are at the heart of the diamond industry. Alrosa mines almost all Russian diamonds, the biggest diamond mining company globally, accountable for over 90% of Russian diamond production. A third of Alrosa’s shareholding is owned by the Russian state, a third by the republic of Yakutia, where many mines are located, and another third by minority shareholders. In 2021, the company produced $4.2 billion worth of diamonds. Alrosa currently has 27 mining operations in Russia, mainly in the Yakutia region, is a 41% shareholder of CATOCA mine in Angola, which is the 4th largest on earth, and is engaged in other exploration activities in Angola, Zimbabwe and the Democratic Republic of Congo.

Russia also has a diamond stockpile held by the Gokhran, a state-owned repository of precious stones, diamonds and metals operating under the Ministry of Finance. Gokhran’s goal is to guard the country’s resources. It undertakes diamond purchases to support the Russian diamond industry and prevent a decrease in diamond prices. The size of Gokhran’s stockpiles is a state secret; therefore, it is impossible to estimate how much revenue the Russian federation could generate by putting this reserve on the market.

Beyond the diamond sector, Alrosa has shares in Russia’s largest iron mine, the Timir mine. It shares those stocks with another company, Evraz, owned until recently by Roman Abramovich, Chelsea football club owner and close friend of Vladimir Putin. He sold his shares recently under international pressure.

The chief executive of Alrosa is Sergei Ivanov, one of the five oligarchs targeted by the first round of US sanctions and one of the key figures in Putin’s inner circle. He is the son of Sergei Borisovich Ivanov, former Russian minister of defence, KGB general and Putin’s chief of staff.

The link between Alrosa and the Russian state is obvious: as Alrosa is a de facto state company, millions in dividends and taxes flow into the Russian treasury every year. For instance, Alrosa earned $840 million in 2021.

As a 33% shareholder, the Russian Federation receives income and access to the foreign currency from Alrosa’s Russian (and Angolan) diamond production, which can directly or indirectly fund Russia’s illegal aggression against Ukraine.

Moreover, with Gokhran, Russia can sell its diamond stock to generate public revenue. This revenue/foreign currency source might become increasingly important for Russia, as the diamond trade is becoming one of the few sectors not affected much by sanctions. So far, only the US has taken measures to restrain the import of Russian diamonds, which hasn’t impacted the diamond trade, given the fragmented and complex nature of the global diamond supply chain.

What role does the Kimberley Process play?

The Kimberley Process (KP) is a certification scheme established in 2003 under UN auspices that, according to their website, aims at “reducing the flow of conflict diamonds”.

“The KP was called into being in the early 2000s to stop diamond-funded rebels from raging wars across Africa”, explains Hans Merket, a researcher at Belgian research centre IPIS and member of the KP Civil Society Coalition. “Its stated mission is to break the link between diamonds and conflict. However, it still looks at conflict through this now 20-year-old lens and only intervenes in civil war contexts where rebels control mining areas”. This explains why the 85 countries participating in the KP have so far not discussed, let alone taken action on, the Russian diamond controversy.

The Kimberley Process Civil Society Coalition (KP CSC), in a press release on March 14, called for a special KP Plenary meeting “to ascertain that diamonds produced in Russia or by Russia’s state-owned diamond miner Alrosa do not contribute to financing conflict”. But such a meeting has so far not been held or planned.

As for the World Diamond Council (WDC), which is the industry’s representative in the Kimberley Process, states that “the situation [in Ukraine] remains complicated as well as dynamic, with changes likely to occur at any time, so it is not possible at this stage to make any meaningful predictions about the potential impact on the diamond sector”.