Why the EU should punish Russian ‘Kremligarchs’ for Ryanair hijacking 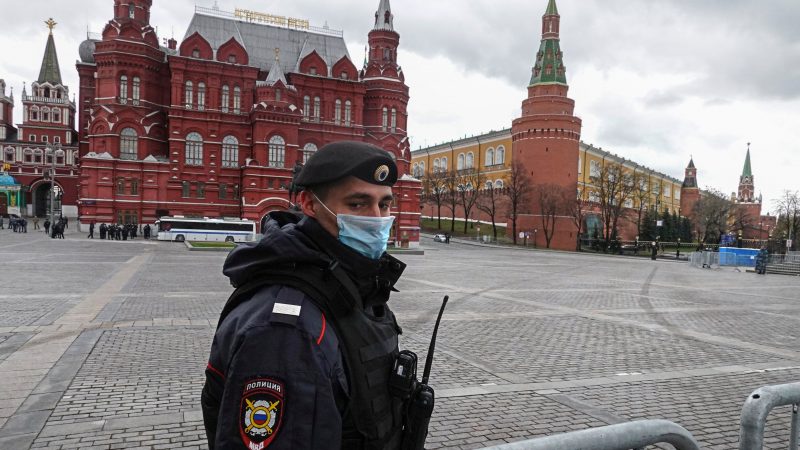 A Russian policeman blocks Red Square and Moscow Kremlin in preparation for a possible opposition rally and prevention of riots in Moscow, Russia, 21 April 2021. [EPA-EFE/MAXIM SHIPENKOV]

While EU sanctions against Belarusian officials are welcome, Russia’s role should not be ignored by Brussels, argues Ilya Zaslavskiy. But targeting Kremlin cronies, rather than the Russian people, would be much fairer and far cheaper than putting an extra NATO brigade in Eastern Europe.

Ilya Zaslavskiy is a Washington D.C.-based anti-corruption activist and researcher. He runs the anti-kleptocracy initiative Underminers.info , and is a senior fellow at Free Russia Foundation. In 2007 while working for TNK-BP in Russia, he was falsely charged with espionage by the FSB as part of a corporate raid organised by oligarchs close to the Kremlin.

While President Aleksandar Lukashenko’s primary role in the extraordinary act of “air piracy” which took place over the skies of Belarus this week is clear, President Vladimir Putin should not escape scrutiny from the West.

The UK Foreign Secretary Dominic Raab told the British Parliament not long after the hijacking that it was “very difficult to believe that this kind of action could have been taken without at least the acquiescence of the authorities in Moscow”.

There is also the matter of the four Russian nationals on the plane. One was the girlfriend of the detained dissident, Roman Protasevich. The other three left the plane at Minsk too, but never returned.

Nobody yet knows who these Russians were. There is speculation that these were Russian agents taking part directly in the operation, a rapidly spreading theory that Russian disinformation efforts are trying to discredit.

At the very least, we know that President Putin approved of the hijacking because his foreign minister, Sergei Lavrov, described the fake bomb scare, forced landing, kidnapping and illegal arrest, as “an absolutely reasonable approach”.

While EU sanctions against Belarussian officials are welcome, Russia’s role should not be ignored by Brussels.

Having studied the Kremlin for nearly two decades, and personally experienced how devious Putin’s agents can be, I believe that a short sharp jab to those closest to Putin would be the most effective way for Brussels to punish him for his support of the Ryanair hijacking and President Lukashenko’s regime.

Putin’s core vulnerability comes in the form of a handful of men economically entirely reliant on the Kremlin and at the same time obedient to it, particularly when acting in Europe, including Belarus. This group is what I have recently labelled “the Kremligarchs.”

These men are often misleadingly portrayed as oligarchs as if they still possessed some measure of economic and political independence from Putin.

In reality, at home, the Kremligarchs are only wealthy with the approval of the Kremlin and globally, including in Belarus, they act on behalf of Putin. At any moment, Russian security services can punish them for disobedience.

At the same time, it is often under-estimated that Putin himself is still dependent on them, both to channel financing to his pet causes, and to secure his grip on power.

In a newly published report, I have identified eight Kremligarchs who should face sanctions.

In each case, you see common patterns: undermining of European democratic institutions and freedom of speech, complex money laundering schemes reliant on European banks, a suspiciously strong interest in politics in the West, an ability to move easily within Western elites, and a cloud of criminal investigations hanging over their activities.

The first is billionaire Dmitry Rybolovlev, a trusted Kremlin intermediary who is under multiple criminal investigations in France, Monaco and Switzerland for attempting to bribe or manipulate judges, police and politicians.

As his career blossomed in Russia throughout the 2000s, Rybolovlev made himself wealthy in great part through his dealings with Lukashenko and accessing Belarus’ vast potash reserves, thereby giving Minsk the crucial flows of hard currency that the regime needed to stay afloat.

In 2008, Lukashenko thanked Rybolovlev’s company, Uralkali, for helping with exports by granting it additional tax favours. The Belarusian president was reportedly especially grateful to Rybolovlev for providing him with US dollars for exports at the time when the US had placed wide-ranging sanctions against the dictator.

Around the time that Rybolovlev was wooing Lukashenko, another Russian magnate, Mikhail Gutseriev, and his patron, German Gref, were also helping Putin prop up the regime. They still are.

A year ago, Gutseriev’s Russneft oil company became the sole supplier of crude to Belarus. He has also set up a second large potash exporting business that, like Rybolovlev, provides invaluable hard currency to Lukashenko’s depressed economy.

Russia cannot escape their complicity in the Ryanair hijacking. The question is how exactly to punish the Kremlin. The Biden administration has already explored sanctions targeting disinformation agents, intelligence officers and sovereign debt. Yet the kremligarchs should not be ignored.

Angry Kremligarchs who have lost access to their foreign assets and bank accounts, banging on Putin’s door and demanding answers, are an essential tool. It would be both fairer – targeting Kremlin cronies and not the Russian people – and far cheaper – than putting an extra NATO brigade in eastern Europe.

The Ryanair hijacking shows that even under pressure from existing sanctions, Putin is prone to supporting erratic and dangerous behaviour. Sanctioning more Kremligarchs, who are both his greatest enablers and his greatest weakness, would be an appropriate response to keep him in check.