Will the EU be a pawn in the pro-Israel incitement game? 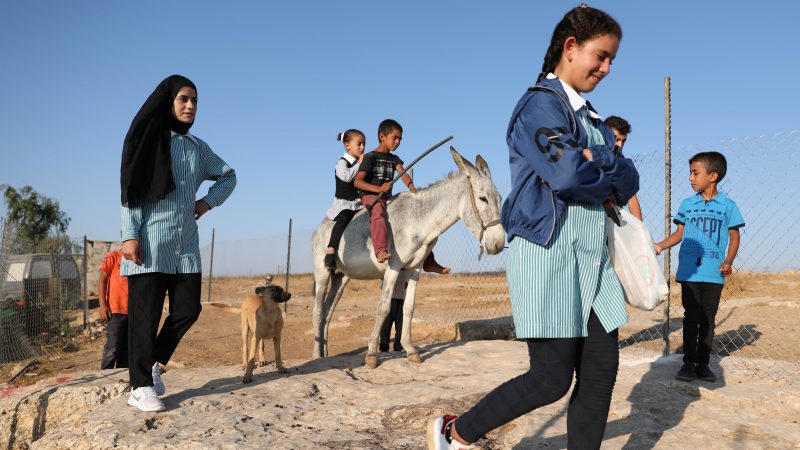 Palestinian children head to school on the first day of the new academic year, in Sosia village, near the West Bank village of Yatta, south of Hebron, 16 August 2021. [EPA-EFE/ABED AL HASHLAMOUN]

Dahlia Scheindlin is a political scientist and a public opinion researcher with over 20 years of experience analysing the Israeli-Palestinian conflict and political dynamics in the region. She holds a PhD from Tel Aviv University and has conducted research and political advising in 15 other countries, including post-conflict and transitional democracies.

In recent months, the European Commission and Parliament have devoted significant attention to the question of whether Palestinian textbooks incite children to hate Israel. Since the publication in June of an EU-funded study of the Palestinian curriculum by the Georg Eckert Institute (GEI) in Germany, Brussels has sought to incorporate this topic into the urgent goal of Israeli-Palestinian conflict resolution.

But too often, the textbook issue is exploited to avoid, rather than advance peace – and the European institutions are in grave danger of abetting that process.

Israelis and Palestinians are, in addition to decades of daily violence on the ground, locked in a devastating psychological battle of mutual hostility. Each side deeply mistrusts the other, and each believes that the other teaches hatred from the youngest ages.

Although the accusation is identical among both communities, Israelis and pro-Israel activists around the world have taken a vocal lead: they have accused Palestinians of inciting children against Israel, Jews, and Zionism, through schoolbooks. These accusations have been made for years and in all possible forums, both domestic and international. They have become among the most enduring and ubiquitous arguments for Israelis for why peace is impossible.

Hardline Israeli and pro-Israel forces have, in fact, made the Palestinian textbook issue a prime tool for avoiding rather than promoting peace. This approach represents a callous dismissal of the actual need to socialise all children for peace. Unfortunately, these are the arguments that have come to dominate the debate in Brussels as well.

Yet, systematic studies of those textbooks, including the GEI report and earlier studies, fail to uphold the extreme version of the Palestinian intolerant pedagogical environment that Israel asserts.

Nevertheless, after living under military occupation for over 50 years and ongoing violence, there are critical perspectives on Israel and assertions of Palestinian national identity – and room for improvement. As a follow-up to the GEI findings, the Commission agreed to step up its engagement on the issue.

But to truly advance peace through education, the EU bodies must distinguish between cheap manipulation designed to justify Israel’s ongoing occupation and authentic striving for improvement.

The former is easy to spot, especially the flat mantra “Palestinian textbooks incite to hatred and violence against Jews and Israel.” The one-sidedness is a dead giveaway, and sloganeering has no place in serious policy discussions.

To address the issue seriously, the following perspectives should guide any peace-oriented discussion of textbooks:

First, is the discussion one-sided? Any examination of Palestinian textbooks without a corresponding analysis of how Israeli children are taught and socialised is pointless.

As education writer Gil Gertel observed, even Israel’s current education minister from a right-of-centre party conducted her doctoral research on peace and conflict education among Palestinians and Israelis.

The notion that one side socialises its children to war and the other side to peace is factually wrong and should be permanently dismissed. Daniel Bar-Tal of Tel Aviv University, Israel’s leading social psychology expert on the Israeli Palestinian conflict, has documented exhaustively how Israelis are socialised into militarism, exclusive national claims, and delegitimisation of Palestinian national claims or even history, from the youngest ages.

Common sense should tell us that a study focusing on only one side effectively places blame on one side – not the message that any outside observer, or potential negotiation facilitator, should wish to send. Practically, the fallacy that only Palestinians miseducate their children can only lead to failed policy conclusions – and a serious waste of resources.

A second guideline for determining whether various interested parties are raising the textbook question out of a commitment to peace or avoidance is whether the studies are used to support or reject change.

In 2013, a US government-funded study conducted one of the most comprehensive and systematic reviews of both sides’ education curriculum. The finding that outright violent incitement and extremism among Palestinians was far less widespread than generally assumed should have been cause for optimism and positive reinforcement.

Instead, the Israeli government panicked at the loss of its core argument against Palestinian textbooks for all ills of the region and rejected the study. What can possibly be bad about learning that Palestinian schools do not educate towards hate? Only if the finding erodes a “pro-Israel” pillar that they teach hate, therefore Israel cannot end occupation.

Finally, policymakers should realise that manipulation of the textbook issue is becoming as much of a problem as bad curricula. The very notion of exclusive Palestinian incitement rests on deliberate confusion between cause and effect: blaming textbooks for causing the conflict rather than reflecting life as Palestinians experience it.

It is cold reality that fuels representations in textbooks, not the other way around. Changing that reality is the most effective and efficient means to change how people teach about those experiences.

As Israeli professor, Ishai Rozen-Zvi put it, if Israeli forces uprooted 14,000 dunams (slightly less than 3,460 acres) of agriculture in Gaza alone between 2014-2018, “What do you think: a Palestinian child who doesn’t see that in textbooks but with his own eyes, will have a more positive picture of Israel?”

On the Israeli nightly news, I watch the weather report. I cannot recall the last time the Green Line, separating the occupied Palestinian territory from Israel, appeared on the weather maps or anywhere else in everyday Israeli life.

Only when the COVID crisis struck in March 2020, magically, after years or even decades, the Palestinian territory appeared on the Israeli news demarcated by the Green Line – presumably to remind Israel of where the danger of infection was located or where Israel need not take responsibility for vaccines.

Anyone living in the region knows the truth: Both sides are socialising children and adults alike in exclusivist terms, and both sides need to improve education. Such changes will support future peace, but they will not change reality. For that, there must be a change of policy and an end to occupation; those measures will be far more effective than Israeli propagandists blaming the other side’s textbooks. EU policymakers cannot allow themselves to be pawns in a cynical, dangerous game of deflection.