Europe’s leaders must fill the void left by Donald Trump and take a tough stance against the Saudi government, writes Nicolas Tenzer.

Nicolas Tenzer is the chairman of the Paris-based Centre for Study and Research for Political Decision (CERAP).

Donald Trump’s decision to overrule the CIA’s conclusions and reject further punitive measures against the Saudi government over the assassination of Jamal Khashoggi may be in line with the American president’s transactional view of international relations.

Nonetheless, the White House statement spelling out his commitment to “remain a steadfast partner of Saudi Arabia” may have squandered a critical opportunity, if not an obligation, to force a course correction in the destabilizing behaviour of one of Europe’s most critical regional partners.

Ironically, the Trump administration’s statement succinctly outlined each of the strategic Western interests Saudi Arabia’s crown prince Mohammad bin Salman (MBS) has undermined, all while absolving him of responsibility. 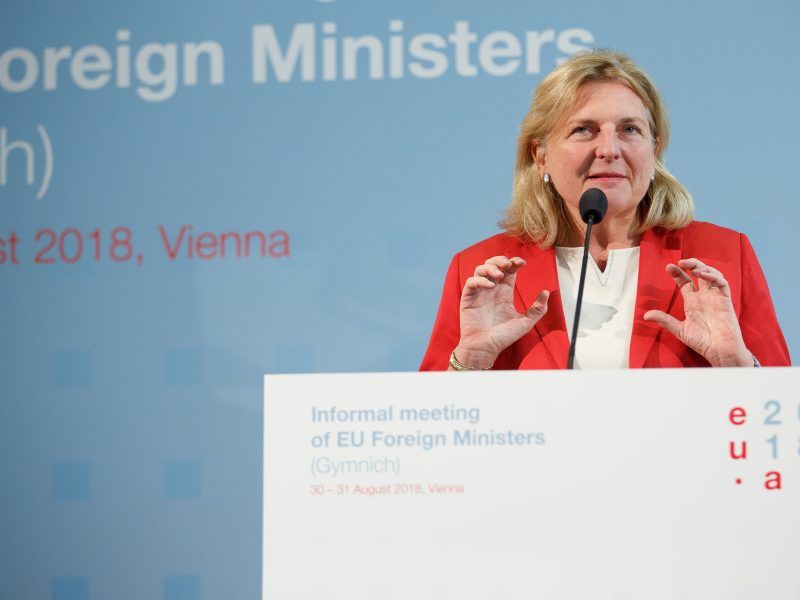 Pillar of stability or agent of chaos?

Trump makes clear that his overriding policy imperative is to work with the Saudis to counter Iran, but the breakdown of the Gulf Cooperation Council (GCC) and the diplomatic crisis between Saudi Arabia and Qatar, orchestrated by the crown prince, has been an inexplicable strategic gift to Tehran. Instead of securing Qatari compliance for his regional policy aims, MBS has instead forced Qatar towards Iran, Erdogan’s Turkey, and even Russia.

It is in both in the United States’ and Europe’s best interests to see the success of the Council, both as a vehicle for the Gulf monarchies to moderate each other and as a counterweight to check the regional machinations of Iran and jihadist groups.

The Gulf crisis has instead fatally undermined the institution and robbed the region of an important force for stability. Emmanuel Macron has tried to mediate between the two sides since last year, and Trump’s own government has renewed its push for the Saudis to end the crisis. MBS refuses to budge.

Both American and European officials are finally coming to terms with the dangerous inconsistencies of the prince’s foreign policy. Leaders in Paris, London, Brussels, Berlin, and Washington are being forced to admit that Saudi Arabia’s use of Western arms to bomb civilians in Yemen and implement a policy of starvation, above and beyond its indignity, does nothing to secure stability in the region. Pressure for an embargo on weapons deliveries to Saudi Arabia has grown exponentially.

Both the United States and France have finally demanded the Saudis put an end to the hostilities in Yemen, but a temporary ceasefire in the Al Hudaydah port, a crucial supply point for food and medical aid, has already broken down. Peace talks are now scheduled for next month in Sweden. If the Syrian experience is any indication, those talks will do little to alleviate the humanitarian crisis.

Previous revelations of MBS’ cold-blooded attitude towards the mass murder of the Syrian people perpetrated by Bashar al-Assad, his statement in April that he no longer sees any obstacles to the Assad regime’s staying in power, and his flirtations with Moscow raised red flags which should have attracted greater focus at the time.

Riyadh’s shockingly short-sighted about-face on Syria, emulated by other Gulf monarchies as well as by Israeli prime minister Benjamin Netanyahu, constitutes a triple threat: to long-term peace in Syria, which requires the departure of Assad, to the credibility of Western principles, and to stability in the region, which requires democratic transitions as opposed to authoritarian retrenchment.

The Saudi commitment to maintaining supposedly stable autocratic regimes, with the view of undoing the “Arab Spring”, predates MBS but still constitutes a direct threat to European security. Brittle Arab authoritarianism only fosters the growth of radical terrorist groups.

It also inevitably sets up the types of catastrophic state breakdowns we have seen in Syria and Yemen. When those collapses occur, Europe will once again be forced to deal with the humanitarian fallout.

Saudi Arabia’s own retrenchment has also become readily apparent. Many outside observers suggested the “Vision 2030” plans put forward by the crown prince marked a “liberal turning point” for the kingdom – an illusion I previously cautioned against. As late as April, Emmanuel Macron was still singing the Saudi heir’s praises and working to deepen the strategic partnership in Paris.

These hopes of a “reformed” Saudi Arabia have been all but crushed over the past two months. It took one “horrible crime”, to use Trump’s words, for us to take notice not only of Saudi war crimes in Yemen but also Mohammad bin Salman’s crackdown on dissidents – including the imprisonment of blogger Raif Badawi and other human rights activists for six years, not to mention the torture of women’s rights advocates.

Europe needs to take the lead

While America sends mixed signals, the European capitals must understand the harsh but simple reality of the current state of affairs: Saudi Arabia may not constitute the same major threat of destabilization to the region as Iran, but the kingdom’s erratic foreign policy is undoing any good that comes from our alliance with Riyadh.

France and its European partners must be direct with Saudi Arabia with regards to questions of basic human rights and regional stability. The GCC crisis, for one, must be brought to a swift conclusion.

Saudi must also agree to take a seat at the negotiating table on Yemen in Sweden, accepting not only that the war cannot be won, but that its intervention serves only to strengthen terrorist groups like Al-Qaeda while pushing the Houthis – themselves guilty of war crimes – into Iran’s arms.

The kingdom must also recognise that its self-destructive rapprochement with Bashar al-Assad’s regime also strengthens Iran, while its repressive domestic policies undermine the confidence of the foreign investors it has so doggedly pursued.

These demands are not utopian. They reflect the hard truth that a consistent Western stance on Riyadh, Yemen, and other regional questions is vital to our shared security. Saudi Arabia could be a major force for peace and security in the region, but at the moment, its policies are having the opposite effect.