“A few bullets stopped in my knee, but my colleagues were shot in the chest. They died,” the Iraqi teen told us.

Hassan’s father – a policeman – was killed in action. He reached Timisoara hidden in a truck. Now a ninth grade student in Giurgiu, he goes to school on crutches because terrorists crushed his knee with their machine guns in Iraq. He no longer has a family, except for his big brother. The rest—his father, his mother, another brother and their sister—died in bomb blasts. When his knee was broken, in a terrorist assault, two of his friends died near him.

“One day in 2013, I went with my colleagues to the city centre. A bomb exploded close to us and we wanted to get inside to see who was hurt or died. At that moment, a car with a machine gun appeared and shot everyone. Two of my colleagues got down, but I was standing. Several bullets entered my knee, but they were shot in the chest. They died,” recalls Hassan.

A few ladies in Bucharest and Giurgiu helped him go to school, bought him some clothes and took care of him. Hassan is an ambitious youngster. He knows he lost everything but he wants to build a family, go to barber school, and get his knee repaired so that he could get rid of the crutches. And his plans are connected to Romania because he wants to remain here. 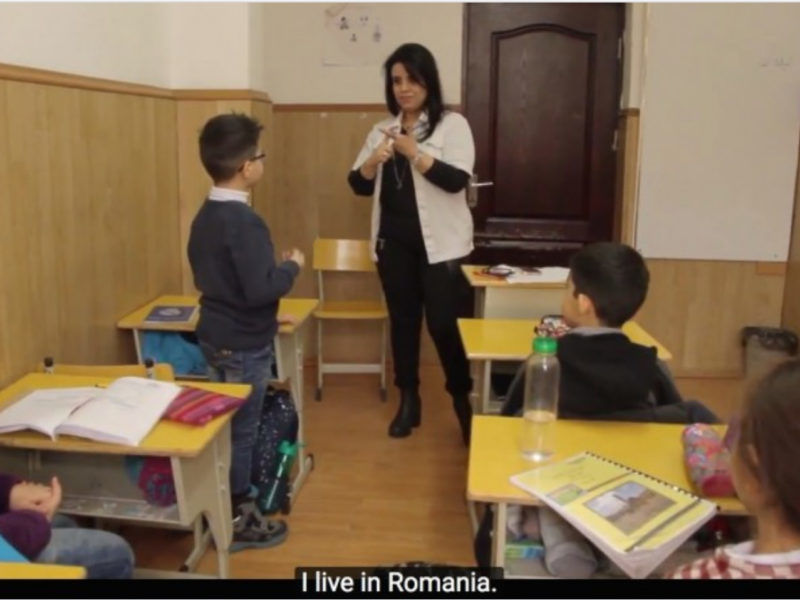 School has proven to be very difficult for Hassan, as he does not know Romanian very well. He learns it, he can make himself understood when talking, but he has big troubles in the Latin course. Hassan is repeating the ninth grade, but he has not given up and continues to go to classes with his Romanian colleagues.

“For him, it is very important how good he understands Romanian, how much he understands from what is taught in the class. From what I’ve heard, by now he speaks Romanian well. Very well,” Cristina Anghel, the principal of the Tudor Vianu High School in Giurgiu, tells us.

Hassan started school in Romania as an unattached student. He took classes, but wasn’t given grades. It was training for when he would be officially registered as a student. At the end, he took a test. What would have been commonplace for a Romanian student was very hard for Hassan. He had to write in Romanian and left-to-right writing was new to him.

“After this test, he could be enlisted in the ninth grade. We do not know what his level in maths in his country was, but he has some basic information,” says the head of the high school.

Hassan’s classmates did not hesitate when it came to raising money for Hassan’s leg surgery.

“His integration was quick, children socialise very rapidly. Maybe it was also the oddity of having a refugee among them. His medical issue made the other students aware and they organised a fundraiser to help him with the surgery because the required amount is quite large. They [made a big effort], not only in school but also in town, going to institutions, even to Vodafone. It is a commendable gesture for some ninth grade kids,” Cristina Anghel says.

Now, Hassan is thinking he needs money again, for his second surgery, which he hopes will also be the last. He hopes he will be able to walk normally, like everyone else.