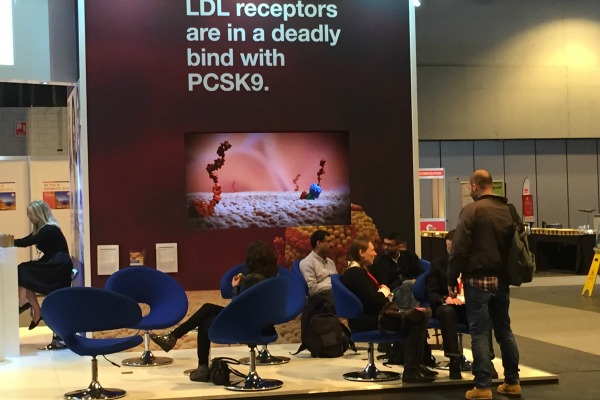 SPECIAL REPORT / Some diseases related to cholesterol are more prevalent than previously thought. Therefore, politicians have to recognise that they should be allocating more money for research and screening, says Dr. Robert Cramb.

Dr. Robert Cramb is a consultant chemical pathologist at Queen Elizabeth Hospital in Birmingham. He spoke with EURACTIV’s Henriette Jacobsen and Evan Lamos at the European Atherosclerosis Society’s (EAS) conference in Glasgow

What is the EAS conference in Glasgow about, and why is it an important health conference?

Which diseases are you particularly focusing on at this conference?

We are particularly focusing on Familial Hypercholesterolaemia (FH) at the conference. There has already been an initiative to get all the partnerships of the areas of the European Union and throughout the world to come together to look at FH. We are also looking at a number of ways in which we can treat diseases. Some of the newer drugs called PCSK9 are moving forward. They will probably be introduced into drug therapy over the next couple of years, when they have been through clinical trials and through the review of the European Medicines Agency (EMA).

Why is it important to focus on FH right now?

FH is a disease which we previously thought affected 1 in 500 of a population. It’s important, because it affects people from the age of 15, and 50% of men or women can be affected by the disease. The effect which occurs can be as devastating as a sudden death in the early 20s.

In the Netherlands, there has been a very strong case to screen people with FH. Far from being a disease for 1 in 500 of the population, it is (closer) to 1 in 250 in a population. So it’s much more common than we previously recognised. What’s more, we are also seeing that ‘double genes’ affect people and that makes the disease even worse. That makes it one of the most common heritable diseases in the world.

Has it been an overlooked disease? Is more screening what you are calling for?

It’s certainly a disease which people have largely ignored over the past 20 years. There’s an understanding now that statin drugs clearly prevent heart disease. Moreover, we have data on statin drugs in patients with FH and in the UK, for instance, (and) we have guidelines for screening for FH.

In the UK, in each of the constituencies, we have different ways of doing it. In Scotland, Northern Ireland and in Wales, there are mature screening programmes. In England, there are only a few areas where this is occurring. It’s really unfortunate and part of that is due to the funding. Yet, when you look at the funding issues, actually it’s more cost-effective to screen the population than it is to leave it alone.

Politicians do have to recognise that they should be putting money up to it. Some of the organisations, such as HeartUK, a cholesterol charity, has been lobbying parliament over the last few years to try to do that.

Since FH is related to genes, can you say something about where it’s most prevalent in Europe?

What seems to be quite clear is that throughout the EU, you are actually looking at the same amount of disease, irrespectively of where you are. Of course there are some differences. But I would still stick to the point that the prevalence is going to be closer to 1 in 250 across Europe.

What would you like an EU politician, such as an MEP or a Commissioner, to do to help FH patients?

I really think the effort has to be across countries. We ought to be pushing the same message that the statin therapies that we have are very good for the vast majority of patients and we should be trying to encourage screenings, Europe-wide.

If we initiated a screening programme that went across, then we would be able to trace populations properly and initiate therapies properly. Those therapies could be more adequately targeted, and we could review them to make sure that they are appropriate for the population.