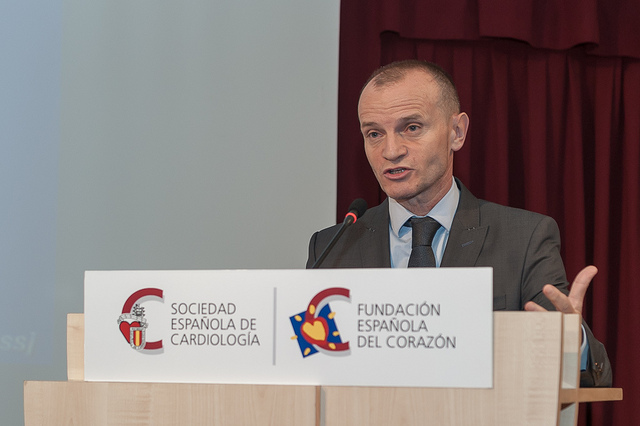 José Ramón González Juanatey, president of the Spanish Society for Cardiology [photo provided by the SEC]

EU member states should do more to regulate the amount of salt and fat in food products to prevent cardiovascular disease, says José Ramón González Juanatey.

It is perfectly possible to prevent cardiovascular disease. The percentage of prevention is similar to infectious diseases. We can curb this trend in two ways: with education during early childhood and with more action from governments. Governments in the EU should regulate more, for example, on the amount of salt or fat permitted in some types of food. Governments should put in place effective prevention policies.

Unfortunately, due to the financial crisis this is not so easy to do in some European countries. But prevention is essential. In this framework, the World Heart Federation (WHF) has recently launched an initiative to reduce premature cardiovascular disease deaths by 25% by 2025. It is a realistic target. We can achieve that goal.

Some EU countries have already introduced, while others are considering, a specific tax on sugar, salt or fat. Do you think this can help?

It is not easy to change your eating habits. It is extremely difficult to modify your diet, from meat and fat to fish and vegetables, in particular when you get older. This is why emphasis must be put in education during early childhood (3-8 years old). Unfortunately adults only change when they suffer a serious cardiovascular event, when they have already a problem, and when sometimes it is already too late to repair the damage. Anyway, there is also an optimistic message: Changing eating habits is not impossible.

What should be the top priorities to prevent cardiovascular disease?

Well, as I have said before, education is a key factor, but also, I don’t want to hide it, sometimes it is necessary to implement what I would describe as ‘deterrent measures’. Existing anti-smoking laws in public spaces must be respected. It would be very important to have a better food labelling, to know, for example, the exact amount of salt of fat in many products. I would even go beyond that: In my view, the offer of ‘junk food’ is too broad, there are (in Spain, for example), too many salty products available to the public. Are you free to decide what you want? Yes, but for the good sake of public health, the offer of “junk food” should be restricted.

In a few words: you’re a suggesting to limit consumer’s freedom to decide?

I don’t see it that way. What we should in any case avoid are messages like: why do they want to limit my freedom to decide what to eat? Who they think they are to tell me the amount of salt I should eat or if I should or should not smoke? The answer to this question is simply: because if you get ill, your treatment will be financed with taxpayer’s money in a public hospital. Citizens have the freedom to decide, but they shouldn’t abuse of the freedom they have.