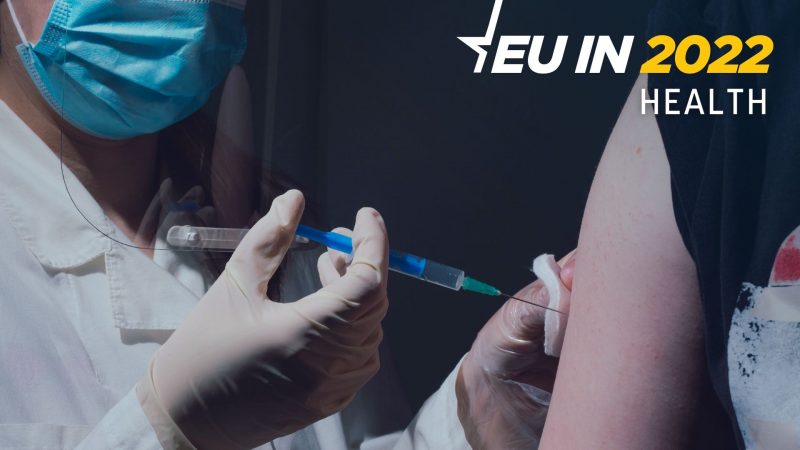 The EU's health agenda is busier than ever in 2022, from fighting the pandemic to building the European Health Union. [Shutterstock / Haris Mm]

Over the last two years, COVID-19 has brought many changes to Europeans’ lives but also to the EU’s agenda, making sure that the renewed focus on health is here to stay in 2022.

From building the European Health Union to fighting antimicrobial resistance – it’s all on 2022’s political table. All eyes are on the newest, highly transmissible COVID-19 virus variant Omicron, which made world leaders rethink sanitary measures and showed that vaccination alone would not do the trick.

It is also a reminder of the importance of getting vaccinated to avoid mutations. “No one is safe until everyone is safe” – the famous slogan is proving itself right once again.

But despite knowing that the longer virus circulates, the more mutations we can expect, only 8% of people in low-income countries have received at least one dose. In comparison, in the EU, this figure is nine times higher at 73%.

To solve the issue, South Africa and India proposed suspending intellectual property rights for COVID-19 treatments and vaccines to the World Trade Organisation in October 2020, arguing that it could speed up vaccine access in poorer countries.

The TRIPS waiver should have been discussed at the WTO ministerial conference at the end of last November but was postponed due to the spread of the new COVID variant. Perhaps 2022 could be the year to finally end the ongoing discussion, but there are concerns that without “know-how” and technology transfer, an IP waiver will not solve the issues.

In the meantime, for those who are reluctant to get the shot in the EU, the first protein-based vaccine, Novavax, was approved just before the winter holidays.

Protein-based is a “much more traditional” vaccine platform, as Adam Finn of the European Technical Advisory Group of Experts on Immunisation (ETAGE) and chair of paediatrics at the University of Bristol, told EURACTIV.

It is hoped that this well-established technology, which has been around for nearly 30 years, will encourage more people to get the jab.

Protein-based vaccines have another advantage – they can be transported at higher temperatures than mRNA vaccines, reducing their cost while increasing accessibility.

But while vaccines play a crucial role in the fight against COVID-19, therapeutics are needed to limit the need for hospitalisation, speed up recovery times, reduce mortality, and alleviate long COVID.

The European Commission’s strategy on COVID-19 therapeutics adopted in May 2021 covers the full life cycle of medicines from research, development, selection of promising candidates, fast regulatory approval, manufacturing, deployment, and final use.

Six therapeutics are now authorised for use in the EU. Two companies submitted marketing authorisation applications and two more are currently under rolling review.

But of course, the health agenda is not all about COVID.

The much-awaited initiative to overhaul the current EU legislation on medicines is due to be presented at the very end of 2022, according to the Commission’s draft working programme.

As highlighted in its pharmaceutical strategy presented in 2020, the Commission wants to put in place a new system of pharmaceutical incentives to stimulate innovation in areas of unmet medical needs, such as neurodegenerative and rare diseases and pediatric cancer.

An example of unmet medical needs mentioned in the document is antimicrobial resistance (AMR), which decreases doctors’ ability to treat infectious diseases and perform routine surgery.

There are important developments ahead for in vitro diagnostic medical devices, which are tests used on biological samples to determine the status of a person’s health.

The new In Vitro Diagnostic Medical Device Regulation (IVD Regulation) is planned to apply from 26 May 2022 but the Commission has recently recommended “a progressive roll-out.”

“We are suggesting a gradual approach with more or less one class kicking in every year,”  Anna Eva Ampelas, head of the unit of medical devices and health technology assessment at the Commission’s DG SANTE, told MEPs in the European Parliament’s health committee on 27 October.

Another key point of the 2022 policy agenda will be the proposal to update recommendations to member states on cancer screening, which is currently limited to breast, colorectal, and cervical cancer.

A long-awaited legislative proposal for setting up a health data space is also expected to be adopted in 2022.

With the health data space proposal, the EU executive will try to simplify the exchange of and access to health data for different use cases, including healthcare provisions, digital health services, and research.

France will be running the EU presidency in the first half of 2022 and President Emmanuel Macron announced three challenges in health when presenting the presidency’s priorities.

Starting with EU-Africa relationships, Macron said he would stress the role of Europe as “a pioneer” to help Africa, where only 6% of the population is vaccinated. Macron wants to set up “a real health agenda that consists of deploying much faster and much stronger structures for producing vaccines and a primary health system”.

Macron also wants to reinforce the local production of medicines and medical supplies, such as masks or respirators, in the EU, which is in line with his vision of Europe’s strategic autonomy. “This French presidency must be the opportunity to imagine a new European model which is a model of production, but also of solidarity and regulation,“ he said.

The final priority in the health sector is developing digital health.

Macron expects the French presidency “to succeed in obtaining European funding for our most innovative start-ups and digital players, by mobilising our institutional investors.“ He also mentioned that a “real joint research agency and major research plans, for example on Alzheimer’s“ should be on the agenda.