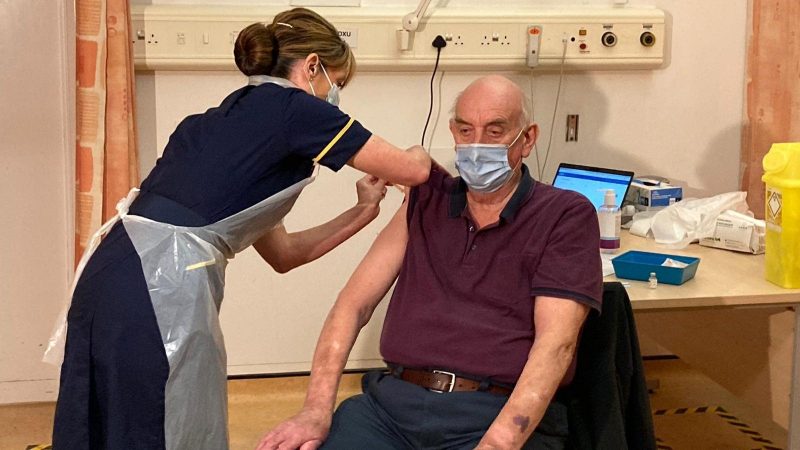 Brian Pinker, an 82-year-old retired maintenance manager, was the first in the UK to receive the AstraZeneca jab, at Oxford's Churchill Hospital on 4 January 2020. [NHS England Twitter account]

Even as the UK’s second vaccine rollout of 530,000 doses began, Scotland’s devolved government said the nation would impose a lockdown on its more than five million people for the rest of January.

Confronted with a severe wave of infections that has threatened to overwhelm the public health system, Prime Minister Boris Johnson’s Downing Street office said he would announce new restrictions for England later Monday “to arrest this rise”.

“The vaccine means everything to me. To my mind it’s the only way of getting back to a bit of normal life,” said Brian Pinker, an 82-year-old retired maintenance manager who Britain’s NHS said was the first to receive the AstraZeneca jab at Oxford’s Churchill Hospital.

'I'm so pleased to be getting the COVID vaccine today and really proud it is one that was invented in Oxford.'

82-year-old Brian Pinker became the first person in the world to receive the new Oxford AstraZeneca vaccine this morning at @OUHospitals. 💉 pic.twitter.com/nhnd3Sx97m

Across the English Channel, the European Medicines Agency said it could approve an inoculation from US firm Moderna as soon as Monday, under pressure from EU member nations frustrated by slow progress in the bloc while other advanced countries race ahead.

Where Britain, the US and Israel have all given more than a million people their first shot, the figure is just 200,000 in Germany and a few hundred in France.

But the regulator said the jab from the University of Oxford and AstraZeneca was unlikely to secure European approval in January.

High hopes have been placed in the Oxford-AstraZeneca vaccine, which does not have to be stored at the ultra-low temperatures required by Pfizer-BioNTech and Moderna alternatives.

That could mean greater access for less wealthy parts of the world in the fight against the coronavirus, which has infected nearly 85 million people with more than 1.8 million known deaths.

With 75,000 lives claimed by the virus in Britain so far, Johnson said in a BBC interview he hopes to get shots to tens of millions in the next three months.

In Beijing, thousands lined up for vaccination as Chinese authorities raced to inoculate millions ahead of the Lunar New Year mass travel season in February.

China has already administered around 4.5 million doses of largely unproven emergency vaccines this year — mostly to health workers and other state employees destined for overseas jobs, according to authorities.

Elsewhere, American officials on Sunday rejected claims by outgoing President Donald Trump that the country’s death toll of more than 350,000 was exaggerated, as they defended the stumbling rollout of vaccines in the world’s worst-hit nation.

The United States has a known caseload of more than 20 million, and the Trump administration has faced intense criticism for its handling of the pandemic, which has hammered the US economy.

The 4.2 million people vaccinated so far with the Pfizer and Moderna shots are far below the official predictions of 20 million by the new year.

More than 13 million vaccine doses have been distributed nationwide, but efforts to inoculate health workers and vulnerable people have been hampered by logistical problems and overstretched hospitals and clinics.

“There have been a couple of glitches, that’s understandable,” top US expert Anthony Fauci said, adding it was a challenge “trying to get a massive vaccine program started and getting off on the right foot.”

Troubling reports have emerged of vaccines going bad due to poor organisation, lack of healthcare professionals to administer them or, in one isolated case, sabotage.

Moncef Slaoui, chief advisor to the US government’s military-led vaccine effort, said another alternative was being explored for the Moderna vaccine: administering half doses twice.

“We know it induces identical immune response,” Slaoui said, adding that officials are in discussions with Moderna and the Food and Drug Administration (FDA) about the proposal.

India, with the world’s second-largest number of known cases, approved the emergency use of two Covid-19 vaccines on Sunday, paving the way for one of the world’s biggest inoculation drives.

The South Asian giant has set an ambitious target of inoculating 300 million of its 1.3 billion people by mid-2021, and it gave the green light to the AstraZeneca vaccine as well as one developed by local pharmaceutical firm Bharat Biotech.

But Indian authorities, like many across the world, must overcome public skepticism about the vaccine, often promoted by social media campaigns and conspiracy theories that offer no credible evidence.

A recent survey of 18,000 people across India found that 69% were in no rush to get vaccinated.