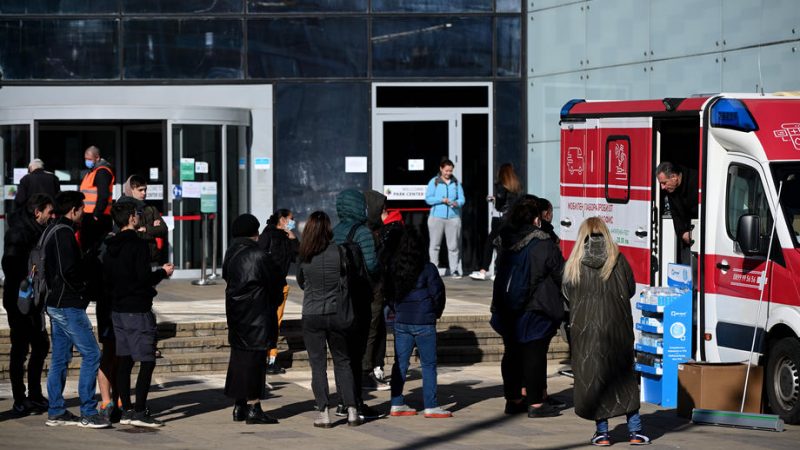 People wait for an antigen COVID-19 test at mobile laboratory in front of shopping center in Sofia, Bulgaria, 25 October 2021. The Bulgarian government is drastically introducing restrictive measures in an attempt to stop another wave of coronavirus infection. Health services are introducing the European Green Certificate as mandatory for most indoor activities. [EPA-EFE/VASSIL DONEV]

Bulgaria’s tally of coronavirus infections has risen by 6,813 in the past 24 hours, a record daily increase as the European Union’s least vaccinated country grapples with a fourth wave of the pandemic, official data showed on Wednesday (27 October).

The virus has killed 124 people in the past 24 hours, according to the figures, bringing the total death toll to 23,440. The day before the number of Covid deaths was 243, an absolute record for the 7-million country.

More than 7,300 people were in COVID-19 wards as hospitals across the Balkan country struggled to deal with the inflow of coronavirus patients amid a shortage of medical staff.

The interim government imposed a health pass entry to most indoor public venues in a bid to slow the spread of the more contagious Delta variant and spur vaccinations in the country, where only one in four adults has had at least one shot.

Vaccine take-ups have quadrupled since the pass was made mandatory last Thursday. More than 26,000 new doses were administered in the past 24 hours, bringing the total number of vaccinated adults to 1.46 million people.

But many Bulgarians remain sceptical about the shots amid entrenched mistrust in state institutions, misinformation and contradictory messages by politicians and experts ahead of elections this year on 14 November.

Vaccine opponents have held rallies against the health pass over the past days and a new national protest, organised by restaurants and hotel owners, is planned for Thursday.

Late on Tuesday, interim Health Minister Stoicho Katsarov said the situation at hospitals was critical and appealed to Bulgarians to observe the restrictions. Out of 700 intensive care beds across the country, 608 are occupied.

“If these measures do not work, the only option left will be a full lockdown and a halt of economic life,” Katsarov said.