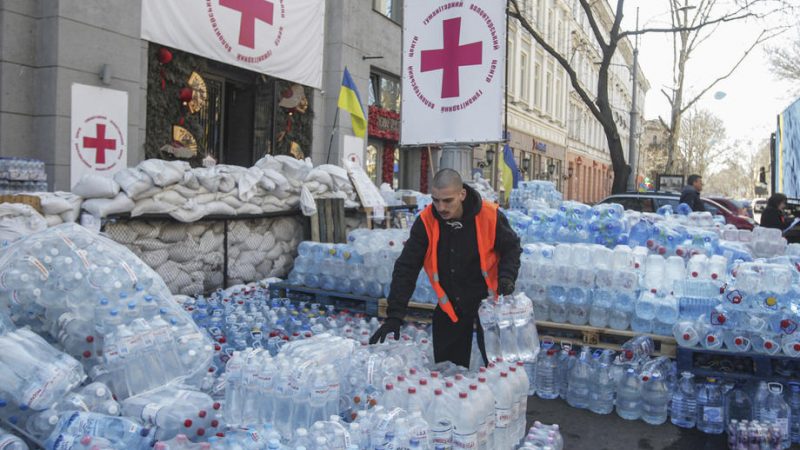 Ukrainian volunteers collect water for inhabitants of the city of Mykolaiv in the Humanitarian Volunteer Center in Odesa, Ukraine, 19 April 2022. For a week, the Ukrainian city of Mykolaiv is experiencing serious problems with their water supply due to a main water conduit being damaged during the fighting in the Kherson region. [EPA-EFE/STEPAN FRANKO]

“We are concerned about the potential cholera outbreak in occupied areas where water and sanitation infrastructure is damaged or destroyed,” Hans Kluge, WHO Regional Director for Europe, said during a press briefing from Kyiv.

Cholera is an acute diarrhoeal infection caused by ingestion of food or water contaminated with the bacterium Vibrio cholerae. Disruption of water and sanitation systems can increase the risk of cholera transmission, as it is closely linked to access to clean water and sanitation facilities.

WHO Ukraine Incident Manager Dorit Nitzan said the WHO’s partners on the ground in Mariupol are reporting “actual swamps in the streets”.

“Sewage water and drinking water are getting mixed. This is a huge hazard for many infections, including cholera,” she said.

Cholera cases were already reported in the city of Mariupol back in 2011.

It takes between 12 hours and five days for a person to show symptoms after ingesting contaminated food or water. Untreated, it can be deadly, but with early and proper treatment, the case fatality rate should remain below 1%.

Rapid access to treatment, such as oral rehydration and intravenous fluids, is essential during a cholera outbreak, the WHO stated. For prevention, the WHO is already prepositioning cholera vaccines in its hub in Dnipro, a city on the Dnieper River in central Ukraine.

“We are getting ready with the cholera kits with the vaccines, and working closely with the NGOs, our implementing partners that are able to go into Mariupol to support the people,” Nitzan said.

Currently, there are three WHO pre-qualified oral cholera vaccines that all require two doses for full protection.

For those who need healthcare, accessing it remains a challenge. The WHO verified 226 attacks on healthcare in Ukraine as of Tuesday.

“That is almost three attacks per day since 24 February,” Kluge said. At least 75 people died and 59 were injured during those attacks, which include primary health care facilities, hospitals and ambulances.

Worldwide, two-thirds of all attacks on health care this year, verified by WHO, happened in Ukraine.

The impact of attacks on healthcare in Ukraine could result in health services loss for a quarter of a million patients a month, the WHO representative to Ukraine, Jarno Habicht, estimated.

Kluge highlighted that attacks are unjustifiable and must be investigated and stressed that  “no health professional should have to deliver health care on a knife-edge”.

“But this is just what nurses, doctors, ambulance drivers, the medical teams of Ukraine are doing”.

Kluge said that for mental health, “one in five people in conflict areas are likely to develop serious mental health problems”.

In the meantime, the United Nations reported an increase in sexual violence and exploitation in Ukraine.

“Sexual violence is a serious threat to most women and girls in conflict areas. I am deeply troubled by reports of an increase in sexual violence and exploitation in Ukraine, which ruins lives and is inadmissible,” Kluge said.

To address health challenges the WHO Foundation called on 12 May for additional funding for WHO’s Health Emergency Appeal for Ukraine.

It aims to raise €140 million in total, dedicating €76 million for in-country support, such as distributing medicines and delivering vital healthcare services.

“The need for medical supplies remains particularly high in the eastern regions where active fighting continues to put civilians at risk,” the WHO Foundation’s press release stated.

“This includes supplies for trauma and emergency care and life-saving treatments for people with non-communicable diseases, such as cardiovascular disease, diabetes, or cancer,” it said.