Coffee and croissant in a French cafe? You’ll need a COVID pass for that 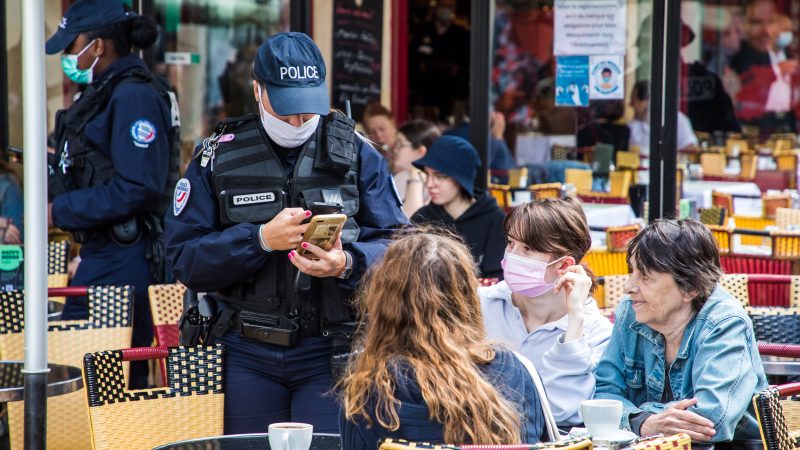 French police officers control customers' health passes at a bar in Paris, France, 9 August 2021. Starting from 9 August, the Covid-19 pass will be required in France to access cafes, restaurants, long-distance travel and, in some cases, hospitals. It was already in place for cultural and recreational venues, including cinemas, concert halls, sports arenas and theme parks with a capacity for more than 50 people. [EPA-EFE/CHRISTOPHE PETIT TESSON]

The French morning ritual of a coffee and croissant became more complicated on Monday (9 August) as people had to show proof of vaccination or a negative COVID-19 test before taking a seat at their favourite cafe, though numerous eateries ignored the new rules.

A health pass now has to be shown to eat in a restaurant, drink in a bar, access non-emergency treatment in a hospital or travel on an intercity train, part of a government drive to contain a fourth wave of infections.

President Emmanuel Macron unveiled the edict last month with a clear message: get vaccinated. Vaccination rates jumped as the French faced the prospect of being denied some daily pleasures but it also spurred a wave of street protests.

“It’s simple, we have downloaded an app … so we scan the QR code of the clients, and if it’s valid, they can enter. And if it’s not valid, we cannot serve them,” said Romain Dicrescenzo, manager of the Vrai Paris cafe in the capital’s Montmartre district.

He said he had turned dozens of people away – some who had forgotten the pass as well as those who had not been vaccinated.

Cafe and bar owners caught flouting the rule face a warning followed by a 7-day closure order on the second infraction. Two further contraventions could lead to a year’s jail time.

Even so, of the 10 restaurant and cafe owners Reuters spoke to in Paris on Monday, half said they refused to run the health pass checks. Police would take a lenient view initially, the Interior Ministry said.

Some other European countries such as Italy have introduced similar health passes, but France’s is the most comprehensive. Opponents of the pass say it impinges on their freedom and discriminates against those who do not want the COVID shot.

Health Ministry data showed nine in every 10 COVID patients admitted to intensive care in late July had not been vaccinated. A majority of French support the health pass, surveys show.

The legislation governing the health pass requirements will remain in place until mid-November. It also demands the mandatory vaccination of health workers.

Health pass checks were also being carried out at Paris’ Gare de Lyon station. Checks on trains will be random and carried out on one in every four long-distance trains on Monday, the transport minister said.

Cafe customer Issam Fakih, a petrol logistics worker, said: “I’m somewhat divided on the health pass to be honest. I’ve got vaccinated, because in my job, it’s important … Now, the pass is something that’s on my phone, so it doesn’t bother me when I’m asked for it.”

But he added: “I think it’s still an attempt to curtail some freedoms, but maybe some reactions are a bit exaggerated.”

2 responses to “Coffee and croissant in a French cafe? You’ll need a COVID pass for that”