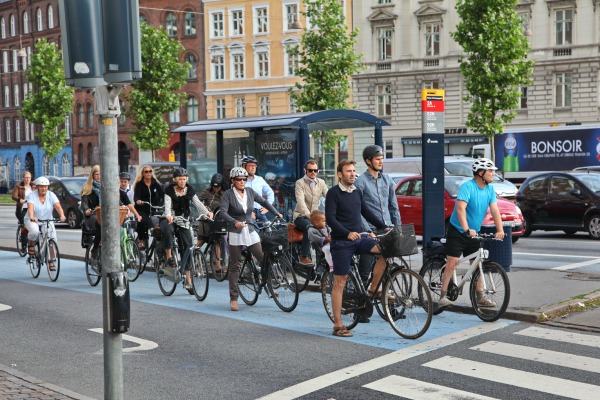 Cyclists wait for green light in the Danish capital. [Shutterstock]

According to a new study, over 76,600 people could become employed by green transportation businesses, and 10,000 lives would be saved, if major EU cities adopted Copenhagen’s bicycle sharing system.

Nearly 50% of Copenhagen’s residents commute by bicyle to work or school. Out of all city trips, 26% are undertaken by bike. This is only rivalled by Amsterdam, in the Netherlands.

The publication by the World Health Organisation’s (WHO) Regional Office for Europe and UNECE, Unlocking new opportunities, states for the first time that investing in green and healthy transport is also economically profitable. Zsuzsanna Jakab, WHO Regional Director for Europe, therefore urges governments to invest in the greener transportation.

“The pay-offs from these investments are enormous, and include new jobs and healthier people from more physical activity, fewer road traffic injuries, less noise and better air quality,” Jakab said.

Transport adds 24% to total greenhouse gas emissions in Europe and North America. Since it discourages physical activity, transport contributes to nearly 1 million deaths per year. In total, the costs linked to unsustainable transport can be up to 4% of a country’s GDP.

If Budapest reached the same biking levels as in the Danish capital, 298 lives would be saved per year. For London, Madrid and Paris, that number would be 542, 211 and 174 lives, respectively.

Cycling offers benefits for individual and for society as a whole. For individuals, cycling is healthy, flexible and fast.

For society, a large number of cyclists increases the smooth flow of traffic, reduces congestion and pollution, and brings societal health benefits as a result of increased exercise.