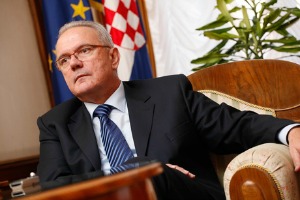 Neven Mimica, a senior minister in the Croat government, was appointed as the European Commission's 28th member, the EU Executive announced yesterday (25 April). Mimica will take up his duties in the Consumer Protection portfolio on 1 July, after a hearing in the European Parliament.

The Commission announced that Croatia had named Neven Mimica, 59, the country’s Deputy Prime Minister for Foreign Affairs and European Integration since 2011, as Commissioner designate, and that Commission President José Manuel Barroso had endorsed his candidacy.

“Neven Mimica is an experienced and committed European able to make an important contribution to the work of the European Commission, in particular in the critical field of consumer protection,” the Commission President said.

Mimica, an economist by profession, is a social-democrat. After his election in Croatia, he had previously served as Deputy Speaker of the House.

The Croatian commissioner had been expected to take a 'Tourism' portfolio, as the country has a well-developed tourism sector. Such a portfolio does not officially exist, although tourism falls under the Industry and Entrepreneurship portfolio held by the Italian Commissioner Antonio Tajani.

Croatia signed its accession treaty on 9 December 2011 in a surreal atmosphere of uncertainty over the fate of the European Union, which was in the midst of an unprecedented economic and financial crisis.

>> Read: Croatia joins a Union uncertain of its future

But as German Chancellor Angela Merkel said, the event showed that even under the difficult circumstances, the EU had lost "none of its attractiveness".

The former Yugoslav Republic is expected to become a full EU member as of 1 July 2013.

On 22 January, two-thirds of Croatians voted in favour of joining the European Union in a referendum.