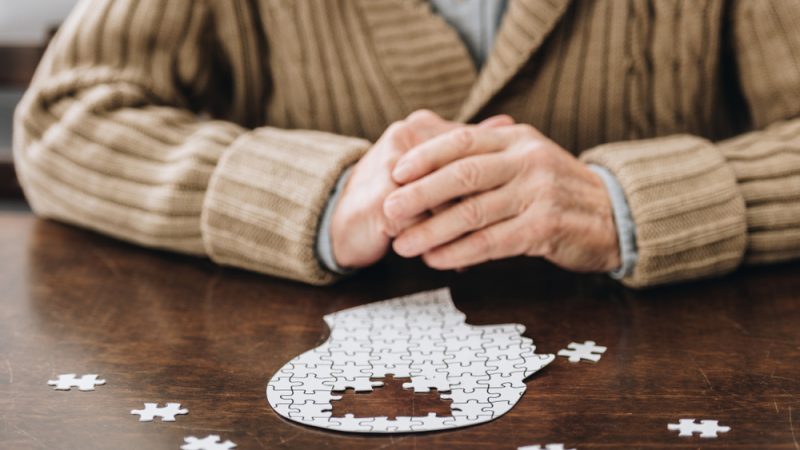 EURACTIV contacted Roberts and his wife Jayne Goodrick, who is simultaneously his carer and a member on the advisory panel of Dementia Carers Count in the UK, with an aim to highlight the challenges both patients and carers are facing on daily basis.   [Shutterstock/LightField Studios]

Dementia is among the top ten reasons people lose years of healthy life due to disability. Over the past 20 years, the loss of disability-adjusted life years due to dementia has more than doubled, the World Health Organisation (WHO) says.

Chris Roberts is a patient and the Chairperson of the European Working Group of People with Dementia.

EURACTIV contacted Roberts and his wife Jayne Goodrick, who is simultaneously his carer and a member of the advisory panel of the Dementia Carers Count in the UK, aiming to highlight the challenges both patients and carers face daily.

Getting mixed up with dreams and reality, not being able to write, facing problems with balance and mobility, not recognising friends and family and getting lost in your own house are just some of the daily challenges a dementia patient faces.

Roberts was diagnosed with Alzheimer’s and vascular damage when he was 50 years old. Before and during his dementia diagnosis, he also had emphysema.

“My memory was getting worse, and word-finding was sometimes quite difficult.

“I didn’t notice at the time, but sorting money, and loose change, was also becoming problematic. I compensated by paying with notes instead,” he said.

In the beginning, he thought it was down to my emphysema, but his doctor said, “no, that’s not emphysema”, and the testing started.

“My GP was very good and supportive, she referred me to our local memory clinic for testing. It took 13 months. I didn’t mind how long they took because we wanted a correct diagnosis, not a rushed one,” Roberts said.

During this time, he noticed that his driving was getting worse.

“I was looking down to see where my feet were supposed to be, forgetting where controls were, and kept getting lost in familiar places. I thought we lived in a world where everyone beeped their horns at each other[…] It turned out most were just beeping at me!” he said, adding that ultimately, he decided to give up his licence.

Diagnosis was a ‘relief’

Roberts stressed that he felt relieved after he was first diagnosed.

“At least, I now had a label that I wasn’t going mad, or it wasn’t a brain tumour. So we left the clinic with our welcome pack feeling completely lost and alone. We knew nothing about dementia. Why would we? I was feeling so guilty about putting my family in this position, and I was grieving”, he said.

Roberts said that after that, he immediately gathered all the family to discuss. After a diagnosis of dementia, the whole family also receives the diagnosis, and it becomes a team effort, he added.

“It has to be. With any life-changing illness, you have to change one’s life. Only then can you embrace, accept, and live with it!”.

He noted that mainly due to the misconceptions, myths, and what you see in the media, one is left thinking nothing can be done.

Asked about public support about the disease, Roberts said: “Everyone has heard the word, but not many actually understand it. It’s this lack of knowledge that makes us very fearful and afraid”.

“Just like that dark space under the bed when you are a child, but shine a light there, and it’s ok.”

Roberts also said patients should not fear of being stigmatised if they unveil their disease, as “people are very good when they know about my dementia and are very supportive in general, but more education and awareness is still needed.”

From a carer’s perspective, his wife Jayne Goodrick said the main challenge is that all of a sudden, the caring role is takes up more time than the personal needs of the carer diminish in a “slow and silent” way.

“The role of caring can become all-consuming – without the carer noticing,” she said.

“This is why all of a sudden people can go into crisis without previously having asked for help or support. This is why we advocate for pro-action from services, to delay or even prevent these crisis moments,” she added.

On a policy level, she said there could be legislation where the authorities are obligated to contact the carer each month to see how things are and if any further support is needed.

But this, she said, could be seen as ‘Big Brother’ and intrusive, so it is a very fine balance between pro-action and interference.

“Also, so much input could make the carer feel judged, or watched, for any mistakes or perceived lack of skill, inducing fear of that help.”

She added that in Wales, there is a carers’ needs assessment, which is “an assessment of what I need, what matters to me”.

“This takes place (supposedly) once a year, which is fine in the early years, but as dementia progresses, so should the needs assessments”, she added.

“We need to have a whole rethink around the options and requirements of respite so that I have a break, and him a break from me, but not at the cost of his being incarcerated in a locked care home, with people who have far more complex needs than he, sat there looking at his future. That will do neither of us any good,” she concluded.

2 responses to “Dementia: everyone has heard the word, but no one understands”