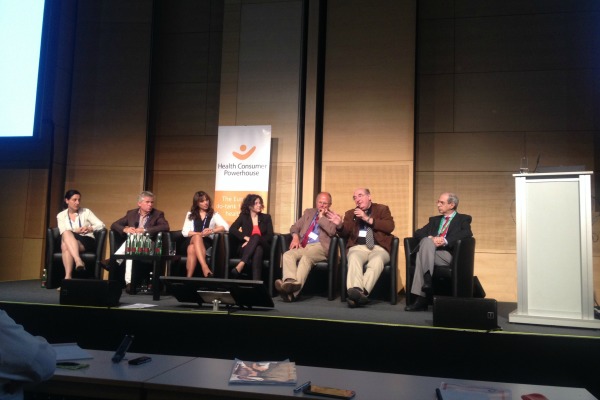 Health experts discuss diabetes issues at the European Association for the Study of Diabetes in Vienna, Austria, on 17 September 2014 [Henriette Jacobsen]

SPECIAL REPORT: Reliable data should be the first step to improve diabetes care in the EU, according to representatives from European Union health ministries and national healthcare institutes who were speaking in Vienna on Wednesday (17 September).

While prevention and treatment of diabetes has improved over the past decades, the lack of comparable data between EU member countries makes it impossible for them to share best practices.

Sweden came first in the 2014 Diabetes Index, which ranks EU member states, Norway and Switzerland according to their strategies to fight diabetes. But the Nordic country came first only because it was the only one which had data for all the 28 indicators measured in the index. These include prevention, case finding, access to treatment, and outcomes. The index is published by the Health Consumer Powerhouse (HCI).

“We need more data, but the problem is that I think it’s only in Scandinavia that people trust their governments to have data on individuals,” said Fred Storms, senior advisor to the Dutch National Institute for Quality in Healthcare. “The rest of Europe is a bit more reluctant,” he remarked.

“Only when you have the data, you can have diabetes care,” Storms told at a conference organised in Vienna by the European Association for the Study of Diabetes.

At the moment, only seven of the 30 countries measured in the index have national diabetes registries.

Juan Riese, a scientific and technical advisor at the Health Institute Carlos III in Spain, said that diabetes care works well in Europe, but agreed that by sharing best practice among member states, it can be further improved.

Diabetes is a growing problem for EU healthcare systems. In 2013, more than 32 million Europeans had diabetes, or 8.1% of the population, according to the International Diabetes Federation (IDF). By 2035, this number is expected to grow to 38 million. Only half of the population with diabetes have been diagnosed.

Andrzej Bauman, president of the Polish Diabetes Association, flagged poor education and insufficient access to modern medication as the most pressing challenges in his country. He added that Poland also has poor complications management, leading to more frequent amputations.

“If it would be at all possible, I think the EU should make it possible to have more uniform healthcare systems,” Bauman told EURACTIV on the sidelines of the conference.

In Slovenia, the Euro Diabetes Index has had an impact on how the country deals with diabetes.

Since 2008, when the first index was launched, Slovenia has used the indicators to form regional registries which has moved the country’s ranking up from the bottom to 6th place.

The Health Ministry has divided the country into three regions, in order to better detect the development in care and compare best practices, said Jelka Zalatel, a spokesperson from the ministry. She said using the indicators from the Euro Diabetes Index had improved the coordination of screening high-risk groups.

“In Slovenia, we now do a lot of screening and it’s actually cheap. We just need to communicate to people why we are doing it,” she said.

in Germany, diabetes has been tackled well although the country does not have a national plan to fight the disease, said Carsten Petersen from the Diabetes-Schwerpunktpraxis Internistische Gemeinschaftspraxis in Schleswig.

Some regional governments do have a prevention plan however, such as Schleswig-Holstein which screened 400 people since 2007.

“We want family doctors to have a role in diabetes prevention,” Petersen said. “We  want different interventions. For all people who are obese and have a BMI above 30, we send them a start kit with information on calorie intake and a calendar where they can mark days with physical activities”.

While the HCP calls for national diabetes registries, they also state that systematic screening among high-risk groups must be a reality to detect undiagnosed cases. Today such screening hardly exists in many countries.

Diabetes is a chronic disease characterised by high blood sugar levels over a prolonged period.

Untreated, diabetes can cause many complications including heart disease, stroke, kidney failure, damage to the eyes and foot ulcers, which sometimes require amputation.

50% of all people with diabetes die of cardiovascular disease, making diabetes the fourth most common cause of death in Europe, EDLF figures show.