EU asks for big penalties against AstraZeneca over dose delays 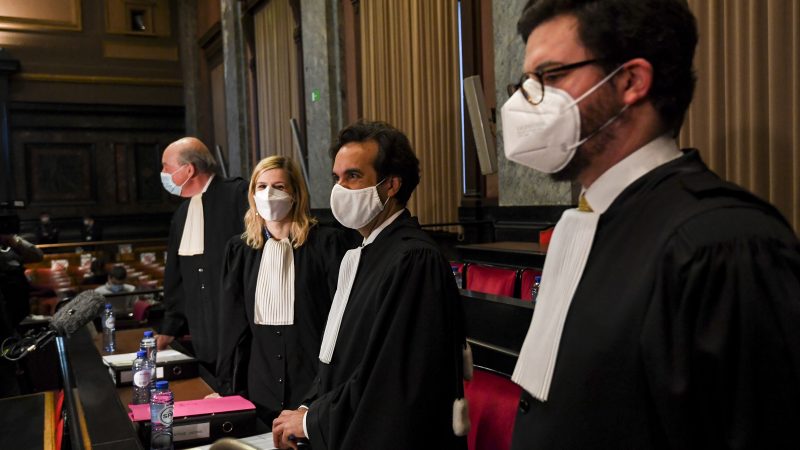 (L-R) EU Commission's lawyers Paul Alain Foriers, Fanny Laune, Charles-Edouard Lambert and Rafael Jafferali at the start of the trial of the European Commission and AstraZeneca at the Courthouse in Brussels, Belgium, 26 May 2021. [Stephanie Lecocq/EPA/EFE]

The European Union on Wednesday (26 May) asked a Belgian court to impose penalties running to millions of euros per day on AstraZeneca for COVID-19 vaccine doses it has failed to deliver to the bloc.

The request came as EU countries and their executive, the European Commission, began legal action against the Anglo-Swedish pharmaceutical company for “flagrant violation” of its contract with Brussels.

AstraZeneca’s lawyer Hakim Boularbah rejected the EU claim, declaring: “There was no manifest breach of contract. It is very shocking to be accused of fraud.”

The EU is suing AstraZeneca to force it to deliver 90 million more doses of its coronavirus vaccine before July, arguing that the company failed in its contractual duty by handing over only a fraction of promised shots.

The deadline for the contract is set for mid-June, according to the Commission, and the EU says the company should face financial penalties if it does not meet this deadline.

The EU’s legal team demanded an upfront fine of €10 million plus “10 euros per dose and per day of delay” in that event.

AstraZeneca delivered only 30 million doses in the first quarter out of the 120 million it was contracted to supply. For the current quarter, which runs until June 30, it plans to deliver only 70 million of the 180 million doses initially promised.

A Commission official close to the case told AFP this month AstraZeneca was currently delivering doses at a rate of only 10 million per month, well below the planned pace.

But Bourlarbah told the court the firm would eventually supply 300 million doses and that “everything is being done to resolve the problems”.

The company’s defence relies on a part of the contract that speaks of “best reasonable efforts” by AstraZeneca and declarations that production was hit by unavoidable delays.

AstraZeneca’s French-Australian boss Pascal Soriot laid out the argument ahead of the court case in a series of interviews with the press.

But the lawyer for the EU, Rafael Jeffareli, argued in court that the firm had prioritised supplies to Britain and beyond, while failing to make the best effort to step up production at its EU site in the Netherlands, operated by sub-contractor Halix.

Jeffareli alleged that for several weeks after the EU signed its contract with the firm in September last year, the Dutch plant had continued to supply markets other than the EU.

“Best effort means flexibility. Why did the switchover of the Halix site (to EU supply) only start on October 13?” he demanded.

The Halix plant in Leiden, the Netherlands, had sent supplies to Japan at the end of last year, he said. In total, “50 million doses were diverted to third countries in flagrant violation of the contract”.

The drugs giant’s team told the court that AstraZeneca was one of the major suppliers of vaccines to poorer countries facing an ongoing Coronavirus crisis, whereas Europe is already better supplied.

“The urgency today is not so much vaccination in Europe, it’s that of the world population,” Boularbah said.

AstraZeneca, which worked with Britain’s Oxford University in the development of its vaccine, denies having failed in its obligations. It rejects the lawsuit as “unfounded”.

The company’s team said the EU had been warned in February of the delays, which came after the vaccine was developed and put into production at “unprecedented speed”. They argued the contract did not oblige them to meet particular deadlines.

The judge in the case set 4 June as the next court date in order to possibly question both parties. A final ruling is not expected before the end of June.

The commission, which has procured vaccines on behalf of the whole of the EU, initially intended the AstraZeneca jab as the main workhorse in the bloc’s inoculation drive.

It has now switched to the more expensive Pfizer/BioNTech vaccine as its mainstay.

The row has eroded public confidence in the AstraZeneca jab, which is also suffering negative perceptions in some countries because of worries over links to very rare fatal blood clots that can prove fatal.

Denmark stopped using AstraZeneca in its vaccination campaign as early as April, followed later by Norway and Austria.

Most other countries have restricted its use to older adults, including in France where it is reserved for those aged 55 and over.