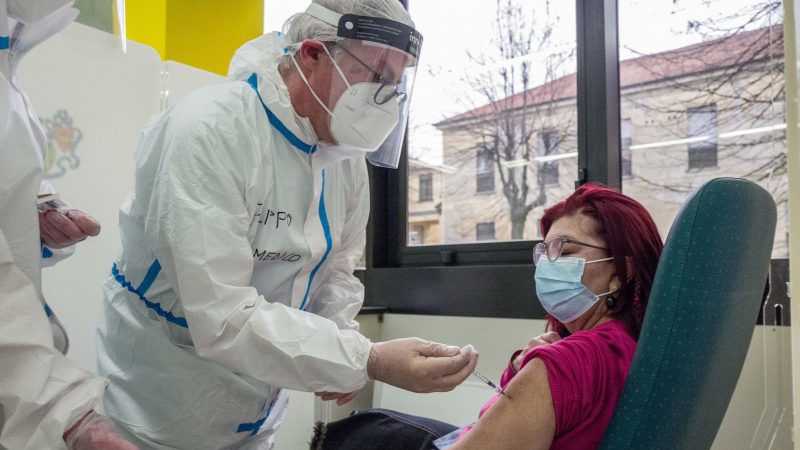 Vaccination Day against Coronavirus COVID-19 at the "Pio Albergo Trivulzio" nursing home in Milan, Italy, 27 December 2020. The EU is launching a coordinated vaccine rollout to fight Covid-19, as the Pfizer-BioNTech vaccine has been delivered to all 27 member states. [Pool/EPA/EFE]

EU countries on Sunday (27 December) embarked on a vaccination campaign to defeat the “nightmare” of Covid-19, with the first to be immunised expressing emotion after their jab and leaders hailing a milestone in the fight against the pandemic.

The vaccine is a glimmer of hope for a continent yearning for a return to normal from a pandemic that has killed 1.76 million people worldwide since emerging in China late last year and caused at least 80 million confirmed cases, according to an AFP tally.

But polls have shown many Europeans are unwilling to take the vaccine, which could impede its effectiveness in beating the virus, while it will take months for large chunks of the population to be immunised.

“It is with deep pride and a deep sense of responsibility that I got the vaccine today. A small gesture but a fundamental gesture for all of us,” said Claudia Alivernini, 29, an Italian nurse who was the first in her country to receive the Pfizer-BioNTech jab Sunday morning.

In Greece, the first in line was nurse Efstathia Kampissiouli who flashed a V-sign while being vaccinated and later told Ert TV it was “a great honour for me but also for those working on the front line.”

European Commission chief Ursula von der Leyen hailed the campaign start as a “touching moment of unity and a European success story”, adding the process will “help to get our normal lives back gradually.”

Countries are however showing different strategies, with Italy focusing on health workers, France the elderly and in the Czech Republic, Greece and Slovakia political leaders at the front of the queue.

But the introduction of the vaccine worldwide is far from the end of the crisis. In a bleak assessment, top US government scientist Anthony Fauci warned Sunday that “as we get into the next few weeks, it might actually get worse”.

Israel on Sunday began a nationwide two-week lockdown — its third since the pandemic started — after a sharp rebound in the infection rate.

A new strain of the virus that emerged in Britain has already reached several other European countries as well as Japan, Canada and Jordan and intensified fears of more Covid-19 havoc to come.

The new strain — which experts believe is more contagious — prompted more than 50 countries to impose travel restrictions on the UK.

Echoing concerns from officials across the continent, Health Minister Olivier Veran said France has not ruled out imposing a third nationwide lockdown if coronavirus cases continue to rise after the holiday season.

He said it would become clear in the next months if the vaccine might not just stop people falling sick but also prevent the virus from being passed on.

“This would allow us to leave this nightmare quicker,” he said.

Some EU countries began vaccinating on Saturday, a day before the official start, with a 101-year-old woman in a care home becoming the first person in Germany to be inoculated and Hungary and Slovakia also handing out their first shots.

Araceli Rosario Hidalgo Sanchez, a 96-year-old living in a care home in central Spain became the first person in the country to be vaccinated on Sunday, in an event broadcast by national television. She said smilingly she felt “nothing” from the shot.

France began its campaign in care homes for the elderly in the Paris suburb of Seine-Saint-Denis, a low-income area hard hit by Covid-19, with a 78-year-old woman named Mauricette the first to receive the jab to applause from staff.

“We have a new weapon against the virus — the vaccine,” tweeted President Emmanuel Macron.

But a poll published in the Journal du Dimanche saying 56% of French people do not plan to take the jab.

Swedish Prime Minister Stefan Lofven described the vaccine as a “ray of light in the darkness”. One of the first Swedes to get the vaccine, Stig Larsson, 89, said he “did not hesitate” about being inoculated.

With surveys pointing to high levels of hesitancy towards the vaccine in countries from France to Poland, leaders of the 27-country European Union are promoting it as the best chance of getting back to something like normal life next year.

But Ireneusz Sikorski, 41, leaving church in the Polish capital of Warsaw, was sceptical.

“I don’t think there’s a vaccine in history that has been tested so quickly,” he said. “I am not saying vaccination shouldn’t be taking place. But I am not going to test an unverified vaccine on my children, or on myself.”

In Bulgaria, the first to get the jab on Sunday were the health minister and doctors known from the TV screen. The start of the vaccination campaign was marked by mockery in social media of transport used for the vaccines – vans with the logo of a sausage company. The government responded by saying that what matters is the cooling equipment, not the logo.

Distribution of the shot presents tough challenges as the vaccine uses new mRNA technology and must be stored at about -70 degrees Celsius.

In Germany, the campaign faced delays in several cities after a temperature tracker showed that about 1,000 shots may not have been kept cold enough during transit.

“This is where the variations in temperature occurred. We are in contact with many authorities to provide advice, however it is up to them how to proceed”, a spokeswoman said.

Authorities in Bavaria’s Upper Franconia region, one area that had been affected, later said BioNTech had cleared the vaccines.

“BioNTech has confirmed the quality of the vaccine shots,” a spokeswoman said. “The vaccination programme can start (in our region).”

The Pfizer shots being used in Europe were shipped from its factory in Puurs, Belgium, in specially designed containers filled with dry ice. They can be stored for up to six months at Antarctic winter temperatures, or for five days at 2C to 8C, a type of refrigeration commonly available at hospitals.

Vaccines other than the Pfizer-BioNTech jab are also in the pipeline, and the United States, where over a million people have already been vaccinated, last week began jabs with the vaccine developed by US biotech firm Moderna.

Meanwhile the University of Oxford and drug manufacturer AstraZeneca have applied to the UK authorities for permission to roll out their Covid-19 vaccine, which chief executive Pascal Soriot described as a “winning formula”.