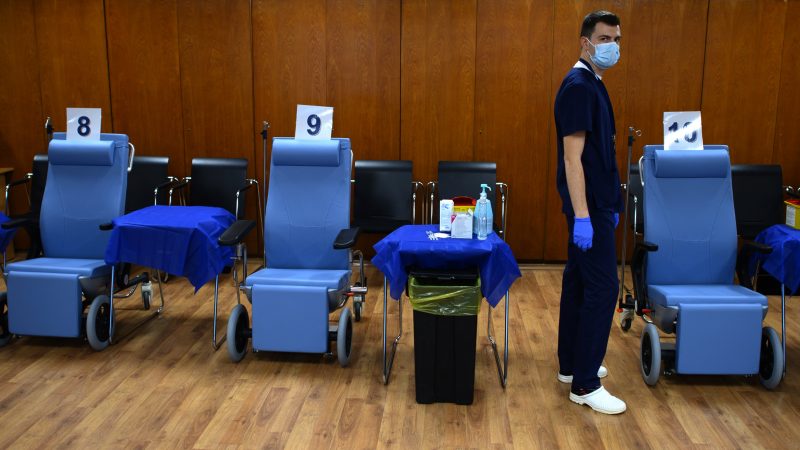 A paramedic is waiting for people to be vaccinated against COVID-19 at Military Medical Academy in Sofia, Bulgaria, 22 February 2021. The Government dispensed the phase strategy and offers it to anyone who wants, which is largely due to the influence of anti-vaxxers. [Vassil Donev/EPA/EFE]

At least 200 million doses of Covid-19 vaccines have been given in the European Union as of Tuesday (18 May), according to AFP data tallying up official figures given by member states’ health services.

The milestone indicates that the EU should be on track to meet its goal of fully vaccinating 70% of adults — meaning roughly 255 million people out of its total 448 million population — by late July.

As of 0830 GMT, at least 200 million doses have been administered in the EU, according to the AFP data.

At least 52.9 million people have been completely vaccinated, with two doses in the case of the vaccines from BioNTech/Pfizer, Moderna and AstraZeneca, or one dose for those inoculated with the single-shot Johnson & Johnson vaccine.

That figure amounts to 11.8% of the EU population.

The data showed that Malta was leading the EU table, with 32.5% of its small population fully vaccinated, while Bulgaria was trailing badly, with just 6.1% inoculated.

Globally, the AFP data showed that 1.5 billion doses have been administered.

By way of comparison with other wealthy territories, Israel has 59% of its population inoculated with two doses, while the United States has 35% fully vaccinated, and Britain has 30% done.

The European Commission, contacted by AFP, did not immediately respond with comment about the vaccination milestone.

It did however say that its vaccine export authorisation mechanism had, between 30 January and 11 May, approved 941 export requests from pharmaceutical companies producing Covid-19 vaccines in the EU and rejected one — a March shipment of 250,000 AstraZeneca doses meant for Australia.

The vaccines exports went to 45 countries and territories, it said, including the United States, Britain, Israel, India, Australia, Canada and Brazil.