G20 nations emphasised the need for global access to coronavirus vaccines at a Saudi-hosted virtual summit Saturday (21 November) dominated by efforts to tackle the pandemic and the worst global recession in decades.

World leaders, including US President Donald Trump who is refusing to concede a bitter election, popped up in multiple windows across a flickering screen, in a high-stakes webinar held amid the raging pandemic.

The leaders are huddling online for the two-day gathering as international efforts intensify for a large-scale rollout of coronavirus vaccines after a breakthrough in trials, and as calls grow for G20 nations to plug a $4.5-billion funding shortfall.

“Although we are optimistic about the progress made in developing vaccines, therapeutics and diagnostics tools for Covid-19, we must work to create the conditions for affordable and equitable access to these tools for all people,” said Saudi King Salman, the summit’s host.

“We have a duty to rise to the challenge together during this summit and give a strong message of hope and reassurance to our people by adopting policies to mitigate this crisis,” he told world leaders in opening remarks.

Chinese President Xi Jinping spoke of the need to build a “global firewall against Covid-19” as he called on G20 nations to help distribute vaccines “fairly and efficiently”, according to state news agency Xinhua.

And French President Emmanuel Macron said the health crisis was “a test for the G20”, stressing there “will be no effective response to the pandemic unless it is a global response”.

“We need to avoid at all costs a scenario of a two-speed world where only the richer can protect themselves against the virus and restart normal lives,” Macron told the summit.

To do that, the European Union urged G20 leaders quickly to put more money into a global project for vaccines, tests and therapeutics – called Access to COVID-19 Tools (ACT) Accelerator – and its COVAX facility to distribute vaccines.

“At the G20 Summit I called for $4.5 billion to be invested in ACT Accelerator by the end of 2020, for procurement & delivery of COVID-19 tests, treatments and vaccines everywhere,” European Commission head Ursula von der Leyen said on Twitter.

“We need to show global solidarity,” von der Leyen said, announcing that next year, under Italian G20 presidency, a global health summit would be held.

#COVID19 taught us that we need to step up global preparedness.

Next year, Prime Minister @GiuseppeConteIT & I will convene a Global Health Summit under the Italian G20 Presidency.

We’ll discuss the lessons learned from the crisis to better protect humanity against pandemics. pic.twitter.com/qsPwv5dvl8

Germany was contributing more than €500 million to the effort, Chancellor Angela Merkel told the G20, urging other countries to do their part, according to a text of her remarks.

To prepare for future outbreaks, the EU is proposing a treaty on pandemics. “An international treaty would help us respond more quickly and in a more coordinated manner,” European Council President Charles Michel told the G20.

#COVID19 is not the first global pandemic.  And sadly, it won’t be the last. So we need to be better prepared.

At the #G20Summit I will propose an international Treaty on Pandemics — to help us prevent pandemics & respond in a more coordinated manner.#G20 #StrongerTogether pic.twitter.com/iRlZzpTxfK

As the trailblazing event got under way, there had been some early quirks, with someone heard telling King Salman that “the whole world is watching” before the event started and Xi apparently having to call for technical help.

With Saudi hopes for a grand coming-out parade dashed due to the pandemic, the event has been reduced to brief online sessions of what observers call “digital diplomacy”.

Despite having to abandon much of the usual summit pageantry, Saudi Arabia launched the meeting with an aerial acrobatics display over Riyadh.

Along with Xi and Macron, Turkish President Recep Tayyip Erdoğan also addressed the summit, where sources said climate change was among the issues topping the agenda.

Trump, who continues to reject his election defeat, was briefly dialled into the meeting and “spoke about the aggressive actions and safety measures the United States took to protect the vulnerable, pioneer groundbreaking treatments, and develop vaccines and therapies at record-setting speed, which will save millions of lives,” according to a White House statement. He then went golfing.

G20 nations have contributed more than $21 billion to combat the pandemic, which has infected 56 million people globally and left 1.3 million dead, and injected $11 trillion to “safeguard” the virus-battered world economy, organisers said.

Last week, its finance ministers declared a “common framework” for an extended debt restructuring plan for virus-ravaged countries, but campaigners say the measure is insufficient.

The ministers had extended a debt suspension initiative for developing countries until June next year but UN Secretary-General António Guterres has pushed for a commitment to push it until the end of 2021.

International Monetary Fund managing director Kristalina Georgieva has warned that the global economy faces a hard road back from the Covid-19 recession, even as vaccines are now in sight.

G20 nations must help plug the $4.5-billion funding gap in the so-called ACT-Accelerator, Norway’s prime minister, South Africa’s president and the heads of the European Union and the World Health Organization demanded in a joint letter to the group.

The programme promotes an equitable distribution of Covid-19 vaccines including poor countries to rein in the pandemic. 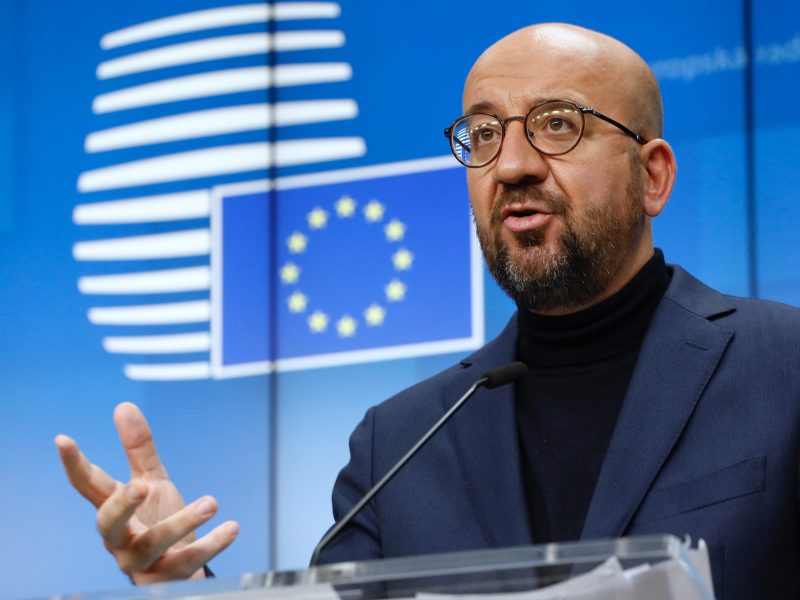 European Council President Charles Michel on Friday (20 November) called on G20 leaders to create “a new model of sustainable finance” to avoid sovereign defaults in the wake of the COVID-19 crisis.

Saudi Arabia’s human rights record has cast a shadow on the gathering, as campaigners and families of jailed activists launch vigorous drives to highlight the issue.

Investment Minister Khalid al-Falih was asked at a news conference if Saudi Arabia needs to try a different approach to overcome negative headlines, including over the October 2018 murder of journalist Jamal Khashoggi and the imprisonment of critics in an ongoing crackdown.

“Investors are not journalists, investors are looking for countries where they can place their trust in an effective government that has proper economic decision-making,” Falih answered.

Some Western officials have indicated human rights will not be raised at the summit, saying they prefer to use bilateral forums to discuss the issue with Riyadh.

“Instead of signalling its concern for Saudi Arabia’s serious abuses, the G20 is bolstering the Saudi government’s well-funded publicity efforts to portray the country as ‘reforming’ despite a significant increase in repression,” said Michael Page from Human Rights Watch.