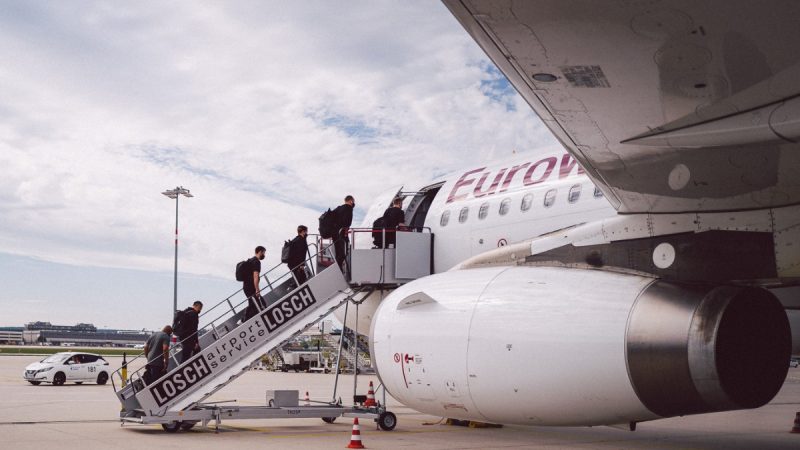 Germanys footballers board their short flight to Basel. [Photo: DFB]

The German football team has faced criticism for flying between the cities of Stuttgart and Basel on Sunday (6 September) instead of taking a train on the 260-kilometre journey. The Bundesrepublik’s football federation cited virus restrictions as a deciding factor.

Germany’s Die Mannschaft boarded a chartered plane to reach Basel for their Nations League match against Switzerland. Although their performance only yielded a 1-1 draw, it was their travel plans that stoked the most blowback.

Rail journeys between the two cities take under three hours but the German football federation (DFB) insisted that the train option was not possible due to coronavirus measures and the difficulty in isolating players from other travellers.

The federation also ruled out a long bus journey, citing player health and fitness. Defender Thilo Kehrer also said that neither the bus nor train are optimal for fitness levels.

But strong reactions on social media and from the German media prompted the DFB’s Oliver Bierhoff – a former star striker – to defend the team’s decision to focus on player welfare over climate impact.

“We can understand the criticism,” DFB’s national director said. “We will be using this opportunity to ask ourselves how we can take sustainability and environmentalism more into account in our future plans.”

That response was given short shrift by the Stay Grounded Network, a civil society group that advocates for fewer flights: “The DFB’s statement afterwards is unsatisfactory. Also, football has to take its ecological responsibility.”

It is not the first time a football team has faced criticism over its travel plans. In February, French outfit Lyon was admonished by fans for taking a private jet to Paris instead of the two-hour high-speed train journey.

Green MEP Karima Delli, the head of the European Parliament’s transport committee, has urged footballers to take the rail option when the trip can be done in under six hours.

This summer’s European football championship, which was delayed until 2021 because of the pandemic, had drawn criticism even before because organisers had decided to make it a pan-Europe affair with various host cities, instead of the traditional choice of a single country.