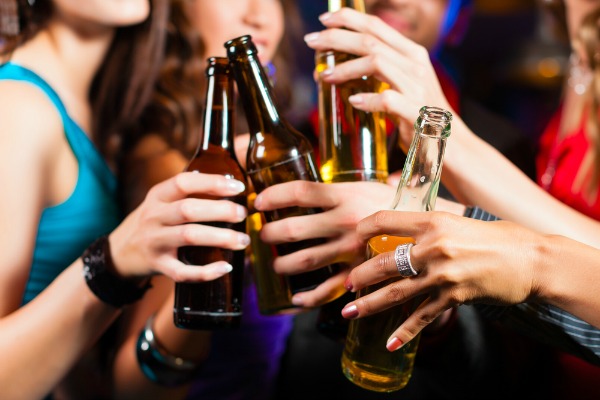 Europeans consume the highest quantities of alcohol, globally, according to the World Health Organisation. [Shutterstock]

Though the Scottish government initiative to put a minimum unit pricing (MUP) on alcohol has been referred to the European Court of Justice, some members of Scotland’s alcohol industry are backing the initiative to tackle alcohol harm in the country.

An average adult (aged 15+ years) in the EU consumes 12.5 litres of pure alcohol or nearly three drinks a day, the World Health Organisation (WHO) stated in a 2012-report. This is more than double the world average.

Scotland is facing severe health problems related to hazardous drinking among certain groups in society. In 2011, the alcohol-related death rate in Scotland was almost twice that of 1982. Hospital admissions for alcoholic liver disease have more than quadrupled in the past 30 years. Scotland now has one of the highest cirrhosis mortality rates in Western Europe.

Speaking at a conference, organised by the European Public Health Alliance (EPHA) on Friday (5 September) Peter Rice, chair of the Scottish Health Action on Alcohol Problems (SHAAP), argued for the MUP policy, which sets a ‘floor price’ below which alcohol cannot be sold, based on the amount of alcohol contained in the product. MUP will particularly benefit harmful drinkers on low incomes in terms of improved health and well-being, he said.

“There is a relationship between alcohol consumption and liver deaths. If we want to reduce the mortality, we have to tackle alcohol consumption. Liver mortality in the UK has gone up more than 500% since the 1970s. This is just a disgrace,” Rice said.

“Tackling price is the most effective and cost-effective way of tackling the issue. It will affect the whole population. It will affect the heaviest drinkers more because they spend more. My patients are drinking so much that they are all buying the cheapest booze they can find,” the chair of SHAAP added.

Rice mentioned that in France, consumers decided to buy more expensive wine as they became for educated on health. But while consumers started drinking less wine, they spent the same amount of money as they chose quality.

“We need to reduce alcohol harm in Scotland, and we have been looking for an instrument which would chase where the harm existed. The harm exists among lower-income groups, as indeed most health problems do. We believe this is the right policy for Scotland. We believe it can solve many of the health problems which Scotland is facing, but we do not think that this is a policy which should be implemented in every country,” Henderson stated.

The case of the MUP in Scotland has been referred to the European Court of Justice (ECJ) to ask for its opinion. MUP will not come into force until the legal process is complete. In considering its position, the ECJ will ask for written submissions from EU member states, trade bodies and the Scottish government, as well as from the European Commission. This will happen towards the end of 2014 or early 2015.

UK and EU trade laws allow in principle for the setting of a minimum price for the retail sale of alcohol for public health purposes by a government or public authority. The Scottish legislation was passed without opposition in May 2012. The Minimum Unit Price (MUP) was set at 50p per unit. The legislation should have been implemented in April 2013.

The case of the MUP in Scotland has been referred to the European Court of Justice, for its opinion. MUP will not come into force until the legal process is complete. In considering its position, the ECJ will ask for written submissions from EU member states, trade bodies and the Scottish government, as well as from the European Commission. This will happen towards the end of 2014, or in early 2015.

Henderson added that the Scottish MUP should fall under the category of the benefit of public health under the EU Treaty.  As it will affect all categories of alcohol the same way as opposed to food and drinks taxes, it does not discriminate, he said.

“It’s not acceptable what is happening in the market at the moment. In Scotland, it’s clear that we have a unique relationship with alcohol. It is a problem. It’s not affecting all people, but there is a significant minority who do need to be thought carefully about,” he stated.

Paul Watson, CEO at the Scottish Licensed Trade Association, mentioned that his association has argued for alcohol price control since this was abolished in the 1960s, because there have been unscrupulous bar operators, cutting alcohol prices, or running irresponsible drinks operations.

“We have repeated that cutting alcohol prices to boost sales would have a detrimental effect on our reputation and development of our trade and we have significantly increased alcohol problems in our country. Minimum pricing is a crucial piece of legislation which can help us to continue to improve our trade and continue to provide quality premises at the centre of the sale,” the CEO said.

The EU’s Alcohol Strategy, launched in 2006, is designed to help national governments and other stakeholders coordinate their action to reduce alcohol related harm in the EU.

However, the strategy does not impose concrete legislation on member states at this stage, relying instead on policy coordination and exchanges of best practices between countries. To do this, the strategy introduced an alcohol and health forum, launched in 2007, where member organisations - public and private - are invited to debate, compare approaches and take action to tackle alcohol-related harm.

Harmful alcohol consumption also has a negative impact on labour and productivity. Therefore, the EU wants to foster workplace-based initiatives. Stakeholders such as business organisations and trade unions have a particular responsibility in this regard.