A new European Commission proposal to reform advertising rules on television and online has opened a new battlefield for health NGOs, advertisers and the alcohol industry.

The Commission presented a new draft proposal last Wednesday (25 May) of the Audiovisual Media Services Directive (AVMSD), which governs EU-wide coordination of national legislation on all audiovisual media, both traditional TV broadcasts and on-demand services.

The objective of the proposed review was to make Europe’s audiovisual media landscape fit for purpose in the digital age.

The AVMSD is the only available EU media regulation on alcohol advertising and has two articles dedicated to it (article 9.1 and article 22).

In order to update the directive, the executive conducted an evaluation of current rules, held a public consultation, and commissioned a study to measure minors’ exposure to alcohol advertising.

The draft proposal focuses on the development of self-and co-regulation to protect minors from alcohol advertising, and does not impose any particular model on member states, who remain free to apply their own system.

But according to health and consumer NGOs, the new proposals “do not effectively protect minors from frequent exposure to alcohol advertising, which is often particularly attractive to minors”.

They also accused the executive of “willingly” ignoring a vast body of research showing that alcohol industry self-regulation stands at odds with improving public health.

“This shows how market interests are put above European public health,” the NGOs said in a statement.

EUCAM’s President, Wim van Dalen, told euractiv.com he was very disappointed with the proposals. “This AVMSD is in no way protecting young people against the proven harmful impact of alcohol marketing,” he said suggesting that the Commission gave in to industry pressure.

“DG Connect probably listened with big ears to the arguments of the alcohol industry,” he said.

Contacted by EURACTIV, European Commission spokesperson for the Digital Single Market, Nathalie Vandystadt, said that the draft proposal maintained and improved these rules according to a “problem-driven and evidence-based approach”.

When it comes to alcohol advertising, based on the evidence gathered and a detailed impact assessment, effective measures depend very much on the circumstances of each EU member state, she said, stressing the difficulties of adopting an EU-wide approach.

“For example, as regards limiting the hours during which alcohol advertising can be broadcast (so-called watersheds), the study shows that the time at which children watch TV changes from one member state to the other. It is therefore difficult to have an EU approach. Also watersheds are not always the most efficient solution,” Vandystadt noted.

“If efficiently designed, self and co-regulatory systems can be very effective because they involve and address all relevant stakeholders and in particular the advertising industry,” she concluded.

“Watersheds not always an efficient solution”

EURACTIV also spoke with European Commission analysts, who said that watersheds had not always resulted in effective solutions.

“For example, in the Netherlands, which has a watershed, the study shows minors are slightly more exposed to alcohol advertising than in the UK, where they have a co-regulatory system,” a Commission expert said, adding that Denmark, which does not have any statutory restrictions on alcohol advertising other than the minimum ones of the AVMSD, has the second lowest exposure. 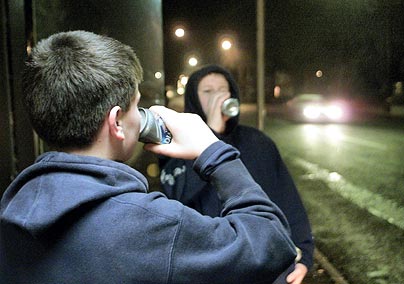 “This is indicating the effectiveness of self-regulatory measures, although other factors may also be at play.”

Commenting on the draft proposal, Adam Gagen, Director of Legal and Public Affairs at the World Federation of Advertisers, said it was important that the European Commission strengthened the call for robust co/self-regulatory systems on alcohol advertising.

“This builds on the detailed rules already in place at EU and national level, and is consistent with the approach taken in the proposal on other key issues,” he told EURACTIV, adding that such a system will drive member states, civil society and industry to expand and enhance protections for minors no matter where or how they watch TV.

Gagen said that minors already spend the majority of their time online, and this is only going to increase.

“Much is already being done, but the Commission’s proposal helps to ensure that further action and innovation to protect minors will keep pace with technological developments, and will remain a top priority across the EU,” he added.

SpiritsEurope, which represents the spirits and liquor producers in Europe, welcomed the Commission’s proposal saying it favours a healthy policy mix allowing rules to be adapted as rapidly as necessary.

Paul Skehan, Director General of SpiritsEurope, told EURACTIV that selling alcohol to minors is illegal, and rightfully so are ads targeted at them.

However, he insisted, commercial communications for alcoholic beverages were framed by strict national regulations, and were supplemented by national self-regulatory codes looking at advertising content and placement.

“In practice, self-regulatory rules applied to marketing communications of spirits drinks go well beyond the provisions in the AVMSD, and apply to all media indistinctively,” he noted.

EXCLUSIVE / The European Commission has again delayed the publication of a report on how to include alcoholic drinks under existing EU labelling rules on nutrition and ingredients.

“By allowing room for effective self and co-regulation to complement statutory legislation, the past AVMSD has allowed us to develop responsive systems,” Skehan said.

Another aspect of the new proposal is the liberalisation of broadcast advertising times, which for different reasons the World Federation of Advertisers and EUCAM oppose.

Currently, there is a limit of 12 minutes of advertising per hour, a cap that the Commission proposed lifting altogether.

The World Federation of Advertisers believes this particular proposal goes too far, saying it could put viewers’ TV experience at risk.

“The removal of the 20% cap per hour currently in place means that, if member states were to implement such a change, people will likely see far more advertising in and around primetime television, thus interrupting their favourite TV shows and events,” Gagen stated.

For their part, health NGOs fear this liberalisation will increase the possibilities of harmful content for minors.

“Because of a liberalisation of broadcast advertising times, it is possible that minors will be exposed to an even greater number of alcohol advertisements,” EUCAM notes.

The Audiovisual Media Services Directive (AVMSD) sets out rules for European television broadcasters and on-demand services on advertising, the ratio of European to non-European content shown, hate speech and protection of minors. The current directive was passed in 2007.

The European Commission presented an overhaul of those rules last week (25 May), requiring video-on-demand providers like Netflix and Amazon Prime to devote 20% of their content in Europe to European movies and TV programmes.

The proposals are part of the Commission's digital single market strategy.

Video on-demand services will also have to comply with rules that protect minors. Some broadcasters already follow limitations on what time of day potentially harmful content can be shown.

The Commission proposes restrictions that “may include selecting the time of the broadcast, age verification tools or other technical measures”. The most harmful content, such as gratuitous violence and pornography, shall be subject to the strictest measures, such as encryption and PIN codes, it said.