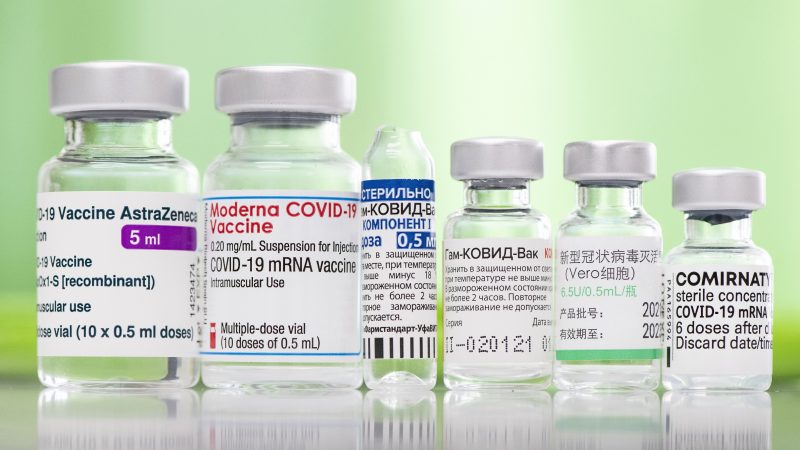 Empty vials that contained the COVID-19 vaccines available in Hungary, such as from AstraZeneca, Moderna, A and B of Sputnik V, Sinopharm, Pfizer-BioNTech, left to right, are seen on a table in a general practitioner's office in Nyiregyhaza, Hungary, 1 April 2021. [Attila Balazs/EPA/EFE]

Hungary will begin gradual easing of coronavirus restrictions within days, the government said on Monday (5 April), as it expects to have 25% of its population of 10 million inoculated by Tuesday or early Wednesday at the latest.

Prime Minister Viktor Orbán, who faces an election in a year, is walking a tightrope between a lockdown to tame the world’s deadliest COVID-19 surge and the need to reopen the economy to avoid a second year of deep recession.

Hungary has had the highest weekly per capita fatalities in the world for several weeks, according to Johns Hopkins University data.

Its health care system has come under extreme stress, the government has said, despite vaccinating a fifth of the population in one of the fastest inoculation drives in Europe.

There were nearly 12,000 coronavirus patients in hospital on Sunday, 1,451 of them on ventilators, the government said on Monday.

But the government has also vaccinated among the most citizens per capita in the European Union and imported the EU’s highest number of vaccine doses per capita, aiding a rapid inoculation drive.

Its statement on Monday said once the 25% mark is cleared, it would shorten a night-time curfew to begin at 10 p.m. instead of 8, and allow all shops to be open until 9:30 p.m. as long as they have at most one customer per 10 square metres (108 square ft) of floor space.

Hotels will stay closed, as will restaurants, except for takeout and delivery.

Schools will reopen in mid-April once teachers are inoculated, the government said.

Doctors’ and teachers’ groups have proposed stricter rules while business associations have lobbied for a measured opening.