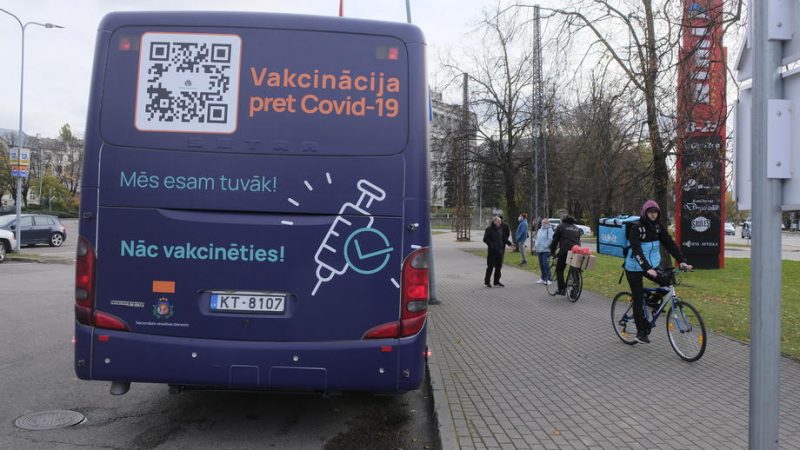 File photo. A coronavirus disease (COVID-19) vaccination bus is seen against in Riga, Latvia, 19 October 2021. Latvian government announced plans to lockdown from 21 October until 15 November due to Covid-19. Strict restrictions are agreed in principle but they are still subject to revision at government meetings. [EPA-EFE/VALDA KALNINA]

Employers in Latvia are allowed to dismiss employees who refuse to get vaccinated against Covid-19 from Monday (15 November), under new rules aimed at taming the pandemic in the EU member state.

Elected politicians without a vaccination certificate or evidence of having recovered from Covid-19 will also be barred from their duties and receive no salary until they get vaccinated.

The ban could include two parliamentarians who are refusing to get inoculated.

In the city council in Rezekne in eastern Latvia, around 30% of councillors are estimated to have no proof of vaccination.

Unvaccinated people will also not be allowed into shopping malls whose size exceeds 1,500 square metres.

The Domina shopping mall in Riga, where the restrictions apply, appeared half-empty compared to a normal Monday.

A security guard was checking every customer coming in.

Unvaccinated employees can now be put on three months of “unpaid involuntary vacation” and then laid off with one month’s salary as compensation if they still refuse to get vaccinated.

But the government said it was also ending a nightly curfew that has confined people to their homes between 8:00pm and 6:00am for the past three weeks.

“We have managed to avoid the looming catastrophe in hospitals… and we are having more success with vaccinations but the battle is far from over,” Health Minister Daniels Pavluts said in a written opinion piece.

“The number of lung infection patients in Latvia’s hospitals is three times higher than the health system is designed for,” he said.

The latest vaccination data shows that around 60 percent of Latvian adults have been fully vaccinated — one of the lowest levels in the European Union.

However, the recent spike in Covid infections as well as increased hospitalisation and death rates, has led to a sharp rise in the vaccination rate in recent weeks.