Latvians take to the water for distanced concerts 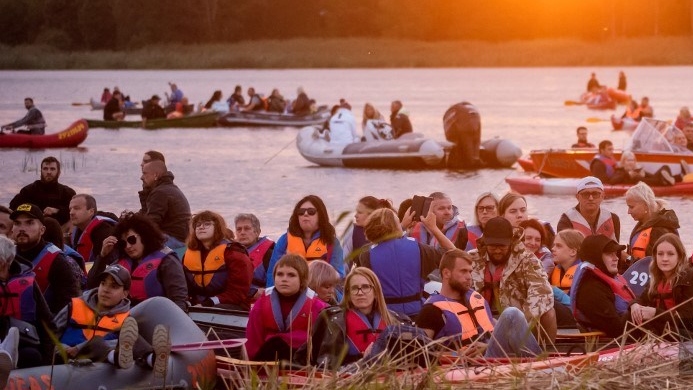 Latvians are taking to the country's waterways for a socially distanced musical experience this summer. [@AFPphoto Twitter]

Latvians are taking to the country’s waterways for a socially distanced musical experience this summer, boarding kayaks, dinghies and motor yachts to enjoy some music — even if unvaccinated.

At a concert on Juglas Lake near the Latvian capital Riga on Saturday, hundreds of boats could be seen bobbing to rock, folk and heavy metal.

“The idea… is so great,” said Vladimirs Kravchenko, a heavy metal fan who has been attending hard rock festivals since the 1990s.

“I hope festivals on lakes like this will continue even after the virus is over,” Kravchenko said.

Organisers said there were around 1,500 people on the water, and 3,500 more watching from the shore.

The stage was located on the shore and two floating bars in the lake sold beer and cocktails.

Only people with Covid-19 vaccinations were allowed to attend the concert on the shore while the lake was also open to those without a vaccine.

“This is simply a brilliant idea for how to hold a festival and ensure social distancing for the unvaccinated at the same time,” Anna Berzina, who was rowing a kayak with her husband, told AFP.

The Baltic state has one of the lowest vaccination rates in the European Union — around 43%.

The government has imposed restrictions for unvaccinated people in a bid to encourage more Latvians to get vaccinated — including threatening soldiers with dismissal if they do not get the jab.

For live events, the rule is that there must be two separate zones for vaccinated and unvaccinated spectators, creating a headache for organisers.

Saturday’s concert was the second in a series designed by Dagamba, a classical and rock music crossover band, which came up with the idea of lake concerts during last year’s lockdowns.

The concerts are called LAIVA — a play on the English word “live” and the Latvian for “on a boat”.

At the concert, the sight of the flotilla in front of him inspired Peteris Kvetkovskis, the frontman of black and folk metal band Skyforger.

“Seeing so many boats in front of us, we will play a song about a Viking raid being launched,” he told the audience from the stage, before launching into the number called “To the Northern Shores”.