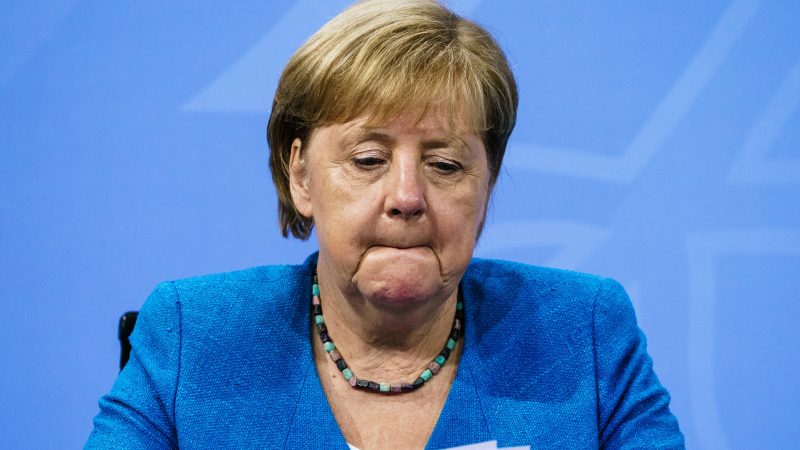 German Chancellor Angela Merkel looks on during a press conference after a virtual meeting with German State Premiers about the current coronavirus situation, at the Chancellery in Berlin, Germany, 10 August 2021. [Pool/EPA/EFE]

Germany’s coronavirus vaccination drive has slowed and those people who have not taken up the opportunity to have shots will have to take COVID-19 tests to take a full part in public life, Chancellor Angela Merkel said on Tuesday (10 August).

To nudge more people to get vaccinated amid concerns about a rise in new cases, Merkel said the government will stop offering free tests from 11 October, except for those for whom vaccination is not recommended, such as children and pregnant women.

The government will also require people to be either vaccinated, test negative or have a recovery certificate to enter indoor restaurants, participate in religious ceremonies and do indoor sport.

Less than seven weeks before a federal election, Merkel and leaders of Germany’s 16 states met to discuss measures to dampen a new spate of infections, driven by the spread of the Delta coronavirus variant, and avert unpopular restrictions.

“The bad news is that the vaccination rate has lost pace substantially,” Merkel told a news conference after the meeting.

“I hope it will pick up pace again after the (summer) holidays,” the conservative leader said, but added: “On vaccinations, we are not where we need to be.”

Germany had made the tests free for all in March to help make a gradual return to normal life possible after months of lockdown. Although around 55% of Germans are fully vaccinated, the pace of inoculations has slowed.

In neighbouring France, vaccinations jumped after President Emmanuel Macron unveiled a plan for citizens to have to show a health pass for many daily activities, although the plan has also triggered mass protests. Coffee and croissant in a French cafe? You'll need a COVID pass for that

The French morning ritual of a coffee and croissant became more complicated as people had to show proof of vaccination or a negative COVID-19 test before taking a seat at their favourite cafe, though numerous eateries ignored the new rules.

Merkel said she would like to see around 75% of Germans fully vaccinated. Bavarian leader Markus Soeder, who joined her at the news conference, warned of a fourth wave of infections.

“What is clear is that this fourth wave is coming, and definitely in the autumn,” said Soeder. “The current infection rates are not sufficient to be carefree.”

The Bavarian premier added that “there won’t be another lockdown – in any case not for double vaccinated people. Why? Because then it is unconstitutional.”

Merkel agreed that so long as the vaccines work, any further restrictions must be different to previous lockdowns.

“We want to and will test more to avoid a new lockdown,” Laschet told the North Rhine-Westphalia state assembly.

Laschet is desperate to avoid new restrictions to avoid handicapping his chances to become chancellor.

The federal government also agreed at Tuesday’s meeting to extend financial assistance to businesses affected by restrictions beyond September, when they are supposed to expire.

Economy Minister Peter Altmaier said the aid would run until the end of the year. “We are thus continuing to stand firmly by our companies and workers,” he said.