New EU travel map to be based on vaccination rates 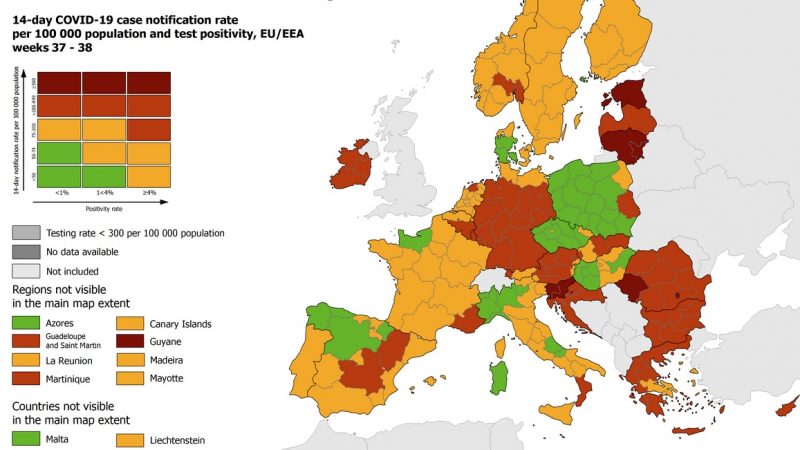 The so-called "traffic light" map of Europe, based on the percentage of positive tests, as per 7 October 2021. [https://reopen.europa.eu/]

The European Union’s public health agency is proposing a revision of COVID-19 rules which could ease travel for vaccinated people and drop a colour-coded system that limits trips to and from areas with high levels of infections.

The European Centre for Disease Prevention and Control (ECDC) made its non-binding proposal at meetings of EU health specialists this week, EU diplomats said, part of a discussion about how to open up travel further as vaccination rates increase.

The ECDC, which has an advisory role, has colour-coded EU regions from green to yellow and red according to their rates of COVID-19 notifications and testing and percentage of positive tests. The EU has broadly tailored travel restrictions according to the colour.

However, in its report the ECDC highlighted weakness of this traffic light system, including different testing systems in EU countries that hindered statistical comparisons. Increased vaccination uptake also needed to be taken into account.

In the current situation, it said, the travel restrictions did not have a significant impact on reducing transmissions, hospitalisations or deaths. Previous measures had also not halted the spread of new variants.

“ECDC proposes to consider discontinuing the use of the combined indicator due to the limited public health value and focus instead on promoting vaccination among travellers,” the agency said in a Powerpoint presentation seen by Reuters.

EU diplomats say the agency was charged by the European Commission to look into the topic. The ECDC presentation says it followed a request from the Commission.

The ECDC gave a number of options for change, including using vaccine uptake as an indicator, which might encourage inoculations. About 74% of EU adults are now fully vaccinated and nearly 80% have received at least one vaccine dose.

The agency did not firmly settle on an option, but said the aim was to assess the risk of a person being infected and that its current system mostly applied to unvaccinated people.

Neither the Commission nor the ECDC immediately replied to requests for comment.