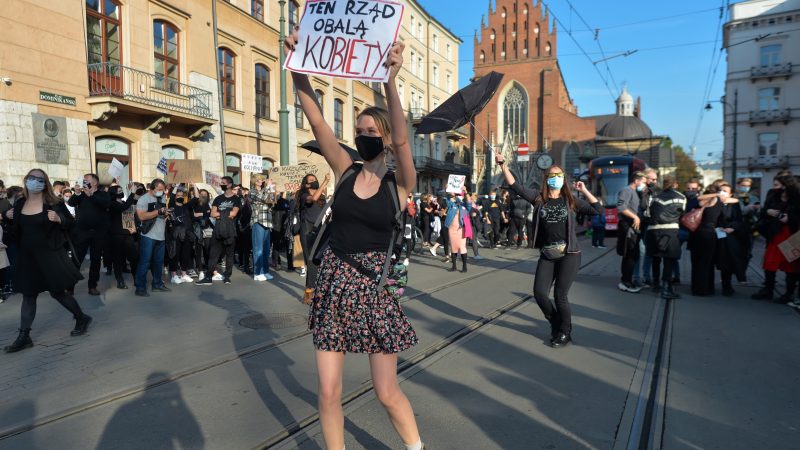 People take part in a protest against the tightening of the abortion law in Krakow, southern Poland, 28 October 2020. [Art Service 2/EPA/EFE]

Tens of thousands of mostly young people have gathered across Poland since a top court ruling last week introduced a near total ban on abortion in the predominantly Catholic nation.

Demonstrations have turned into an outpouring of anger against Morawiecki’s nationalist Law and Justice (PiS) party, with protesters blaming it, and the powerful Roman Catholic Church, for the Constitutional Court’s decision.

Coronavirus infections have been rising sharply in Poland over the past weeks and on Thursday the total number of cases topped 300,000, tripling in under a month. A daily record of more than 20,000 was recorded.

“I am appealing to those protesting. Please focus your anger on me,” Morawiecki told a news conference.

“Issues of worldview are very important but let’s (discuss them) in a way that doesn’t also endanger our mothers and fathers,” Morawiecki said, standing in a field hospital being built in Warsaw’s national stadium.

Thousands gathered again on Thursday evening in Warsaw, Poznan, Sopot and Lodz, among others, footage from private broadcaster TVN showed. Marchers carried rainbow flags and posters that said “PiS off” and “For freedom: ours and yours.”

The majority of protesters have worn face masks since demonstrations started last Thursday but the gatherings contravene pandemic restrictions that limit the number of people allowed to meet to five.

Morawiecki sidestepped questions about whether his government would consider legislation that could soften the impact of the court’s ruling.

The court ruled that abortions due to foetal abnormalities, which make up the vast majority of terminations conducted in Poland legally, were not permissible under the constitution.

After it goes into effect, women will be able to legally terminate a pregnancy only in the case of rape, incest or a threat to their health. Abortion on demand has been illegal in Poland since 1997, when such terminations were banned by another ruling of the Constitutional Court.

Opposition critics say Morawiecki is seeking to deflect blame for a struggling healthcare system, which has begun to buckle under the weight of COVID-19 patients.

“The government is focusing on politics instead of the pandemic. It is fuelling social discontent,” centrist Warsaw Mayor Rafal Trzaskowski told a news conference.

“What I am hoping is that the prime minister take steps for the ruling not to go into effect.”

The government has said it will publish the verdict in its official legal journal, bringing it into force, by 2 November.

“Undoubtedly, this is a key moment for the ruling camp. This is the biggest crisis in five years. It is a test for authorities,” PiS lawmaker Jan Maria Jackowski said.

Doctors say the pandemic will likely accelerate next week following All Saints’ Day on Nov. 1 when millions of Poles traditionally visit cemeteries, and estimate that the number of reported infections is far below the reality.

Morawiecki said the government would discuss any measures related to that on Friday but has so far refused to ban or curtail cemetery visits.

“There are 60 to 80 cars lining up in front of coronavirus drive-through testing centres. The system is completely blocked,” Pawel Grzesiowski, an immunologist, told private broadcaster TVN24.

The education minister said on Thursday universities that have supported abortion rights protests by giving students time off could see their research funding cut.

A mass protest in Warsaw is scheduled for Friday.