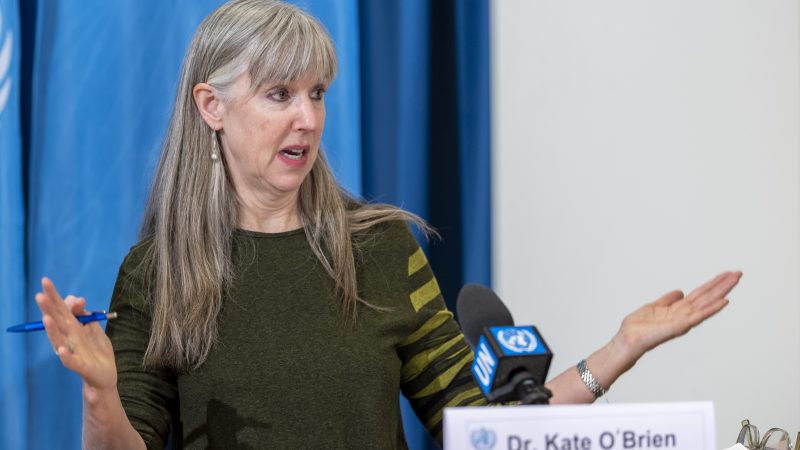 File photo. Kate O'Brien, Director of the Department of Immunization, Vaccines and Biologicals at the WHO speaks about the new global mortality figures for measles for 2018 and update on 2019, during a press conference, at the European headquarters of the United Nations in Geneva, Switzerland, 27 November 2019. [Martial Trezzini/EPA/EFE]

Vaccination is already under way in some of the world’s wealthiest nations, including the United States, Britain, European Union countries and Canada.

Covax, the globally-pooled vaccine procurement and distribution effort, has struck agreements to secure two billion doses — and the first of those will start rolling out within weeks, said the WHO’s head of vaccines, Kate O’Brien.

Covax aims to secure vaccines for 20% of the population in each participating country by the end of the year, with funding covered for the 92 lower- and lower-middle income economies involved in the scheme.

It is co-led by the WHO, the Gavi vaccine alliance and the Coalition for Epidemic Preparedness Innovations (CEPI).

Asked how quickly lower-income African nations would get vaccines, O’Brien told a WHO live social media event: “The facility has access to over two billion doses of vaccine”.

“We will start to deliver those vaccines probably by the end of January, and, if not, certainly by early February and mid-February.

“That’s how countries in Africa and South Asia, and other countries around the world of these 92 that are less able to afford vaccines, are actually going to get vaccines.”

The WHO granted emergency validation to the Pfizer-BioNTech vaccine on 31 December, paving the way for countries worldwide to give swift approval to its import and distribution.

According to the WHO’s overview of candidate vaccines, 63 have been tested on humans, 21 of which reached final-stage mass testing.

A further 172 candidate vaccines are being developed in laboratories with a view to eventual human trials.

“There is a really big pipeline of vaccines that are coming through,” said O’Brien.

“We are in active review of the data on other vaccines and we do expect to be emergency-use listing additional vaccines in the coming weeks and the next months.

“We have 15 manufacturers that have contacted us believing that they have the data that are required to meet these highest standards.”

As for the new mutations of the virus detected in Britain and South Africa, WHO experts have said that while they seem more transmissible, there is no indication that the current vaccines would not work against those variants — and the vaccines are easily adaptable in any case.

“The evaluation about whether the existing vaccines will be impacted at all is under way,” said O’Brien.

However, “the kinds of changes being seen in these variants are not felt to be likely to change the impact”, she added.

O’Brien said it was too early to tell how long protection would last for following vaccination, and the WHO had no data yet to make any recommendations on receiving doses of different vaccines, having fully reviewed only the Pfizer-BioNTech jab.