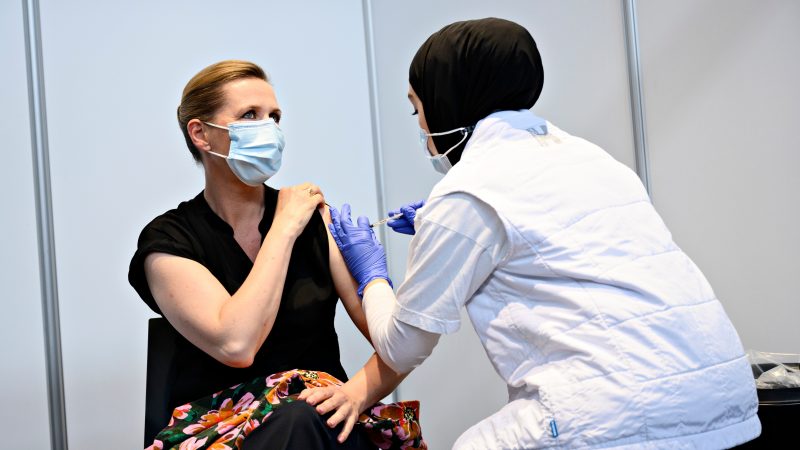 File photo. Danish Prime Minister Mette Frederiksen receives a dose of covid-19 vaccine by vaccinator Huda Beklar in Oksnehallen in Copenhagen, Denmark, 4 June 2021. Denmark is the country with the second highest vaccination rate in the EU as per 31 August 2021. [EPA-EFE/Philip Davali]

Europe may have fully vaccinated almost half of its population against Covid-19, but the richer countries are far outstripping the poorer ones. This disparity, often along West-East lines, has raised concerns from the European Commission and the World Health Organisation.

To date, at least 845.5 million doses have been administered in Europe, an area which includes Russia and Turkey, according to an AFP tally based on official sources on Tuesday (31 August) at 1300 GMT.

That breaks down to 99 doses per 100 of the population.

A little more than half of the European population, or 53.5%, has received at least one dose, while nearly half — 47% — is fully vaccinated.

These statistics make Europe the second most vaccinated area of the world after the United States and Canada, which have administered 115 doses per 100 habitants. It is far ahead of Asia, in third place with its 77 doses.

The world average inoculation rate is 68 doses per 100 inhabitants.

According to the World Bank, 34 European countries out of 51 are considered high income, including the vast majority of the EU’s 27 countries, as well as the United Kingdom, Norway and Switzerland.

These countries have administered an average of 122 doses per 100 inhabitants. Two thirds of their population (66%) have received at least one dose and 60% are fully vaccinated.

The other European countries, all considered middle income by the World Bank, have administerd two times fewer shots — 63 per 100 inhabitants.

On average only 34% of these countries’ inhabitants have received at least one dose, while 27% are fully vaccinated.

The European Union’s health commissioner on Tuesday spoke of a “worrying gap” in the rate of vaccination between member states.

The bloc’s only middle income member Bulgaria, is by far the least vaccinated, with only 17% of its population completely protected.

The country, which has received shots from Brussels, has no shortage of doses, but its people have shown a lack of confidence in vaccines.

Outside the EU, in the least vaccinated European countries, vaccine scepticism goes along with a lack of doses.

The WHO Europe on Monday pointed to “a lack of access to vaccines in some countries and a lack of vaccine acceptance in others”.

Europe’s four least-vaccinated countries are all in the east: Armenia (3% fully vaccinated), Ukraine (9%), Georgia and Bosnia Hercegovina (11% each). They were among the last on the continent to launch their vaccination drives, in February and March.