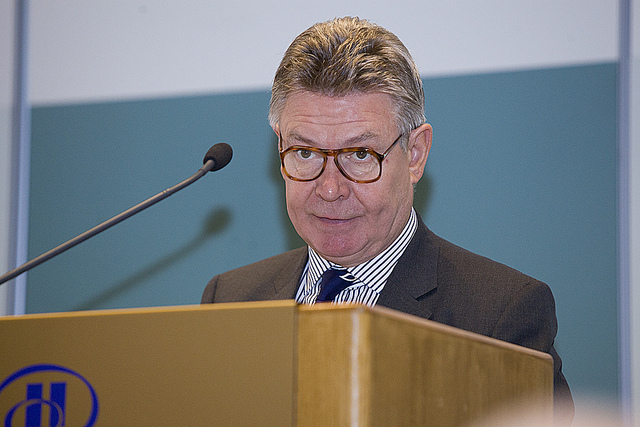 Campaigners have criticised Comissioner de Gucht for ''scoffing'' at their concerns over food safety in TTIP. [Ulkoministeriö/Flickr]

EXCLUSIVE/ The Transatlantic Trade and Investment Partnership (TTIP) will irreversibly put EU consumers and animals at risk, the European Commission will be warned today (28 August).

Civil society organisations will hit back at Commission claims there is ”no contradiction” between TTIP and high food safety and animal welfare standards, citing a leaked Commission negotiating document.

Friends of the Earth Europe, Compassion in World Farming and the Institute for Agriculture and Trade Policy accuse the executive of putting measures to encourage more and faster trade ahead of consumer and livestock safety.

Poor implementation of GMO contamination testing rules in the US, which would be recognised as equivalent to EU rules in TTIP, has already forced countries to enforce import bans against the US.

The leaked draft paper from the TTIP chapter on Sanitary and Phytosanitary measure does stipulate that traded food must be safe to consume. But campaigners argue the EU’s desire to seek the “least trade restrictive measures” will undermine safeguards and put the public at risk.

”Fair, sustainable and safe food could be permanently damaged by the transatlantic trade deal on the table,” the letter says, “we cannot have confidence that the draft measures […] will uphold to the highest standards that protect consumers and animals.”

”EU standards on animal welfare are at a high risk of being significantly lowered with TTIP, and the chance of enacting more standards greatly reduced,” they add.

The letter says relying on leaked documents is not the ideal way to discuss trade policy. ”But until the negotiations process is more transparent, we feel left with a lack of other options,” it says before calling for a meeting with De Gucht.

The EU-US trade talks are dogged by accusations of a lack of transparency. The Commission has said they are the most transparent ever held, pointing to regular publication of some documents on a website and consultations with the European Parliament that goes beyond that required by EU law.

Food safety is one of the most divisive issues in TTIP. Both the Commission and the US ambassador to the EU Anthony Gardner have accused NGOs of ”spreading misinformation” over Twitter and Facebook.

The Belgian commissioner said in May, ”You have the campaigns by the social media, groups using the social media, a number of NGOs spreading sometimes, I would say, complete lies, for example on hormone meat”.

Campaigners were furious with De Gucht for accusing NGOs of ”scaremongering” over food safety.

Mute Schimpf, food campaigner for Friends of the Earth Europe said, ”The concerns of European citizens that the free trade agreement with the USA would undermine public safeguards were scoffed at by the Commissioner in charge of the negotiations. Now leaked documents show that the public has every right to be concerned.”

The letter raises fears that big business is having too much influence over the talks. It demands, ”a trade policy that reflects the needs of the public it impacts rather than the wishes of the corporations seeking to profit from it”.

Race to the bottom

The letter was sent as the Commission this week reacted angrily to a Greens in the European Parliament and European Free Alliance video that attacked TTIP as a deal that would spur ”a race to the bottom” in food and animal safety standards.

The animated online film claimed TTIP will lead to both EU and US consumers getting ”screwed” before urging views to show big business ”the finger” by sharing the video.

An EU trade spokeswoman said, ”We have seen the video clip and do neither approve of its content or its style.  The allegation that regulatory coherence will trigger a race to the bottom is simply false.”

”Commissioner De Gucht has repeated many times that EU standards will not be lowered.  There will be no hormone-beef in Europe and we will not change the way we legislate GMOs,” the spokeswoman said.

TTIP is about improving the trade environment rather than lowering EU or US standards, she said. It’s about finding ways of removing unnecessary red tape, such as double inspections on both sides of the Atlantic, she added.

EU-US cooperation on barriers to trade already takes place in the World Trade Organisation and Transatlantic Economic Council. ”None of these lines of regulatory cooperation has ever led to the consequences put on the wall by this video,” the spokeswoman said.