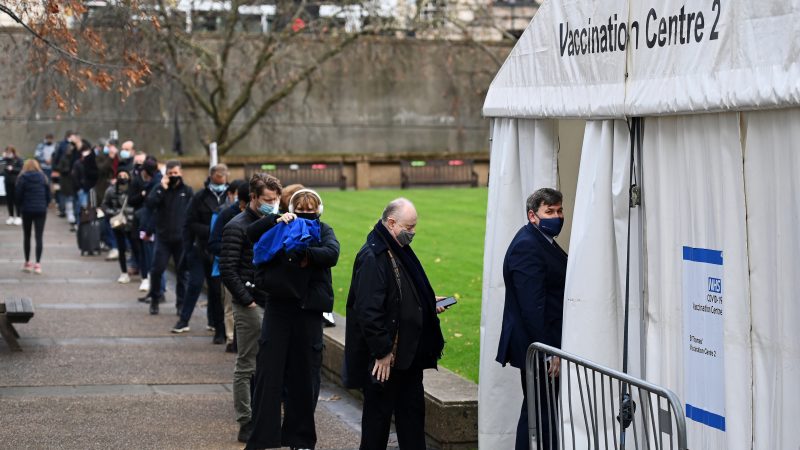 People queue up at St.Thomas's hospital for Covid-19 booster jabs in London, Britain, 13 December 2021. The UK government has warned the public that the country is facing a 'tidal wave' of Omicron infections. The UK Covid-19 booster rollout is to increase to some one million people a day to fight an Omicron 'tidal wave'. [EPA-EFE/ANDY RAIN]

Britain on Monday (13 December) confirmed what is thought to be the first confirmed death after infection with the Omicron variant, as the country launched an ambitious Covid booster shot programme to stop the virus spiralling out of control.

On a visit to a vaccination centre in west London, Prime Minister Boris Johnson said Omicron accounted for about 40% of the cases in the British capital, and could become the dominant variant in London in the next 48 hours.

Omicron now represents over 20% of Covid cases in England, health secretary says, and is set to become dominant variant in London in next 48 hours https://t.co/y72UCRi5Xh

“Sadly, at least one patient has been confirmed to have died with Omicron,” he told reporters, a day after warning that the country faces a “tidal wave” of infection.

The European Centre for Disease Prevention and Control (ECDC) told AFP: “It appears indeed that this is the first confirmed Omicron death.”

But the centre said many cases around the world were not genome-sequenced, so it was “impossible to know whether this is the first Omicron death”.

In South Africa, where the virus mutation was first identified, no deaths linked to Omicron have been officially announced, the department of health said.

Britain — one of the worst-hit countries with 146,000 Covid deaths since last year — on Sunday sounded the alarm because of high levels and rising rates of transmission.

Johnson said in a rare televised address that emergency measures were needed to prevent hospitals becoming overwhelmed in the weeks ahead.

All adults can now receive a third Covid vaccine by the end of December — a month earlier than a previous government deadline.

Long queues were seen at London clinics. At one, Sarah Jackson, 29, said she had taken the morning off to get a jab before visiting her grandparents at Christmas.

“I don’t know if it’s going to be enough. I was told there is a queue of two hours to register and then two hours to get vaccinated,” she told AFP.

The “turbocharged” booster programme has seen 750 armed forces personnel drafted in to set up extra vaccination centres to be run around the clock by medics and volunteers.

Downing Street said booster doses would even be given on Christmas Day.

Some 500,000 booster jabs were administered on Saturday but to hit the new deadline that number will have to be doubled to a million per day for the remainder of the year to slow the spread.

Concerns have mounted about a new wave because of indications that two jabs are less effective against infection than three.

Vaccination rates are high in Britain, with more than 81% or 46.7 million of those aged 12 and over having had a second jab.

The new measures come after face masks were made compulsory in indoor public spaces last Friday, and new testing and self-isolation rules for contact cases began on Monday.

Workers were also told to stay at home, leading to a drastic reduction in cars on the road and passengers on public transport, travel and transport firms said.

Vaccine passports for certain crowded settings, including at football grounds, are due to be enforced across England from Wednesday, with separate rules set by the devolved governments in Scotland, Wales and Northern Ireland.

Johnson is seeking to refocus attention on the pandemic, after a torrid week in which he and staff were accused of breaking Covid rules last year.

Claims of illegal Christmas parties at Downing Street and across government departments have been seen as undermining public health messaging.

The prime minister faces a large rebellion from within his Conservative party ranks at votes in parliament to make the new rules law on Tuesday.