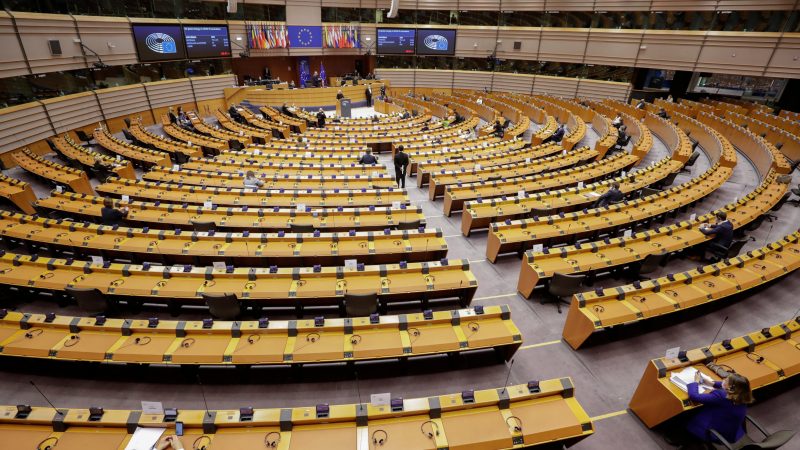 General view of hemicycle during a debate on EU strategy on EU strategy on COVID-19 vaccinations during plenary session of the European Parliament in Brussels, Belgium, 19 January 2021. [Olivier Hoslet/EPA/EFE]

The European Commission said Monday (1 February) the shortfall in deliveries from Anglo-Swedish firm AstraZeneca had forced it to recalibrate its early coronavirus vaccination strategy.

The head of the Commission’s health directorate, Sandra Gallina, told MEPs the firm has been able to guarantee just 25% of the more than 100 million doses promised and that this was “a real issue” for the EU’s 27 countries.

“AstraZeneca was going to be the mass vaccine for quarter one,” she said, referring to the first three months of 2021.

“The fact that AstraZeneca is not there in the quantities that were stipulated in the contract is quite problematic for all member states.”

Gallina added that the Commission was now looking to the vaccines made by BioNTech/Pfizer and Johnson & Johnson to fill the gap.

“There will be many more quantities in quarter two because there will be a new contract that will spring into action.

“So we will not have only BioNTech and Moderna but we will have BioNTech with a new contract, so it’s double the quantities.”

"I have full confidence that they will deliver according to schedule because I must stress they have committed to that." @SandraGallina discussed w/ @EP_Budgets on how the EU budget has been used to support the Covid-19 vaccine strategy.

Her comments highlighted the tension between AstraZeneca and Brussels since the company unexpectedly announced on 22 January that it would not meet its scheduled deliveries.

The company’s CEO has asserted that AstraZeneca only promised “best efforts” to meet its contract.

But Gallina said this caveat did not apply to producing and storing doses in the period before the vaccine was authorised on Friday.

“The schedules are fully binding when it comes to the vaccine order form between the member state and the company. So I don’t see much of your best efforts there,” she said.

She hinted at EU suspicions that AstraZeneca had funnelled some of its production meant for the bloc to Britain, with which it had a separate supply contract, stressing that “audits” were under way.

Gallina noted that under the EU contracts with vaccine-makers, “we have an ability either to receive the materials back or to receive… the amounts that we have paid”.

The European Commission has allocated €336 million to AstraZeneca, though not all of that has been paid as part of it is contingent on delivery.

She noted that the new mRNA technology used in the BioNTech/Pfizer vaccine and a similar one by Moderna had shown “impressive” efficacy levels of over 90% in immunising against Covid.

AstraZeneca, which uses the adenovirus technique, has 60% efficacy, according to clinical data parsed by the European Medicines Agency.

Gallina said production of the BioNTech/Pfizer doses could be ramped up using other pharmaceutical companies’ facilities, for instance ones offered by French company Sanofi, whose own vaccine bid has hit obstacles.

“Manufacturing is really the moment when we have a problem of constraint for the vaccines,” Gallina said.