The WHO hopes to stop the spread of measles in 2015. [Shutterstock]

This week is the World Health Organisation’s 10th annual European Immunisation Week. Running from 20-25 April, the annual event aims to raise awareness of the importance of vaccination in the EU. EURACTIV France reports.

200 countries have taken part in the World Health Organisation (WHO) initiative every year since 2005.

This year’s event is focusing on encouraging people to keep their vaccinations up to date.

The authority behind the French Immunisation Week, the National Institute for Prevention and Education for Health (INPES), says this is an opportunity everyone to check their vaccination certificates and make sure they are up to date. For the WHO, the goal is “to increase vaccination coverage by raising awareness of the importance of immunisation amongst parents and caregivers, health care professionals, policy and decision-makers, and the media”.

INPES has tracked a significant rise in support for vaccination in France over the last 15 years. Although parents tend to have their children vaccinated, they often neglect their own vaccination certificates.

>> Read: Distrust of vaccinations on the rise across EU

In its European Vaccine Action Plan 2015-2020, the WHO establishes 6 objectives for the complete eradication of preventable diseases. One of these objectives is to interrupt the endemic transmission of measles and rubella in 2015. The WHO says the eradication of these two diseases will depend heavily on the involvement of European governments.

Measles is a serious and extremely contagious disease. But thanks to extensive vaccination, the number of cases plummeted by 98% between 1998 and 2007, according to WHO statistics. In 2012, measles started to re-establish itself in unvaccinated populations in Eastern Europe, and between early 2014 and February 2015, the WHO reported 22,149 cases. 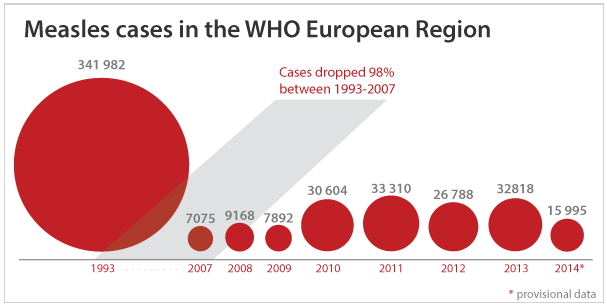 Cases of Measles in the European region

There are several possible reasons for this upsurge, including fear surrounding the possible side effects of vaccines, and questions over their effectiveness and a lack of follow-up treatment after the initial vaccination. According to INPES, 19% of French 15-25 year-olds do not think their vaccinations are up to date.

The Luxembourg government has stated that 3,616 cases of measles were declared in the EU in 2014, over 58% of which occurred in Germany and Italy.

In Germany, where no vaccination is compulsory, an 18 month-old child died of measles in February this year. One in five cases of this disease can lead to serious complications, and the German authorities are pushing doctors to highlight the fact that side-effects from the vaccine are far rarer than complications from contracting the disease, which can include pneumonia, permanent deafness and even death.

To vaccinate or not to vaccinate: What are the dangers?

Governments across the EU are using this week to call on their citizens to ensure their vaccinations are up to date, and to encourage parents to vaccinate their children.

“Vaccination is an act of solidarity and citizenship. Every one of us has a public health responsibility. Every one of us is a link in the transmission chain. To be vaccinated is to protect oneself, but it is also to protect others, particularly the most vulnerable,” said Marisol Touraine, the French health minister.

MEP and Vice-President of the European Parliament’s Green Group Michèle Rivasi does not share her opinion. In a press release on 20 April she expressed her concern over an amendment to health legislation allowing children to be vaccinated from the age of 15 without the consent of their parents, which she fears could be especially dangerous for girls receiving the Gardasil vaccine against the papillomavirus.

“In light of the increasing number of deaths and cases of serious neurological side effects from Gardasil, we are heading towards a new health scandal,” the MEP said.

So who is right? Even doctors are divided over whether or not to recommend certain vaccinations, according to a report published by the French research and statistics body DREES. Only 45% of the GPs questioned recommend the papillomavirus vaccine to young girls between 11 and 14.