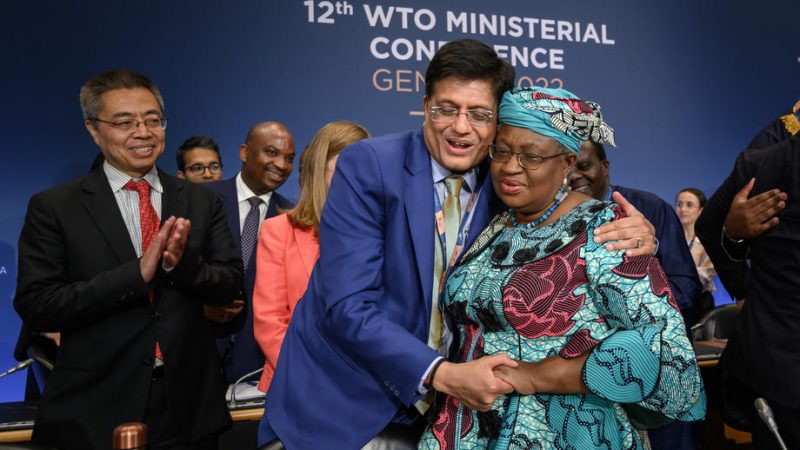 Members of the World Trade Organisation (WTO) on Friday (17 June) reached an agreement to waive certain parts of the WTO Agreement on Trade-Related Aspects of Intellectual Property Rights (TRIPS), though the deal has been criticised by both pharmaceutical firms and civil society groups.

The talks dragged on until 5am on Friday morning, as the WTO’s Director General Ngozi Okonjo-Iweala insisted on a deal that was “important for the credibility of the multilateral trading system.”

The European Commission had previously praised the document emerging from the Quad negotiations – forming the basis of the final WTO agreement – as “the most promising path.” In a statement on Friday, the EU executive said that the agreement allows “for the swift manufacture and export of COVID-19 vaccines without the consent of the patent owner.”

“At the same time, the agreement maintains a functioning intellectual property [IP] framework with incentives for investment, research and transfer of technology,” the statement added.

The EU Council has welcomed the agreement.

Criticisms of the deal

Compared to the waiver initially proposed in October 2020 by India and South Africa, the final agreement was watered down heavily.

The International Federation of Pharmaceutical Manufacturers and Associations (IFPMA) expressed “deep disappointment with the decision on waiving intellectual property rights” which, they said, “sends a dangerous signal not only to the pharmaceutical industry but to all innovative sectors” and would dismantle “the very framework that has brought solutions to tackle COVID-19.”

In contrast, the People’s Vaccine Alliance, accused the EU, United States, UK and Switzerland, of blocking a “meaningful IP waiver”.

Countries had been under pressure to entirely reject the draft text for its perceived lack of ambition, while pharmaceutical companies also urged for it to be rejected, arguing that trade barriers and distribution problems, rather than IP, stood in the way of global access to COVID-19 products.

The agreement only applies to vaccine production and requires WTO members to decide on an extension to cover treatments and therapeutics after six months. It will apply for five years.

The footnote on eligibility and which countries could be included based on the amount of vaccines they have exported, has been dropped, a key point of dispute between the US and China. 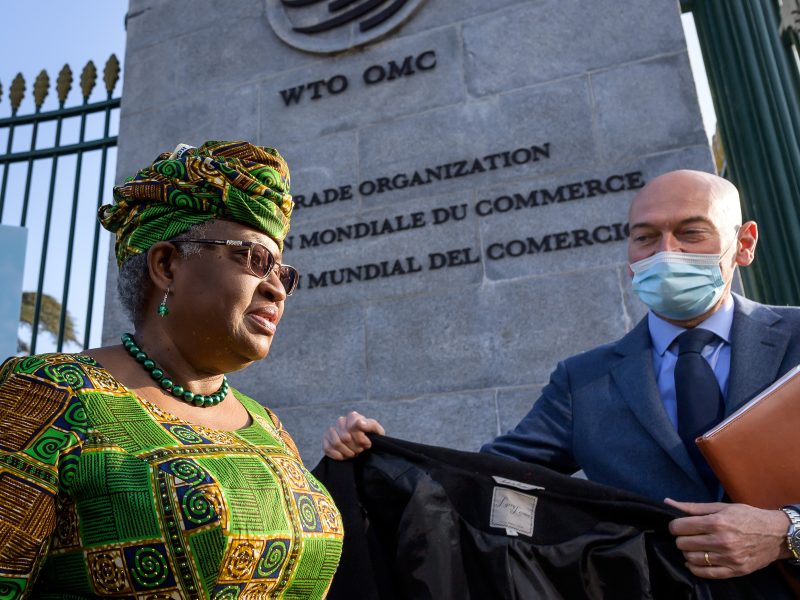 Even with a TRIPS waiver, outcomes are still uncertain

An agreement at the World Trade Organisation (WTO) on a waiver of intellectual property (IP) rights on COVID-19 vaccines and treatments would not have an automatic effect as governments would still need to work on its implementation, says a WTO official.

Unhappiness from opposite sides

“I think that the pharma unhappiness with this text is all an act. I think that the rich countries are actually doing pharmaceutical companies’ bidding for them,” Anna Marriot, policy lead at the People’s Vaccine Alliance, told EURACTIV while negotiations were still ongoing in Geneva.

Thomas Cueni, director general at the International Federation of Pharmaceutical Manufacturers and Associations (IFPMA), told EURACTIV: “The argument is as devoid of common sense as the proposed waiver has been: if countries had been doing industry’s bidding, then we would not be where we are today,” referring to companies’ not-for-profit pricing and criticism of rich countries’ unwillingness to share doses and remove trade barriers.

Following the final agreement, the French minister delegate for the Minister of European and Foreign Affairs, Franck Riester, called the WTO agreement “excellent news” in a press release  on Friday morning.

Riester added that the deal “relaxes the conditions for using intellectual property to access vaccines. In addition, there is a declaration in which WTO members commit to facilitating trade in essential medical goods, particularly with a view to preventing future pandemics”. 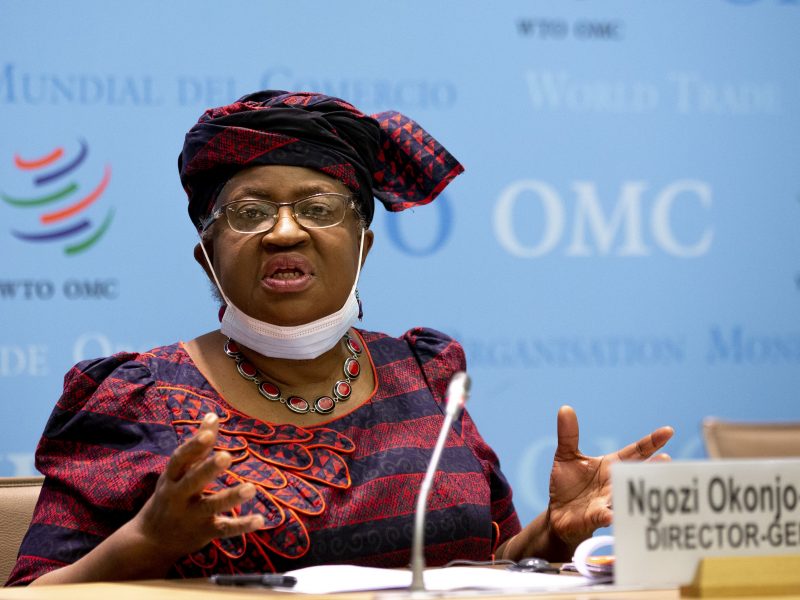 News of a provisional compromise to waive intellectual property rights for COVID-19 vaccines between the EU, USA, India and South Africa in the World Trade Organisation (WTO), leaves out treatments for COVID-19.

Cueni contended that since there is a global surplus of COVID-19 vaccines, the focus should be on getting people vaccinated.

“It’s really a solution looking for the problem. Even if it was done earlier, it would never have added a single vaccine to capacity for the simple reason that it is not possible to produce a vaccine solely from the patent. The proposal paper is pure political showmanship,” Cueni told EURACTIV prior to the deal, adding that the negotiating text was “unnecessary and harmful to innovation.”

Industry sees voluntary agreements between companies as the only way to secure that production is spread out, he added, explaining that is only this way that they could ensure the inclusion of know-how, staff training and other necessary elements for the production of vaccines.

This is why, he argued, many companies who said they could produce generic versions of the patented vaccines will still not have the resources. And that voluntary agreements would ensure proper collaboration instead of forcing the release of patents making the rules on IP unclear for pharmaceutical companies.

“The analogy which I see is that somebody breaks into your house, steals your computer and then realises they need your password. Then they come back and say: since I stole your computer would you be kind enough to give me your passwords, because otherwise it’s not of much use. Your willingness to share that with the burglar is probably limited,” Cueni said.

According to IFPMA there are over 300 voluntary partnerships, though not all have been successful because of “the environment, policies and lack of skilled labour in the region.” Instead, they point to India’s vaccine export ban and the US Defense Production Act hampering production scale-up as reasons for shortages in 2021.

Marriot from the People’s Vaccine Alliance is not convinced of the voluntary agreements.

“Pharmaceutical corporations have had every opportunity to enter into those relationships and demonstrate that there is commitment to diversify suppliers so that every country has timely access, yet they haven’t taken that action,” she said, referencing the World Health Organisation’s director-general Tedros Ghebreyesus, who said that the WHO Covid Technology Access Pool (C-TAP) had only received few licenses, and none of them are from manufacturers.

Marriot said that a waiver like the one originally put forth in 2020 would have opened up “trade secrets” including know-how for production. It would then also remove legal barriers.

“Of course, we have also always been calling for pharmaceutical corporations to cooperate in this process and to transfer their technology and know-how to accelerate the process. I would say that the proof that this is possible lies with the mRNA hub in South Africa,” she added.

Cueni, in contrast, argued that while it has been possible to find partners that meet the high criteria for technology transfer and scale-up ability, the process is not always that straightforward.

“Even with such screening, the process of vaccine manufacturing is highly complex and needs to meet a very high threshold of quality. To the extent that even very seasoned vaccine contracting producers were found to produce vaccines which did not meet the regulatory high standards,” he said. 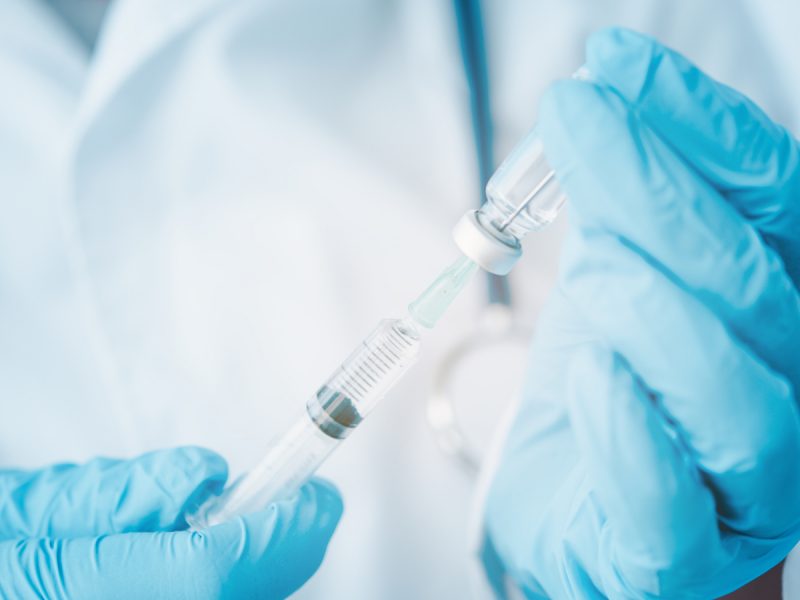 A broad international platform of activists, unions and experts has urged India and South Africa to reject the leaked compromise on intellectual property rights on COVID-19 vaccines, which the European Commission considers the ‘most promising path’ to sort out the issue.

Where to go from now

The COVID-19 pandemic is far from over, and warnings persist of a new wave with a new variant later this year. New vaccines are currently being produced that can be adapted to emerging variants.

These vaccines should reach low- and middle-income countries at the same time as wealthy nations get access, said Marriot, adding that this is why the original waiver proposal from 2020 could still have made sense today.

Since that did not happen, she says that wealthy countries must now “pledge to never use the dispute mechanisms that are built into the WTO or other trade and investment agreements to prevent countries from producing, sharing, or distributing medical tools.”

“Governments must use every means necessary to save lives. And we hope that developing countries will now take bolder action to exercise their rights to override vaccine intellectual property rules and, if necessary, circumvent them to save lives,” Marriot said.

Cueni emphasised: “We need to have a social contract that addresses how equitable access could be done in the next pandemic,” adding that low-income countries will need a pandemic preparedness fund and a COVAX 2.0 in order to “get into the play early on and not have to wait until everybody else is served.”