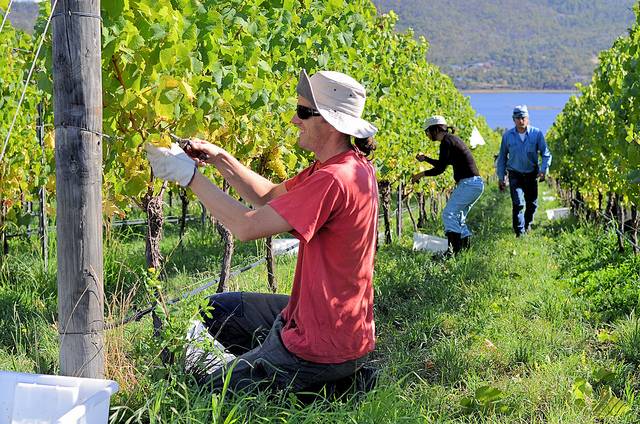 Outdoor workers are twice as likely to develop skin cancer as the rest of the population. [Stefano Lubiana/Flickr]

Prof. Dr. Swen Malte John is a professor of dermatology at the University of Osnabrueck and chair of the Media and PR Committee of the European Academy of Dermatology and Venereology (EADV). Nikos Manaras is the Senior EU affairs and media coordinator of the EADV.

Between two and three million people are diagnosed around the globe each year with non-melanoma skin cancer (NMSC). Exposure to UV solar radiation, classified by the World Health Organisation as a group 1 carcinogen (alongside substances such as plutonium and asbestos), is the leading cause of NMSC worldwide. With an average annual increase of 3-8% in fair-skinned populations in Australia, Europe and North America over the last 30 years, NMSC is the most common form of cancer. It is also one of the few curable types of cancer if detected early enough. Yet, incidences of NMSC, according to all expert prognoses, are set to keep increasing.

While a clear association between solar exposure and recreational outdoor activities has been established, it is only quite recently that research has focused on the long-term impact of UV exposure in outdoor workers. Recent studies show that outdoor workers have at least double the risk of developing NMSC compared to the general population.

But in Europe, the invisible risk of UV exposure is broadly neglected. Affected workers go unnoticed, un(der-)reported, unscreened, uncared for (at an early stage) and uncompensated. Therefore, activities to raise sun safety awareness and further in-depth research to establish the extent and impact of exposure to UV radiation during working hours are just as important as convincing policy-makers to take action. At the same time, better health education, dermatological screening and early care are also vital in protecting outdoor workers from NMSC.

Effective awareness-raising initiatives, including on sun safety behaviour, have primarily targeted the general population: how to correctly use sunscreen, how to protect oneself from the sun with adequate clothing (such as hats and long-sleeved shirts) and when to go into the shade during peak hours for UV radiation (from 11am to 3pm). With a workforce of over 14.5 million spending at least 75% of their working hours outdoors in Europe alone, attention to occupational UV-induced skin cancer has been surprisingly low for a long time.

This is the time to act to protect our outdoor workers, but also to limit the rapidly growing financial burden on healthcare systems.  NMSC is ranked among the five costliest cancers in many European countries. In Germany, direct costs for in-patient treatment accounts for over € 130 million per year. In the UK, more than £110 million (€140 million) are spent every year on skin cancer treatment. The potential economic benefits of skin cancer prevention are great and include not only a reduction of costs, but also gains in quality of life, work productivity, functional ability and health.

Although a limited number of countries include UV-induced skin cancer in their national lists of occupational diseases, affected workers generally do not derive any benefit from this recognition. This is due to a lack of notification, unawareness, or fear of losing their job. This is another reason why official statistics greatly underestimate this significant public health threat in most EU member states.

Over the past few months, the European Commission has been reviewing the 24 health and safety Directives. Under this review, we ask that the Commission revises the 2006 Directive on Artificial Optical Radiation to include solar UV radiation within its scope. This Directive currently only defines limits for exposure of workers to artificial optical radiation to the eyes and skin and completely excludes the continuous exposure of workers to natural UV radiation. This will pave the way to recognising NMSC as an occupational disease for outdoor workers and improve the legislative framework that protects European workers from occupational threats.

The question therefore is whether, in line with the available evidence delivered by research, EU policy-makers will act accordingly. Indeed, the fact that many EU member states still fail to translate this evidence into adequate prevention strategies and legislative protection for outdoor workers remains incomprehensible. Unfortunately, for now at least, solar UV radiation remains European outdoor worker’s number one enemy.