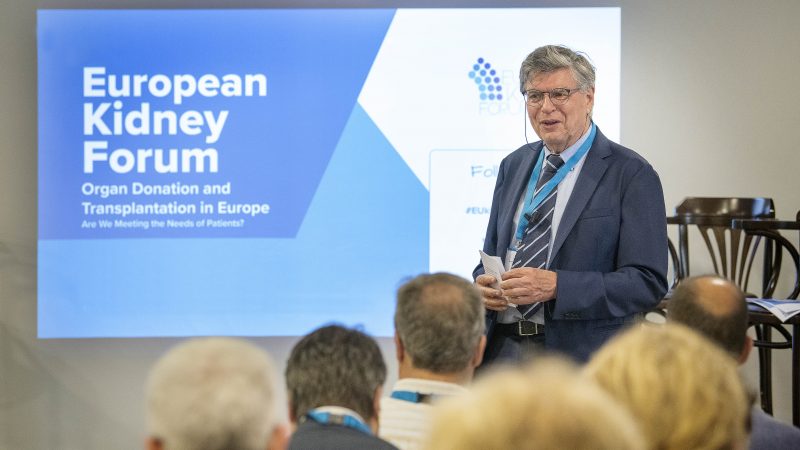 More than 30% of European adults suffer from chronic disease (heart failure, cardiovascular disease, liver cirrhosis, chronic kidney disease, diabetes mellitus, among others) and more than 85% die from it.

Professor Raymond Vanholder is the President of the European Kidney Health Alliance (EKHA).

The general perception is that chronic diseases are a problem of the older population, but 45% of patients who die from chronic diseases are actually below 60 years of age. Once these disorders reach their final stage, loss of life can, in most cases, only be avoided by offering transplantation of a well-functioning organ from a living or deceased donor.

In the EU, up to 16 patients die every day waiting for a transplant, and while some countries  (such as Spain and Croatia) have seen encouraging increases in organ donation, in others transplantation rates have been stagnating or even decreasing. By the end of 2018, more than 110,000 EU citizens were on organ waiting lists, and this figure is a 7% increase vis-à-vis 2014. Today on World Kidney Day, the European Kidney Health Alliance calls on policymakers to put organ donation and transplantation high on their agenda. Much more needs to be done if we are to alleviate the human, social and economic burden of end-stage kidney disease as well as other chronic diseases for which the only hope of survival is organ transplantation.

The most frequently transplanted organs in Europe are (in rank order) kidney, liver, heart and lung. The only two alternative options at an advanced stage of the disease are conservative treatment, which only assures (limited) comfort or artificial organ treatment. However, the latter option is only available on a large scale for kidney failure (dialysis).

Transplantation is life-saving. This is obvious for those organs where no alternative is available (liver, heart, lung) and where transplantation is a question of life or death; but it is also the case for kidney failure, for which dialysis exists as an alternative. Expected average remaining lifetime for a 50-year-old kidney transplant recipient is more than twice as long as that of a patient who remains on dialysis. In addition, quality of life, self-esteem and satisfaction are significantly improved among transplant recipients, while the cost is decreased. One year after transplantation, costs to healthcare systems are 90% lower than for dialysis, which is an expensive therapy (up to 80,000 € per patient per year, depending on the country). Finally, transplantation offers the possibility for patients to retain, or indeed return to economic activity, as it removes the medical obstacles for unemployment, thus increasing purchasing power and social integration.

Patients with severe chronic disease take multiple medications, are limited in their activities and social life, suffer from multiple, often debilitating symptoms, and spend much time in hospital and for their treatment. These handicaps are significantly reduced by transplantation.

A call for concerted action to address shortcomings in organ donation and transplantation in Europe: The EU Thematic Network and Joint Statement

The number of donors per year in EU countries ranges from more than 50 per million people for the highest-scoring country to less than 5 per million people for the lowest. These major disparities also exist for almost every other aspect of organ donation and transplantation from a number of people with a functioning graft to living and deceased donation to donation after cardiac death.

To better streamline future transplant activity in the EU, the European Commission assigned a group of European stakeholders in the field to develop a Thematic Network and to draft a Joint Statement on how to improve donation and transplantation activity throughout the EU. This Joint Statement was led by the European Kidney Health Alliance, and produced in close collaboration with European Society for Organ Transplantation (ESOT), learned societies of frequently transplanted organs (kidney and liver) and national competent authorities for organ donation and transplantation (Spain, Croatia and the Netherlands). Furthermore,  it was endorsed by 54 organizations and 19 individual Members of the European Parliament (MEPs), demonstrating the widely recognised relevance and timeliness of this document.

Together with 8 policy calls and corresponding recommendations to be actioned at national, EU and stakeholder levels, the Joint Statement sets out 14 key measures needed to increase transplantation rates and improve post-transplant outcomes. A central point is the need to optimally organize donor coordination and intensive care procedures for donor selection because this impacts not only the number of donations but also organ quality and thus, the chances that function is maintained in the long term.

Contributing stakeholders also put great emphasis on the importance of education and information, not only for patients but also for medical professionals (directly involved in transplantation or not), students, and the general public, with special attention to minorities and health-illiterate people who may need specific approaches. For greater impact, these efforts should make use of traditional as well as new media.

Additionally, while countries can learn a lot from each other, structured approaches that cluster countries according to their common characteristics may be most effective in finding lasting solutions. Other key takeaways from the Joint Statement include the need to systematically address inequities in access to transplantation (which may be due to race, gender, citizenship status or socioeconomic factors among others); increase the availability and quality of data by appropriate registration and encourage benchmarking of transplant activities; provide appropriate legal and institutional frameworks; ensure sufficient funding of transplant activities, and stimulate transplant research, which involves not only innovative therapeutic approaches but also patients’ quality of life, social aspects and health economics.

It is the sincere hope of all involved stakeholders that the Joint Statement will help generate renewed political momentum and policy action on improving donation and transplantation activities throughout the EU, and prompt a second EU action plan building on the success and experiences of the previous initiative.

The full text of the Joint Statement on Improving Organ Donation and Transplantation in the EU can be accessed here.