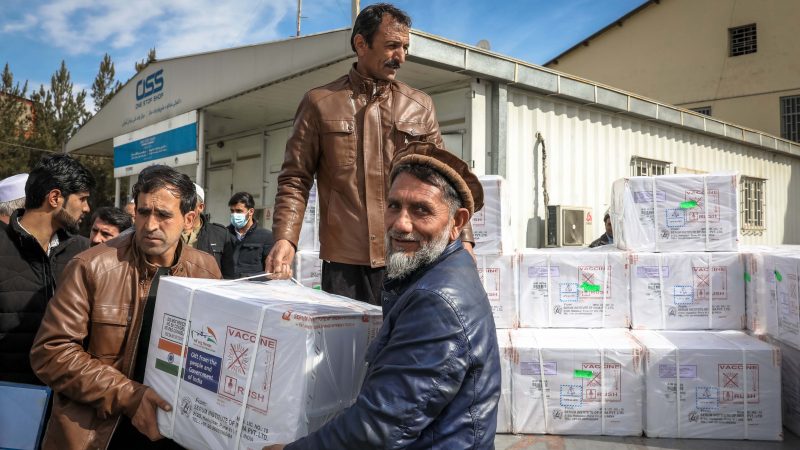 Afghan health workers unload the first shipment boxes of Covid-19 coronavirus vaccine donated by the Indian government, at the Kabul airport on 7 February 2021. Afghanistan received 500,000 doses of AstraZeneca COVID-19 vaccine from India on 7 February, the first to arrive in the country. [Hedayatullah Amid/EPA/EFE]

While Western vaccine nationalism condemns the world to a lose-lose situation, India, the pharmacy of the developing world, has clearly the potential to come to the rescue, writes Gauri Khandekar.

Gauri Khandekar is a researcher at the Brussels School of Governance, Vrije Universiteit Brussel.

As the worldwide COVID-19 death toll hit more than 2.3 million people, western vaccine nationalism has emerged as the largest impediment to global efforts at overcoming the Covid-19 crisis.

Rich western countries (the European Union (EU), UK and US) along with Japan have not only hoarded the most effective vaccines in quantities up to four times their populations or 4.2 billion doses in total (so far, all of Moderna’s doses and 90% of Pfizer/BioNTech’s), but are also blocking countries like India and South Africa from producing the same COVID-19 vaccines and drugs indigenously to meet global demand.

The IP waiver would allow drug makers in these countries to mass-produce COVID 19 vaccines inexpensively for timely and affordable access.

Nearly twenty years ago, the Doha Agreement on Trade Related Aspects of Intellectual Property (TRIPS) declaration allowed similarly demanded flexibilities to facilitate access to medicines during the HIV/AIDS global epidemic. It is worth mentioning that Moderna has already waived its (mRNA) vaccines and therapeutics patent rights during the pandemic period.

However, the proposal, to be used as an extreme measure, has been fiercely opposed by the EU, UK, and US, who claim that such a waiver would stifle innovation in pharma companies by robbing them of incentives to invest in R&D.

In the meantime, poor countries continue to struggle to access vaccines. Amidst the recent vaccine row between the EU and UK over AstraZeneca’s vaccine supply, EU Commission official Martin Selmayr infamously celebrated the EU outstripping vaccination rates of nearly 12 million people in three weeks compared to the 20,000 people vaccinated in Africa, and the 128 countries who had not even started vaccinating.

Indeed, the rollout in Africa has been particularly paltry. As of 3 February, only four African countries have begun vaccinating their populations: Seychelles, Morocco, Algeria and Egypt. Seychelles secured China’s Sinopham vaccine, Mauritius received a 100,000-dose donation of the Oxford/AstraZeneca vaccines from India, while Guinea received all but 55 doses of Russia’s Sputnik vaccine for a population of more than 12 million.

The WTO led donor-funded COVID-19 Vaccine Global Access (COVAX) facility aims to distribute 2 billion doses to 92 poorer subscribing countries, but only by the end of 2021. Estimates suggest it could take up to seven years to vaccinate three-fourths of the world’s estimated 7.8 billion people.

As the global south grapples with the challenges of accessing Covid 19 supplies, India can play a crucial role in delivering the urgently needed vaccines given its large, well-developed existing infrastructure and supply chains. Due to its sizeable generic drugs industry, India has been dubbed the pharmacy of the developing world.

For instance, India has managed to successfully bring down HIV treatment costs in Africa from $10,000 in the 1990s to less than $100 today. India is already the world’s largest vaccine producer.

The privately-owned Serum Institute of India (SII) alone produces the majority of the world’s vaccines by volume. India is currently manufacturing two vaccines — SII is producing the AstraZeneca-Oxford vaccine known in India as Covishield, 70 to 80 million Covishield doses are already manufactured and stocked. while another Indian pharmaceutical firm Bharat Biotech is developing Covaxin.

Three more Indian companies will soon issue their own vaccines. The IP waiver would allow more Indian pharmaceutical firms (and all the manufacturers around the world) to mass-produce the most effective vaccines at very low costs without the fear of being sued or prosecuted.

While western countries have sought to vaccinate their own populations first, India has begun donating vaccines globally just four days after it began inoculating its own population. India has so far supplied millions of COVID- 19 vaccine free of charge to 15 countries with a waiting list of a further 25 nations according to Indian External Affairs Minister S Jaishankar.

In the last week of January alone, more than five million doses were shipped to countries in India’s extended neighbourhood from Myanmar and Bangladesh to Mauritius and the Seychelles. In total, India has pledged to supply more than one billion coronavirus vaccines to various countries and to the Covax initiative.

The case of South Africa is particularly urgent as it contends with a new, stronger variant of COVID-19 driving a second wave of infections in the country. It is already the most drastically affected country on the continent with more than 1.46 million infections and the highest mortality rates.

South Africa too received one million Oxford/AstraZeneca vaccines from India this month. The country’s representative led a scathing attack on western countries at the WTO TRIPS council of 10 December 2020, calling out their bilateral procurement deals as ad hoc, non-transparent and unaccountable bilateral deals that artificially limit supply and competition and reinforce “vaccine apartheid” while enlarging “chasms of inequity.”

In stark contrast to its rhetoric, the EU has come out poorly as a global actor. Its vaccine monopoly and nationalism are fueling a widening gap in access around the world, risking further virus mutations.

The current situation not only tarnishes the EU’s humanitarian record, but the bloc is also failing to seize the opportunity to reinforce its existing ‘strategic partnerships’ with both India and South Africa.

The EU needs to urgently step up its role in ensuring greater access to COVID 19 vaccines and other necessary related medical equipment amongst less affluent nations. The European pharmaceutical infrastructure and supply chains are inadequate to meet urgent global vaccine demands.

Proffering support to India would go a long way towards meeting the global vaccine demand and ending the pandemic.

To circumvent the IP waiver, the EU along with wealthy nations could also consider purchasing licenses for third countries which would allow the overcoming of intellectual property monopolies while also incentivizing private investment into pharma sector R&D.