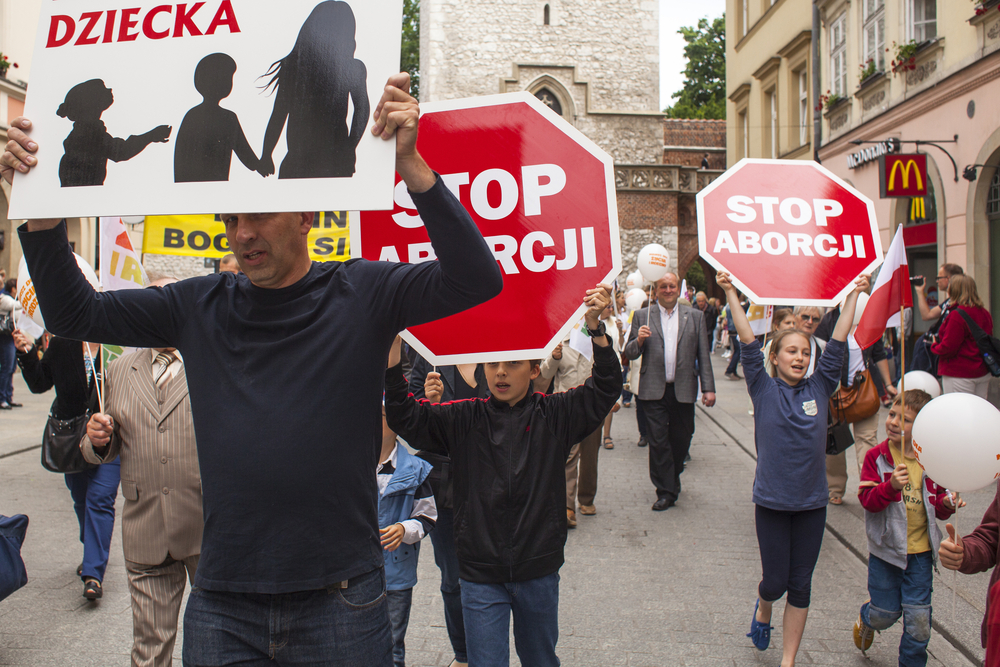 It would have been hard to miss the recent furore caused by Donald Trump’s flip-flopping around on the Republican abortion bandwagon. But frankly, what worries me much more is what is happening here in Europe, writes Caroline Hickson.

In Poland, a “Stop Abortion” civil committee has succeeded in submitting a draft bill introducing a complete ban on abortion and a new category into the criminal code entitled “pre-natal murder” which will introduce a penalty of three to five years in prison for women, doctors and anyone helping a woman to perform an abortion. The draft law makes no mention of the protection of a woman’s life, health or wellbeing. The civil committee now has three months to collect 100,000 signatures to ensure the bill will be debated in parliament.

Poland is not the only European country where we are seeing regressive tendencies in women’s rights. Around the region, from Spain and Italy to Latvia, Lithuania and Russia, groups that vehemently oppose abortion, sexuality education, contraception and gender equality are chipping away at existing laws and fighting to erect new obstacles. Just this week, the Council of Europe announced for the second time  that Italy is violating women’s human rights by failing to ensure they have access to legal abortion in the face of widespread ‘conscientious objection’ on religious grounds by doctors.

This increasing push to the right is reflected in attempts to use the EU, as opponents of progressive values pay lip service to human rights and seek to create support for their agenda at international level. For example, we see groups such as the ultra-conservative ADF International using arguments about “conscience” and “family values” to try and persuade the European Parliament to block progress on any initiatives related to people’s right to sexual and reproductive health.

As an Irish woman, this backward trend has particular resonance for me. My own country’s shameful history of hideous disregard for women’s health and rights was a driving force in my joining an organisation that champions sexual and reproductive health and rights.

Looking recently at a map of the World’s Abortion Laws, where green is the most unrestricted, and red highlights countries where abortion is either completely prohibited or allowed only to save the life of the mother, I was therefore unsurprised to see one stark stand-out red dot at the Atlantic edge of Europe within what is otherwise pretty much a sea of green.

But as I looked at the red dot, I finally felt some small hope that Ireland can change, that it is growing up.  Citizen’s voices are being heard, especially those of young people.  Humanity and rights are overcoming dictatorship and dogma.  In my wildest dreams as a young woman in the 1980s, I could not have imagined the glory of that day last May when the courtyard of Dublin Castle bloomed with rainbow flags and a new era in which all citizens were free to love and marry the partner of their choice was born.

I have little illusion, however, that allowing Irish women to have basic choice over their own bodies is an even tougher proposition. No-one who has lived through the pain and vitriol that has accompanied every stage of the abortion debate in Ireland could underestimate the battle we still need to fight.  But every day that brave women and men speak out, share their stories, campaign and lobby, brings hope that at least some change is in the air.

So it strikes me as frighteningly ironic that as Ireland finally takes slow steps along the road of human progress, the chance of bumping into countries like Poland (already in the deepest shade of orange on the map) travelling in the opposite direction becomes ever more possible.

It is clear that as European nations and as a European community, we are increasingly lost. Economic crisis, migration and the rhetoric of populist self-interest are challenging our very soul as a leader in social democracy and human rights.  We are being caught in a web of conservatism that is pushing in from both East and West. From Putin’s attempts to broaden his influence in Eastern Europe through promoting Russia as a moral bulwark against the loss of family values in the West, to the American far right’s insidious attempts to support and build a similar movement across the Atlantic.

Ultimately, citizens like the Polish women who stood up and walked out of church this month in protest, have the power to bring about change. Ongoing attacks on human rights around Europe show us that freedoms are fragile, and we cannot afford to be complacent. But the ever more vocal public support for sexual and reproductive rights in Ireland gives me hope that over time, that map of Europe can become greener.