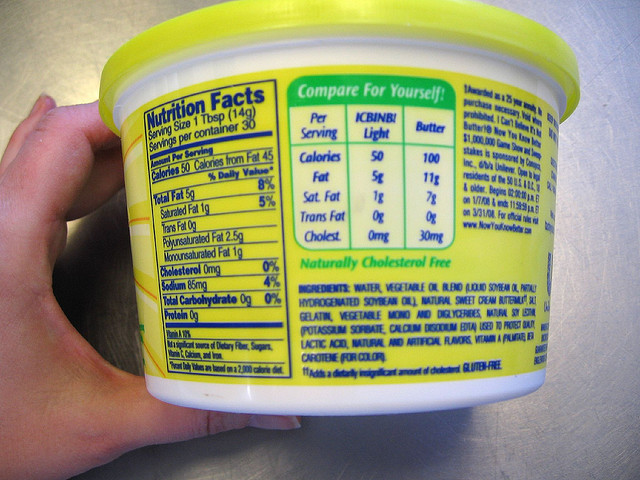 Current labelling requirements of fats in food products are misleading. At the moment, the only way for consumers to know if trans fatty acids (TFAs) are potentially present in food products is to check if hydrogenated oils are listed in the ingredient list. But this does not tell consumers the real TFA content of foods.

Consumers are more and more opting for healthy eating patterns. The European Commission welcomes this significant change in consumer behaviour and aims at stimulating this trend even more by introducing regulations on e.g. labelling or by formulating recommendations on proper daily intake of different nutrients.

Although we are in favour of these regulatory efforts, we sometimes question their impact on consumer behaviours. This is certainly the case with the current labelling requirements for vegetable oils and fats.

Food products can contain TFAs, a specific type of unsaturated fat. TFA originate in food from two main sources: either from animal (ruminant) or from vegetable (non-ruminant) origin.

TFA have been shown to consistently be associated, in an intake-independent way, with an increased risk of coronary heart disease, a major cause of death worldwide. According to EFSA, the European Food Safety Authority, there is no sufficient evidence to believe that ruminant TFA have a different effect on human health than non-ruminant TFA, when consumed in equal quantities.

The labelling of the TFA content or the use of claims such as “TFA free” are prohibited by EU legislation. Yet the compulsory mentioning of full or partial hydrogenation does not give any information on the actual TFA content. And it does not help the consumer in making the right and healthy choices, as it is often misunderstood. According to a Danish study, consumers confuse full and partial hydrogenation.

We also believe that the current mandatory labelling stigmatises the European margarines and spreads industry wrongly. This is difficult to swallow for an industry which realised major improvements during the last 20 years in bringing down the TFA levels in their products to a level below 2%.

This is a level upon which there is no longer a public health concern, according to EFSA.

At IMACE, we have been supporting all industry efforts to reduce the TFA level in margarines and spreads. These efforts include reformulation and optimisation of refining processes. In order to assess the impact of all these efforts, we have conducted a data collection and analysis. These show that the current TFA levels in retail margarines and spreads are well below 2% on fat basis.

In business-to-business margarines, TFA content has decreased from 7.1 to 1.4% on fat basis in the last decade. Due to the successful reduction of the non-ruminant TFA sources in vegetable oils and fats, over 60% of the current TFA intake in Western Europe is now coming from ruminant sources.

As the current main TFA source in Western European diets is ruminant TFA, and given the fact that both TFA sources are equally ‘detrimental’ to public health, we are of the opinion that the specific consumer information on TFA should be dealt with in an equal way as well. It is important that consumers get the correct messages, when it comes to quality of all fats in their diet.

Hence, for IMACE, any new policy regulation on TFA should imply an equal treatment of all TFA sources. This includes the deletion of the mandatory but misleading and discriminatory labelling of ‘partially hydrogenated’ versus ‘fully hydrogenated’ vegetable oils.