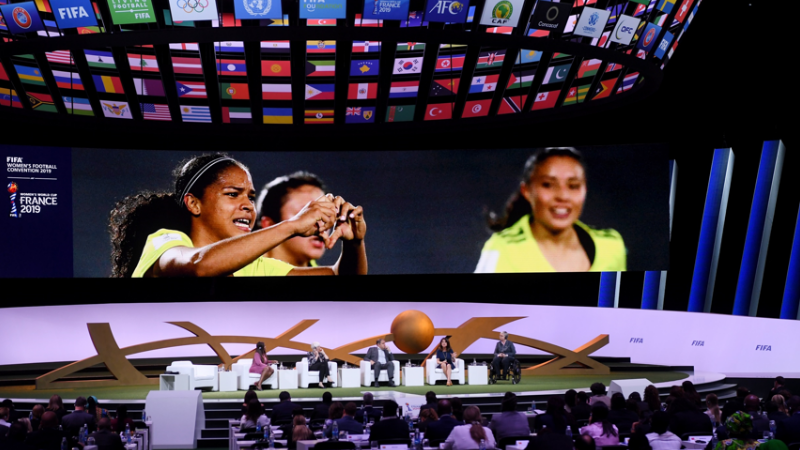 The kick-off of the eighth edition of the FIFA Women’s World Cup™, the biggest women’s single‑sport event on the planet, was not the only marquee occasion in France last week. On the eve of the tournament, a stellar line-up of global leaders from the worlds of football, politics, business and society assembled in Paris for the first FIFA Women’s Football Convention.

Gender equality on the pitch and beyond

The first day of the convention was dedicated to women’s football practitioners and representatives of FIFA’s 211 member associations and the six confederations. They explored and debated the five pillars of the FIFA Women’s Football Strategy, which was launched in October last year with the key objectives of growing participation, increasing commercial value and building upon the current foundations of the game.

On the second day, political leaders, commercial partners, senior representatives of international organisations and high-profile players gathered to discuss the challenges facing the women’s game, the barriers to growth and the opportunities for development. The main focus was on how sustainable strategies, programmes and partnerships can contribute to both women’s football and a more diverse and inclusive society.

Just hours before the exhilarating opening match between France and Korea Republic got under way, the first FIFA Women’s Football Convention was rounded off with a clear intention to move from words to action.

The two-day convention covered a number of topics within key areas of women’s football, with the current state of play and the future of the game very much at the forefront of the discussion.

There was general agreement that the growing investment and support have put the game in the strongest position it has ever been in, but that challenges nevertheless remain. Moreover, there was a genuine feeling that member associations and confederations should use the FIFA Women’s World Cup France 2019™ as a springboard to further develop women’s football in their regions.

But there was a wider theme present throughout the convention: empowerment and gender equality. All participants agreed that this should be a focal point and that women’s football could have an impact in this area.

The highlight of the convention was the signature of the first-ever MoU between FIFA and the United Nations Entity for Gender Equality and the Empowerment of Women (UN Women). The organisations agreed to join forces through football for the benefit of women and girls around the world.

In line with UN Women’s three-pillar strategy focusing on policy, legacy and advocacy to promote sport as a tool for achieving gender equality, the MoU foresees collaboration on sports policy initiatives as well as sustainable projects that will help women and girls to build leadership skills, confidence and overall autonomy. In addition, FIFA and UN Women have pledged to promote gender equality and women’s empowerment through awareness-raising activities using influential channels like FIFA’s major competitions and well-known football legends.

The document, which outlines the general framework of cooperation between the two organisations, will be followed by a concrete cooperation plan laying out joint actions and a detailed roadmap.

Speaking about the convention, FIFA’s Chief Women’s Football Officer, Sarai Bareman, said: “By bringing in leaders from the business world, international organisations and the media, we raised awareness about women’s football and its impact in terms of health, empowerment and providing positive role models for women and girls around the world. In doing so, we were able to map out some important steps to build a brighter future, not only for women’s football but also in society.”