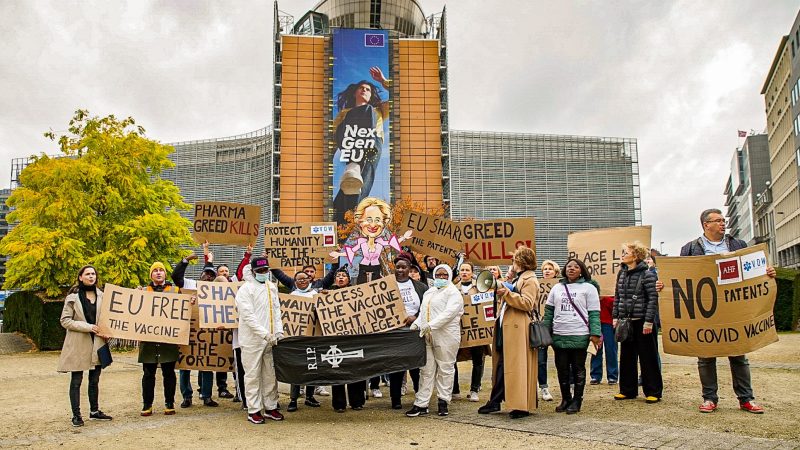 The novel coronavirus has shown glaring deficiencies in the world’s collective ability to respond to infectious disease outbreaks, with none more evident than wealthy countries’ self-destructive unwillingness to cooperate on vaccine equity for the benefit of the entire global population. Vaccine makers’ pandemic profiteering, which a handful of rich nations (including the European Union) have so far endorsed, has only served to exacerbate the great global disparity between the vaccine haves and have-nots.

As of mid-October, 3.77 billion COVID-19 vaccine doses, enough for nearly half of the global population, had been administered worldwide. But sadly—and predictably—almost 80% of those shots have gone into the arms of people in high- and upper-middle-income countries. Low-income countries haven’t even seen 1% of those doses, and less than 8% of people in Africa, which has a population of roughly 1.3 billion, have gotten even one shot.

According to Duke University, it’s no surprise that there are not enough doses to vaccinate our world when wealthy countries have secured enough vaccines to inoculate their populations as much as five times over. Even though the world will have created 11 billion total doses by the end of this year, almost 9.9 billion of those have already been promised to wealthy nations.

The COVAX initiative, while initially promising, was supposed to supply lower-income countries with sufficient vaccine doses. However, that mechanism has fallen short of its initial goal to vaccinate 20% of recipient countries, which is still far too little when the World Health Organization (WHO) states that a vaccination rate of 70% is required to protect the world.

A debate in the US and other high-income countries now centers around booster shots, while Africa, Latin America, and other hard-hit regions struggle. WHO Director-General Tedros Adhanom Ghebreyesus recently said it was “unconscionable” that some countries are now offering booster shots “while so many people remain unprotected.”

As if fighting the novel coronavirus wasn’t enough, the world must also battle the might of pharmaceutical industry attorneys and lobbies. They have done everything possible to hamstring and bully heads of state into agreements that only serve to “silence governments, throttle supply, shift risk, and maximize profits in the worst public health crisis in a century,” as reported by Public Citizen. According to Action Aid, Moderna, BioNTech, and Pfizer are reaping astronomical and unconscionable profits, with the corporations having earned more than $26 billion in revenue in the first half of 2021.

Nations have spent trillions of dollars fighting the novel coronavirus—and lost trillions in productivity with their economies devastated. Robust economic health is vital for all countries’ progress and recovery from the pandemic. Yet, there can be no real recovery for anyone until the world is free from the threat of COVID-19 – which can only happen when everyone has access to vaccines.

The time has come for leaders of wealthy G20 and EU countries to remedy the injustices they have allowed humanity to shoulder during the COVID-19 disaster by prioritizing vaccine access for the majority of nations still desperately waiting for the lifesaving shots. That must start by mandating that pharmaceutical companies share their know-how and technology to increase production globally.

Taxpayers were the primary funders of COVID-19 vaccine research, development, and production – the world owns that intellectual property (IP) – not the drug companies profiting while the world suffers. Even though it’s finally showing some flexibility, the EU largely has stood firm against the World Trade Organization’s IP waiver that would increase vaccine availability exponentially. It’s time EU leaders use the G20 to remove IP barriers to ensure increased generic vaccine production worldwide.

While there has been no unified voice or leadership in response to the COVID-19 pandemic since its onset, advocates from the Vaccinate Our World (VOW) call-to-action, spearheaded by AIDS Healthcare Foundation (AHF) and guided by its G20 Manifesto, are attempting to even the playing field for vaccine access. The campaign demands that world leaders do everything necessary to ensure vaccines get to everyone who needs or wants them, not just people in wealthy countries.

Under the VOW banner, AHF’s Europe Bureau has taken the fight for vaccine access to Europe’s doorstep with a dramatic artistic performance at the Delegation of the EU to Ukraine in Kyiv, which coincided with the EU-Ukraine Summit on October 12. Activists demanded fair vaccine distribution with another protest the next day at the International Justice Court in The Hauge, Netherlands. On October 20, AHF organized similar demonstrations to reach EU and G20 leaders with actions in London and a final rally before the G20 Summit at the European Commission in Brussels.

More vaccines and less profit-seeking are essential to ending the pandemic, but G20 and EU leaders must also take additional steps. These include securing at least $100 billion, enough to vaccinate our world, committing to international cooperation as the most fundamental way to address pandemics, and drafting a new Global Public Health Convention to serve as the worldwide health governance system to rapidly respond to future outbreaks.

The global COVID-19 response has been abysmal since the start, but G20 and EU leaders can rally together and be a united force for the world’s good. All nations are in danger if even one country is under threat from COVID-19 with no access to vaccines. The G20 and EU must acknowledge that reality and act accordingly. The fate of humanity is in their hands at the upcoming Summit—by ensuring vaccine equity, they can save the world.