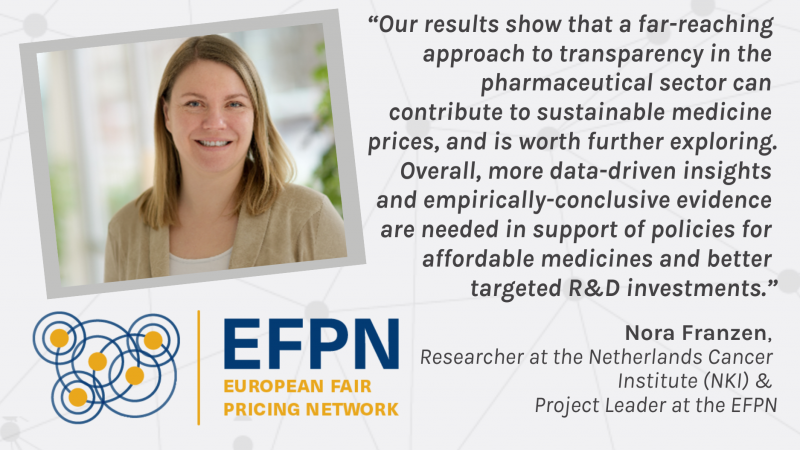 Nora Franzen is a Researcher at the Netherlands Cancer Institute (NKI) and Project Leader at the European Fair Pricing Network (EFPN).

Affordability regulation and innovation are not mutually exclusive if well designed. This is what independent research at the Netherlands Cancer Institute (NKI) and the University of Amsterdam (UVA) has now shown. More transparency can actually improve access to affordable medicines, provided that prices and R&D costs are both made public.

The research groups led by Wim van Harten (NKI) and Theo Offerman (CREED, UVA) carried out the world’s first laboratory behavioral experiment empirically investigating the effects of transparency on R&D prices, patients’ access to medicines, and R&D investments. The results of this experiment were recently published in Cancer Research Communications together with a commentary in Cancer Discovery. There, the authors argue that more empirical evidence needs to be collected to guide policies to increase the affordability of cancer medicines. Up until now, policy suggestions intended to counter high pricing have primarily been discussed based on opinions and theoretical arguments, as previously published research by the NKI has shown.

Research into innovative medical therapies against cancer is undergoing rapid developments. Nevertheless, new anticancer therapies, like immunotherapy, can be extremely expensive and prices are increasing. High prices are a major barrier to accessing medicines and pose a serious threat to patient health outcomes and care. In the long term, this increase in costs puts additional pressure on the sustainability of hospital budgets and health care systems. National governments and their citizens face a conflicting situation: Science is progressing and making innovative treatments available, but these treatments come with high price tags.

Secrecy
As often suggested, a potential solution to this problem may be price transparency. The pharmaceutical sector is highly secretive and opaque. The cost of R&D is not known and price negotiations between European governments and pharmaceutical companies are subject to confidential clauses. Prices can vary significantly between countries, as some nations are able to negotiate substantial discounts on the real price, while others are not.

Therefore, even payers are not aware of how high their negotiated prices are in comparison. Pharmaceutical companies often state that discounts enable them to offer lower prices to poorer countries. They also claim that the current high prices are necessary to cover high R&D costs and that cost transparency could deter R&D investors. Proponents of greater transparency argue that secrecy drives these high prices and hinders effective investments.

Full transparency led to 26% lower net prices
Our researchers explored the following question: Does sharing information between countries negotiating prices with the pharmaceutical industry have an effect? In other words, will prices change, are more patients treated, and can R&D investments remain stable?

The answer based on this laboratory experiment is yes, but only if there is full transparency – combining open prices and R&D cost. Net prices then decreased by 26% while R&D investments remained stable despite the reduced expenditure. With price transparency alone, pharmaceutical prices remained unchanged, but R&D investments decreased. Truthful reporting of R&D cost offered an opportunity for risk sharing, which stimulated R&D investment when prices were reduced, likely because companies had more certainty that their investment decisions will yield sufficient return.

In this experiment, the 400 participants (students) acted out the roles of their own governments in negotiation with pharmaceutical companies (also students) about the price of an innovative anti-cancer drug. They were divided into three experimental arms:

The participants were, according to the perspective they represented and their performance, financially rewarded for successful negotiation.

European push towards transparency  in the pharmaceutical sector
The increasing calls from cancer societies, NGOs, payers, and other stakeholders to make price negotiations of expensive medicines more transparent are now being heard by policymakers.

The European Commission started to review the Directive 2001/83/EC and Regulation (EC) No 726/2004 to align the scientific developments with the regulatory and legislative dispositions. New scientific advancements come with new challenges for healthcare systems, as the latter are not necessarily equipped to embrace expensive medicines with sometimes uncertain clinical evidence. In November 2021, the European Parliament (with an overwhelming majority) adopted a report proposing to make medicines more available and affordable, boost transparency on prices and promote joint EU public procurement. Also, at the national level discussions are starting to spread and address transparency issues building on the World Health Assembly Transparency resolution adopted in 2019. As an example, at the national level, the Dutch new government’s coalition agreement explicitly includes transparency as a tool to achieve lower costs.

In November 2020, ten European Cancer Societies launched the European Fair Pricing Network (EFPN) – the first-ever EU-wide collaborative network to improve transparency, access and affordability of cancer medicines for the benefit of cancer patients. EPFN has invested €1 million to team up with the Netherlands Cancer Institute and the Organisation of European Cancer Institutes (OECI) to shed a light on medicine pricing and translate findings into evidence-based policy asks for national and European decision-makers.

EFPN partners will disseminate the results of the study carried out by The Netherlands Cancer Institute and the University of Amsterdam, as well as conduct evidence-based advocacy campaigns to better link research to policy-making.

NB: The research described above was sponsored by a philanthropic unrestricted grant, not by the EFPN.